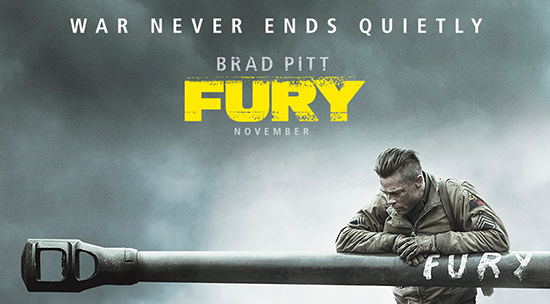 There are few things in this world as brutal and unforgiving as war. Often laying waste to built up areas and affecting the lives of many, war is just one of those things we wish didn’t happen at all.

Over the years, Hollywood has produced many films depicting the horrors of war, whether that be World War One, World War Two, the Vietnam War or more recently, the war in Iraq. For me, the best are the ones not afraid to show the war in all of its brutality. Fury is a war film as hard-hitting as they come.

It is April 1945 and the crew are sent on a dangerous mission to strike at the heart of Nazi Germany. With the German tanks far more advanced, they soon find themselves deep behind enemy lines, outgunned and heavily outnumbered.

Fury has two major strengths at hand to make it such an engrossing war film and that is its strong cast and talented director, David Ayer.

Brad Pitt, as expected, brings an experience and steeliness befitting of his name “Wardaddy”, Shia LeBeouf shows that his fine performance in Lawless was no fluke, Jon Bernthal continues to make an impression on the big screen after an impressive run on TV’s The Walking Dead and Michael Pena returns to work with David Ayer after the pair worked so well together on End of Watch.

The stand-out performance from Fury though is Logan Lerman. The young actor has already an impressive number of films under his belt but Fury is his best performance to date. Lerman’s Norman Ellison is timid and thrown into a situation he feels uncomfortable in yet, after experiencing the horrors of war for himself and with guidance from “Wardaddy”, he becomes hardened and a cold-blooded killer worthy of the code name “Machine”. It really is a performance of great maturity.

David Ayer’s war film, which he also wrote, mixes a character driven story with pulsating action to great effect. The intimacy of the crew in the tank is captured perfectly by Ayer’s script and when it comes to the battle scenes, he directs them with such fizz that the audience will be on the edge of their seat.

While Fury doesn’t reach the same heights as Saving Private Ryan or Apocalypse Now, it is still a solid war drama with strong performances from its cast and a director on top of his game.