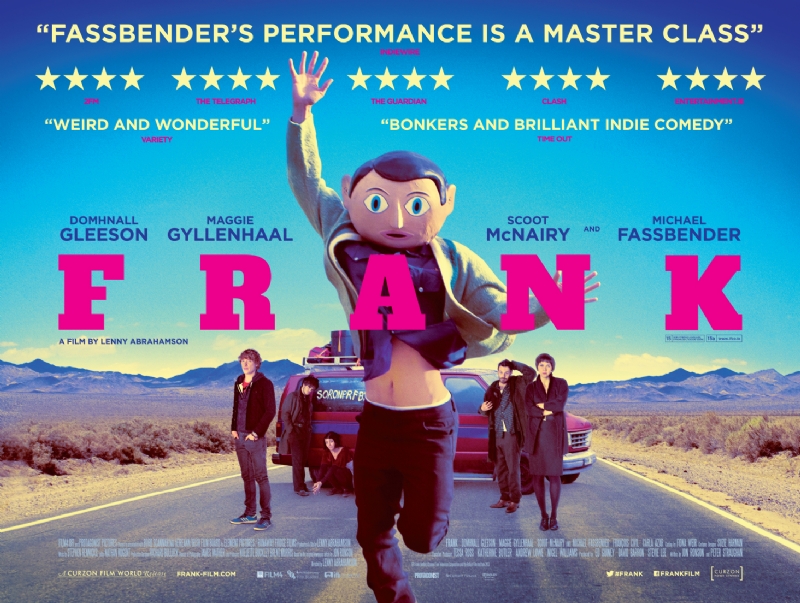 There has been a positive buzz around Frank ever since it premiered at Sundance earlier this year. Truth be told, that buzz is thoroughly deserved.

Frank is one of the more intriguing films of 2014 and with a quirky story and its titular character spending the majority of the film wearing a paper mache head, it was a joy to watch from start to finish.

Frank is a journey of self-discovery that sees young wannabe musician Jon (Domhnall Gleeson) join Soronprfbs, a band desperately trying to find their own identity and sound. Jon travels to Ireland with the band not realising that they won’t be leaving until they have recorded the perfect album.

With the mysterious Frank (Michael Fassbender) at the front of the band, Jon soon finds that being in a band is harder work than he first thought.

One of the most striking things about Frank is the confidence the whole film had to be as weird as it did. A film could easily alienate itself from an audience by being too weird but much like Little Miss Sunshine back in 2006, Frank is a film that will have its weirdness embraced by the audience.

At the centre of all the peculiar goings on is Michael Fassbender as lead singer of the band, Frank. I was surprised when I saw that one of the biggest actors in Hollywood was taking a role that consisted of him performing behind a paper mache mask for the majority of the film. It does seem like a risky role to take but ultimately, Fassbender would not have taken the chance if he was not fully confident in the director, the writing and his fellow cast members.

It is a choice that pays off and Fassbender should be immensely proud of his performance in Frank. He captures both the comedic and dramatic elements of the character perfectly, excelling in his final scenes without the mask.

Domhnall Gleeson is on good form again as the awkward Jon, having already impressed me in romantic comedy About Time not so long ago. Maggie Gyllenhaal and Scoot McNairy provide stellar supporting performances as other members of the band who go through their own fair share of trouble.

Director Lenny Abrahamson and writers Jon Ronson and Peter Straughan should be given a lot of credit for the way they have handled the film with care. Abrahamson’s direction allows an intimate insight into the everyday struggle of a band trying to make it big while Ronson and Straughan deliver a fine screenplay that manages to be both silly and touching, which is a good thing when sensitive issues such as loneliness and mental illness are prime themes.

Frank is one of 2014’s best offerings so far and with one of Michael Fassbender’s best performances to date it is definitely one you should try and see.