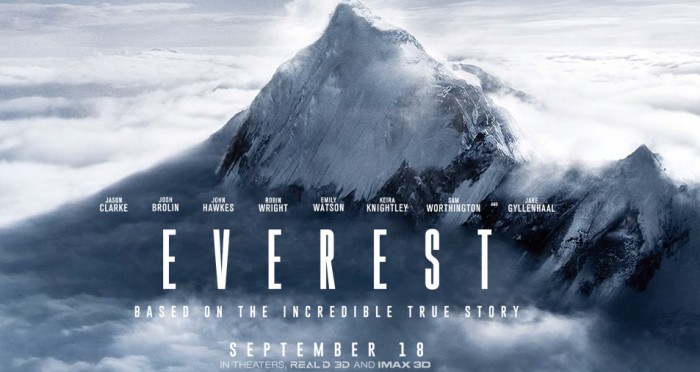 Remember when the IMAX format was used sparingly? There would only be a select few films a year released in the said format but now it seems to have become a bit of a gimmick. Many films released in IMAX screens nowadays don’t take full advantage of the format and use it as a ploy to make more money.

Everest is more of an experience as opposed to just a film, along the same lines as Gravity. While it doesn’t reach the same heights as Gravity, Everest makes full use of the larger image and sharper sound that the IMAX format offers.

In 1996, a climbing expedition, led by Rob Hall (Jason Clarke), aimed to reach the summit of Mount Everest. Often regarded as one of the most dangerous places on the planet, Everest takes no prisoners; a fact we are made well aware of before the film even gets going.

When a severe snow storm hits the mountain while Hall and his party are on their way down from the summit, they face a monumental challenge to stay alive. The brutality of Mother Nature certainly takes its toll however, it also brings out the one thing that every human possesses; the natural instinct to survive.

Everest is by no means a classic but it is a powerful example of how spectacle and narrative can be combined to great effect. We all know just how big Everest is but through Salvatore Totino’s cinematography and some well executed shots, the sheer scale of the mountain becomes something else entirely. The mountain is brought to life in the film as one of the most beautiful and scary places on Earth.

As expected nowadays, the special effects are flawless and on an IMAX screen, Everest looks stunning. The brilliant sound editing adds to a totally immersive experience for the audience.

At the heart of Everest and amidst all the glorious visuals is a moving story about survival with a well written screenplay from William Nicholson and Simon Beaufoy. They avoid turning Everest into your usual cheesy disaster movie which may be down to the fact that this is based on a true story and there were fatalities.

Each and every one of the cast delivers a good performance and no one lets the film down in any way. I thought Jason Clarke, Josh Brolin and Emily Watson were the best of the bunch and was surprised to see Jake Gyllenhaal play a smaller part in proceedings than I initially thought he would. Robin Wright and Keira Knightley too have small roles but they both sell it as the wives at home waiting to hear news on their husbands.

Everest is quite an intense ride that pushes the IMAX format to its absolute limits. Stunning visuals and solid performances make it a film you have to see on the biggest screen possible and definitely one of the best films to involve mountain climbing, better than Vertical Limit anyway.