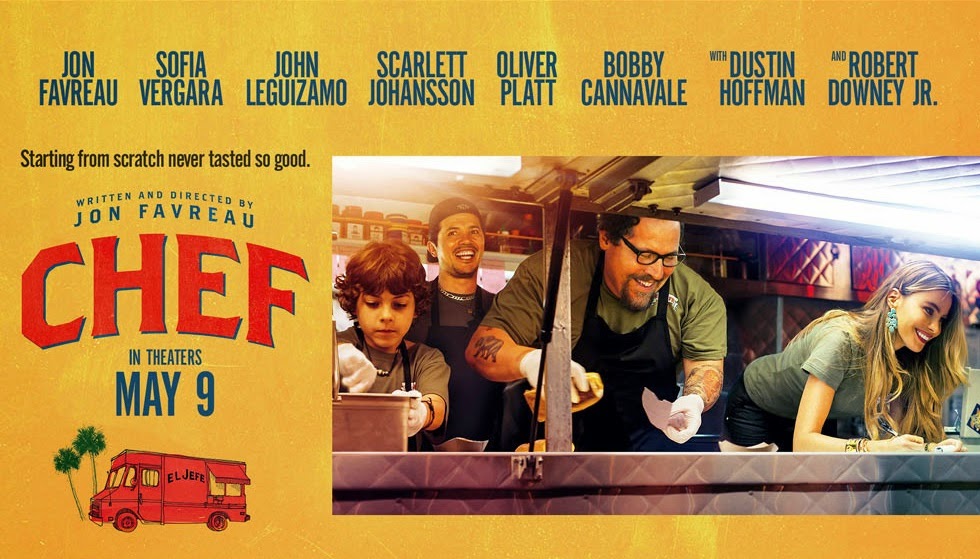 WARNING: FOR YOUR OWN GOOD DO NOT, I REPEAT, DO NOT GO AND SEE CHEF ON AN EMPTY STOMACH!

Jon Favreau is easily one of the most likeable guys working in Hollywood today. When it comes to filmmaking, he is a man that is often seen involved just as much behind the camera as he is in front of it.

Favreau stars as Chef Carl Casper, a chef who prides himself on his creative abilities with food. Forced by his boss Riva (Dustin Hoffman) to stick to what they know best, Carl gets trounced by famous food critic, Ramsey Michel (Oliver Platt) and ends up without a job.

Encouraged by his ex-wife, Inez (Sofia Vergara), Carl acquires a food truck and with the help of his best friend, Martin (John Leguizamo) and son, Percy (Emjay Anthony), he is free to let his creativity with food loose.

With being a busy chef, Carl never spent too much time with his son Percy however, the food truck and the tour they take it on across America is the perfect chance for the pair to fix that.

On this occasion, Favreau is on great form both behind the camera and as the lead of the film. You can be forgiven for forgetting about Favreau as an actor but Chef is a timely reminder that he is a fine comedy actor.

One highlight is Carl’s outburst to Ramsey Michel after his negative review, a scene where Favreau had the audience in fits of laughter. I like to think one day that’s how Michael Bay will react to the next critic that rips apart a Transformers film.

The screenplay is sharp and witty and with an outstanding ensemble cast on top of their game, the two hour runtime just flies by. John Leguizamo in particular is great to watch in every one of his scenes.

Chef could have become a showreel of the friends in Hollywood that Favreau has but it avoids that smartly. Robert Downey Jr., Scarlett Johansson and Dustin Hoffman have minor roles when they could have been shoved front and centre. This is Favreau’s baby and he is going to have his moment.

Another feature of Chef that I found interesting was its use of social media throughout. You cannot go anywhere now without anybody talking about Facebook, Twitter, Instagram or Vine so to see them used so prominently was a move that worked well, especially towards the relationship Carl shares with his son.

Chef also features a soundtrack so fitting that along with the performances and themes of the film you will have no choice but to leave the cinema with a smile on your face.