With the 21st feature film of the Marvel Cinematic Universe, Marvel Studios have their first female-led superhero film in Captain Marvel. This is something that should be celebrated but we unfortunately live in a world where internet trolls try and trash a film before it’s even released, the most ludicrous I’ve seen being someone liken Brie Larson herself to Adolf Hitler. Those of us who have actual working brain cells know that any film should be given a chance and with Captain Marvel, the potentially new “strongest Avenger” has an introduction that may not set the world alight but certainly does its job competently.

With Earth caught in the middle of a war between the Skrulls and the Kree, Carol Danvers (Brie Larson) becomes one of the most powerful heroes in the universe, all while trying to uncover her past and how this came to be. 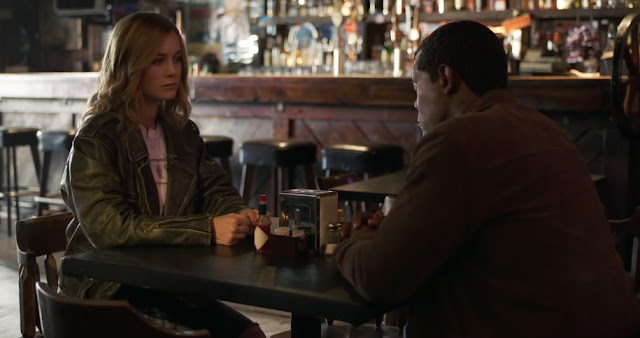 With her presence in the MCU teased on Nick Fury’s pager at the end of Avengers: Infinity War and before she inevitably shows up to kick all sorts of ass in Avengers: Endgame, Captain Marvel rightfully gets her own origin story brought to life on the big screen. If you can make it through the opening tribute to Stan Lee in a clever change to the Marvel Studios logo without get teary eyed, what follows is a film that does a fine job in introducing the MCU’s original hero while providing an inspirational figure for many around the world, adults and children alike, to rally behind.

I wouldn’t say there is anything groundbreaking here narrative wise, the first twenty minutes actually being a bit of a drag, both the exposition heavy script and badly lit action sequences making me think this was going to be a a struggle to sit through. That being said, once the action moves to Earth and our hero finds herself teaming up with Nick Fury, a fantastically de-aged Samuel L. Jackson, it feels as if the shackles are off and it just gets better from there.

The more she finds out about her past the stronger she seems to get, the moment this film depicts her realising her true potential being one of those MCU moments many will remember for years to come. Seeing her use her powers to their full potential and the first end credits scene got me incredibly excited for how she will contribute in Endgame. 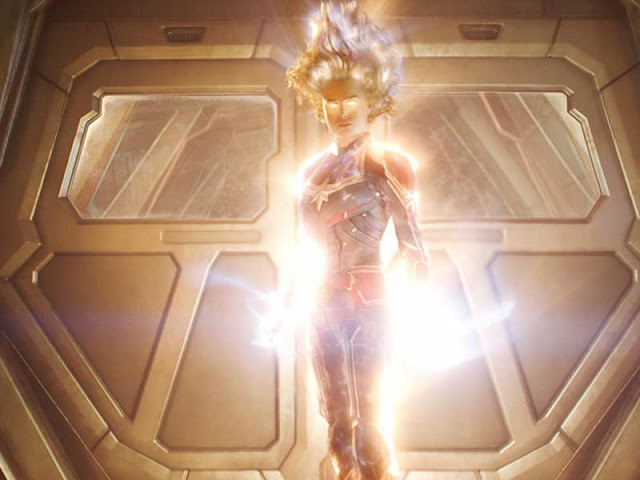 Coming to the performances, there isn’t anyone who phones it in at all. Brie Larson has been targeted by the trolls prior to release saying she can’t act but her performance here is very good, understated in many ways. There’s a vacant aspect to Danvers’ character, due to the holes in her memory, and Larson portrays this well, only getting better with the role as Danvers begins to realise her potential. Pairing her with Samuel L. Jackson, who she shares great chemistry with, is a stroke of genius to drive the film and some of its more comedic moments forward. Jackson is really good as a Fury who isn’t used to all the superheroes just yet and he sells the WTF feel damn well, as expected.

There’s stellar support for Larson elsewhere in the form of Ben Mendelsohn, who delivers yet again as the villainous commander of the Skrulls, Talos. He’s funny but he’s also fleshed-out well enough to understand his motives towards Danvers. Lashana Lynch is the best of the rest as Danvers’ old friend, Maria Rambeau, giving plenty of emotion in the few scenes she has to make sure she leaves an impression. Much has been made of Goose the cat in this film and I’ll just say he does steal quite a few scenes, getting many big laughs throughout.

While I thought the character work was really good in Captain Marvel, the film is a little let down by some of the action sequences, particularly towards the start of the film. There’s two moments of action that were so dimly lit, it was near impossible to tell what was happening, the one towards the end being set to a song by No Doubt which felt very Guardians of the Galaxy, just not executed anywhere near as well. The visual effects are expectedly impressive, none more so than the de-ageing effects used for Nick Fury and Clark Gregg’s Phil Coulson, both looking ultimately flawless in this 90s throwback.

As an entry into the MCU at this stage, it doesn’t quite go higher, further or faster as the tagline suggests. What Captain Marvel does do though is introduce us to a new hero and flesh her backstory out just before she comes along and fucks Thanos’ shit up.