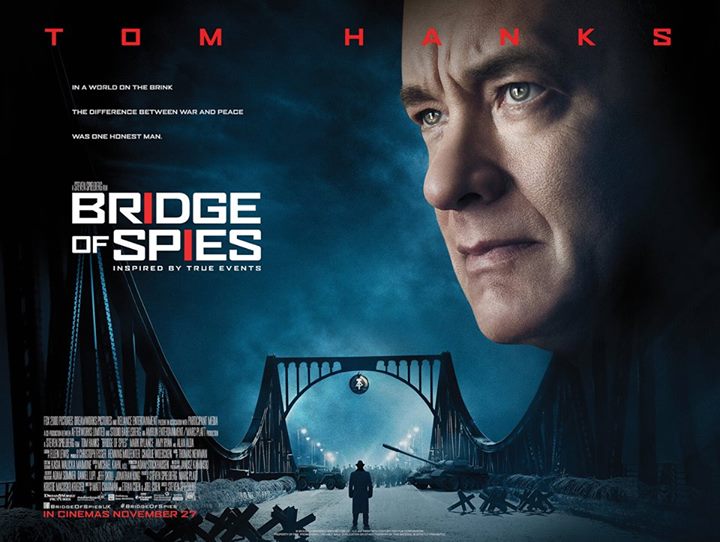 Bridge of Spies marks the fourth collaboration between director Steven Spielberg and actor Tom Hanks, a relationship that has gone extremely well thus far. Both of these Hollywood icons seem to bring the best out of each other and all things were pointing towards Bridge of Spies being another winner.

Telling the story of James B. Donovan (Tom Hanks), an insurance lawyer who, during the Cold War, is told he will be the defending Rudolf Abel (Mark Rylance) in court, a man believed to be a Soviet spy.

When the American U2 spy plane pilot, Francis Gary Powers (Austin Stowell), is shot down and imprisoned by the Soviet Union, Donovan is then tasked with negotiating an exchange with the Soviets; Powers for Abel at a time when tensions were very high between the two nations.

Spielberg is my favourite director and he will go down as one of the greatest storytellers in the history of cinema. Whether he’s dealing with a summer blockbuster or a lower budget drama, Spielberg finds a way for the film to connect with its audience, and Bridge of Spies is no different.

The sentimentality that can so often be found in a Spielberg film is usually the key component in that connection and it is ever present in Bridge of Spies, a film that depicts an event in history made possible by one honest man when some thought war was the only option.

There were some rewrites carried out on the script, written by Matt Charman however, when you can call upon the likes of Joel and Ethan Coen to spruce it up a bit, you know you are going to get real quality. Every word feels like it counts and there were some genuine moments where I was thinking to myself, “Yeah, these are the words of the Coen Brothers”, with dashing of light humour sprinkled throughout.

Coming to the performances, there were two that, unsurprisingly, stood out for me. Of course, Tom Hanks is one of them, playing the spirited Donovan with a performance full of such wit and charm that he becomes instantly likeable and a character the audience will be rooting for.

The other is the performance from the lesser known Mark Rylance, an actor known more for his stage roles than his work in front of a camera. As accused spy Abel, Rylance shares a chemistry with Hanks that sees Donovan and Abel seem more like old friends than strangers who have just met. Spielberg was so impressed with Rylance that he offered him the lead part in his upcoming adaptation of The BFG, due next year.

Weirdly, for a Spielberg film, the score was not composed by John Williams, who had to drop off the project due to bad health. Thomas Newman stepped up to the plate and, while he does a fine job, his score doesn’t do enough to evoke the emotions the way a score from John Williams would.

This isn’t Spielberg showing off with a big special effects laden film, nor is it a film about spies that you may expect. Bridge of Spies is however, a riveting drama with two Hollywood icons in top form. You’d be crazy not to check it out.