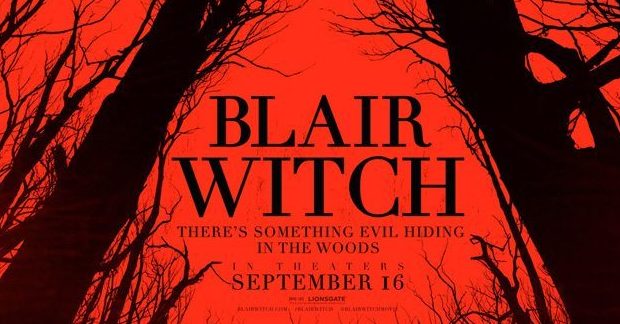 You know when a horror movie has a quote saying “One of the scariest movies ever made” attached to its trailer and then you see it and feel as if you were cheated by that movie because it wasn’t actually scary at all? Well, that’s so not the case with Blair Witch, the surprise sequel to The Blair Witch Project, a movie that redefined the horror genre back in 1999. Now, I’m no horror aficionado but Blair Witch is one of the most terrifying experiences I’ve had in the cinema.

Twenty-two years after his sister and friends disappeared while documenting their trip to investigate the Blair Witch legend, James Donahue (James Allen McCune) plus three of his college friends and two local residents venture into the same woods to try and find them.

Strange occurrences and a strong supernatural presence makes them come to the realisation that the legend of the Blair Witch is true and their lives are now the ones in danger.

First things first, I love how nobody knew anything about this being a sequel to The Blair Witch Project until barely two months ago at San Diego Comic-Con, having been filmed and marketed under the name The Woods, leading to a lot of talk and buzz about Blair Witch prior to release.

It’s great to see a director like Adam Wingard take on the challenge of making a sequel that isn’t just a carbon copy of its predecessor, instead choosing to take elements and build upon them to create a sequel that, I think, surpasses the original.

Blair Witch once again plays out in the found footage style that the original made so popular however, with the advancements in technology, there are more devices the filmmakers could use such as drones and go pro cameras rather than just the handheld models.

It makes for a much more intense and fear inducing experience when the cameras used to capture the footage offer more stability. There are a few really good sequences throughout because of this, including a few nailbiting first person shots that will leave you on the edge of your seat.

The use of sound too plays a pivotal part in building the audience’s fear, Wingard showcasing that he knows how to make an effective horror flick, the moments of silence proving unbearable at times.

The performances and script are always key in the difference between a good and bad horror movie. In Blair Witch, both are good enough for the audience to buy into the story. The stand-outs for me were either James Allen McCune or Callie Hernandez as Lisa, who has to do a lot of terrified close-ups in her role.

Blair Witch‘s strongest asset, like its predecessor, is the fear of the unknown. I said it about The Blair Witch Project and I’ll say the same about Blair Witch; it’s so good to see a horror movie willing to not blow its load early and keep the audience in the dark as much as the characters.