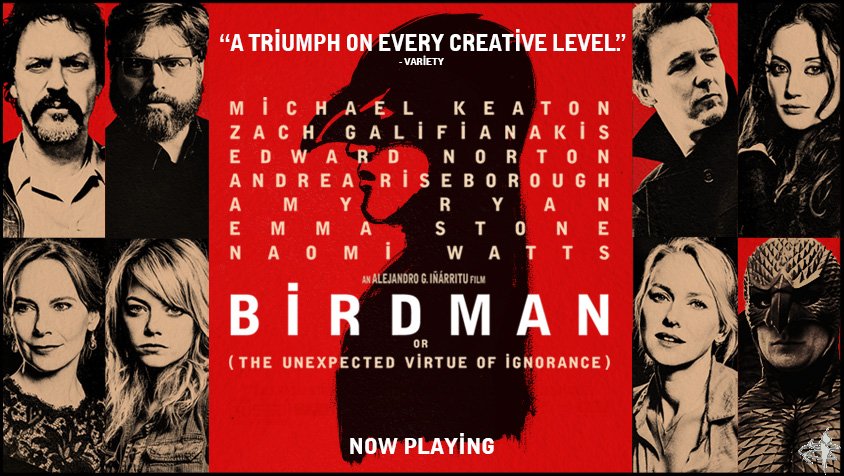 Birdman finally makes its long awaited arrival in the UK and trust me when I say; believe the hype.

Michael Keaton stars as Riggan Thomson, a washed-up actor once famous for playing the lead role of Birdman in a trilogy of highly successful superhero movies. With his reputation taking a beating after the third Birdman movie twenty years ago, Riggan decides it is time to reclaim his past glory in order for people to take him seriously again.

In order to do this, Riggan writes, directs and stars in a Broadway adaptation of Raymond Carver’s What We Talk About When We Talk About Love. The pressures of opening night on Broadway and keeping everyone in check soon takes its toll on Riggan and with the voice of Birdman tormenting him inside his head, it isn’t long before the cracks start to show.

The most striking thing about Birdman is director Alexandro Gonzalez Inarritu’s decision to shoot the film as if it is has been shot in one continuous take. Through tracking shots and some wizardry editing, Birdman becomes a fluent work of art the likes of which I have never seen before in a film.

For Inarritu’s film to feel like one continuous take, the services of Academy Award winning cinematographer Emmanuel Lubezki were acquired. Lubezki has worked on films such as Children of Men and Gravity; both of which famous for their visual style and in particular their long takes that remain as two of the most memorable in cinema. Lubezki’s signature is all over Birdman.

Birdman also boasts an impressive cast with Michael Keaton, Emma Stone, Edward Norton, Naomi Watts, Amy Ryan, Andrea Riseborough and Zach Galifianakis all starring. Not one of them puts a foot wrong and that plays a massive part in giving the film a feel of a continuous take.

Emma Stone and Edward Norton were stand outs for me but the MVP of Birdman is Michael Keaton. Keaton himself has had a few years out of the spotlight and 2014 saw him star in the forgettable Need for Speed and RoboCop. Birdman however is a welcome reminder of the fine actor Keaton is. He is brilliant as Riggan, nailing both the comedic and dramatic aspects of his character.

The film’s score initially felt like a weak link but as the film went on the more Antonio Sanchez’s work grew on me. It isn’t the greatest score you will ever hear but it suits the film down to a tee and that is the most important thing.

Birdman is a fantastically funny and witty black comedy with a wonderful cast and magnificent lead performance from Michael Keaton. Alejandro Gonzalez Inarritu’s beautifully crafted film is an exhilarating and often surreal reminder of the originality that still exists in Hollywood. If this is the way 2015 has started at the cinema then we really are in for one hell of a year.