Edgar Wright may not have made too many films however, he’s one of the few directors working today that can generate such a buzz for his projects, thanks to their originality and sheer entertainment value. His sixth film, Baby Driver, has been no stranger to positive word of mouth and it is well and truly deserved. Believe the hype because Baby Driver is a pure slice of fried cinematic gold.

After being coerced into working for a crime boss, young getaway driver Baby (Ansel Elgort) finds himself taking part in a heist doomed to fail, finding love along the way. 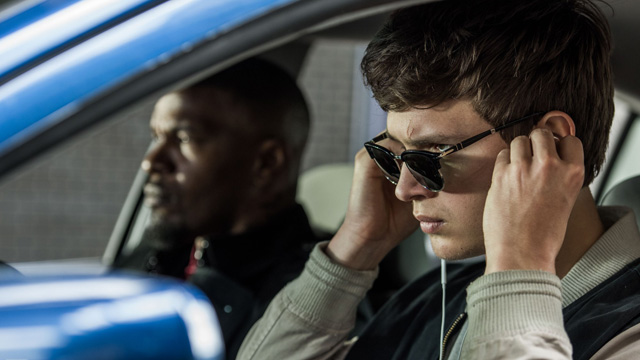 Wasting no time in dropping the audience right into the frenetic action, Edgar Wright’s Baby Driver is relentlessly paced throughout, building in kinetic energy as each chase sequence rises in intensity and magnitude, leaving you well and truly on the edge of your seat. Featuring incredible stunt work and some swift cinematography from Bill Pope, Baby Driver possesses some of the best chase sequences I’ve ever seen on film.

Another aspect of the film that elevates it to another level is the soundtrack Wright expertly utilises for not only the major chase sequences, but the smaller scale scenes too. Every song works so well, whether it be Tequila accompanying a shootout or Hocus Pocus playing over the film’s major chase sequence. Seriously though, the chase sequence that sees Baby trying to escape via both car and foot is just insanely well put together, Hocus Pocus being the real cherry on top.

Coming to the performances, Baby Driver features a small yet impressive cast, ranging from relative newcomer Ansel Elgort through to the seasoned pro that is Kevin Spacey. Elgort may not be as charismatic as you’d think however, he really does suit the role of Baby incredibly well because it isn’t a role that requires the most charismatic of actors. There are other roles in the film for that, one of them being Jamie Foxx as Bats, a member of the heist team who has a penchant for violence and running his mouth. This is the best I’ve seen Foxx for a while and, along with the rest of the cast, he looks like he’s having a ball.

Edgar Wright’s Baby Driver has an old school crime caper feel to it but with Wright’s sharp writing and knack for humour plus the amazing chase sequences at hand, it really does become something else entirely. This is sure to be one of the most original and thrilling films you could see all year.