Ten years ago, the Marvel Cinematic Universe (MCU) was birthed with Iron Man, a supremely confident film which resurrected a career and started a shared universe of unprecedented proportions. Eighteen films later and an impressive number of superheroes introduced on the roster so far, we arrive at Avengers: Infinity War, a film so hugely anticipated that even hiding under a rock wouldn’t let you escape it.

With relationships shattered after the events of Captain America: Civil War, the Avengers must team up with the Guardians of the Galaxy to put a stop to Thanos (Josh Brolin), a mad titan hell bent on collecting all the Infinity Stones and bringing balance to the universe.

The Russo brothers were the ones handed the unenviable task of bringing together pretty much every single superhero introduced so far in the MCU and having them share the screen without the film becoming a complete mess. Having achieved such great things with Captain America: Civil War, there was nobody I’d rather have take on the challenge. Now with Avengers: Infinity War, they’ve managed to deliver a non-stop thrill ride that is well and truly worth the ten years of character and story building it took to get to this point.

Due to the balancing act of reintroducing characters and the film’s narrative, things do take a little amount of time to really get going however, it’s very much a necessity and it makes for such a worthwhile second act as our heroes team up to take on Thanos. Thor coming across the Guardians of the Galaxy and Doctor Strange trying to tame Tony Stark’s ego, both sets meeting for the first time, makes for an entertaining adventure and once again proves that these MCU films are at their best when these characters interactions are played out so well.

When it comes to the action side of things, driven by superior visual effects and such ferocious scale, Infinity War is one of the craziest films I’ve ever laid my eyes upon. The team-ups that play out in this film are exciting enough but then the moments that the Russo brothers deliver with them take them to the next level. It’s really expected in today’s cinema to see such grand visual effects, particularly in action sequences, but what really stunned me was how incredible Thanos looked, the detail in his features making him so much more of an intimidating figure. More on that guy later. 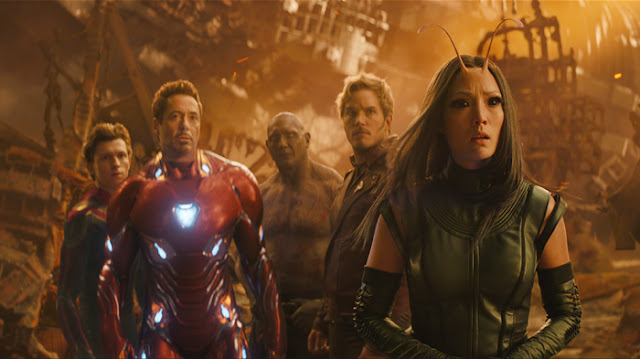 Infinity War features probably the most A-list cast of all time so you’d expect them all to get a major amount of screen time for this film to run smoothly. It’s shared as equally as possible, some getting a bit more to do than others, and it’s a tactic that pays off, both in terms of narrative and spectacle. Robert Downey Jr. has been synonymous with the role of Iron Man for the past ten years but it doesn’t stop him from giving it his all here, the combination of his assurance and naivety as Iron Man making for a dangerous cog in the Avengers wheel as they suit up to take on Thanos. I could go through all the performances but Downey Jr.’s is the one out of the heroes that stood out for me.

I mentioned how Thanos is brought to life through amazing visual effects earlier but none of it would be possible without Josh Brolin’s motion-capture performance in the role. Thanos takes no time in showing just how much trouble the Avengers are in, his physical presence obviously giving him a bit of an advantage however, Brolin’s voice work and facial expressions bring a whole new dimension to the character. Furthermore, Thanos is given plenty of screen time to delve into a bit of his backstory, adding an emotional weight and gravitas which in turn leads to him becoming one helluva villain, the best in the MCU by a mile.

Avengers: Infinity War is event cinema at its finest, the balance of comedy and drama works wonders, as do these characters forced together to fight the true evil threatening the universe. There’s plenty of crowd-pleasing moments as well as a fair share of crowd-shocking moments, the Russo brothers closing the film out rather brilliantly. Don’t forget though, there’s more to come when the Avengers return next year so, for now, it’s time to take a deep breath and think about what you’ve just witnessed.