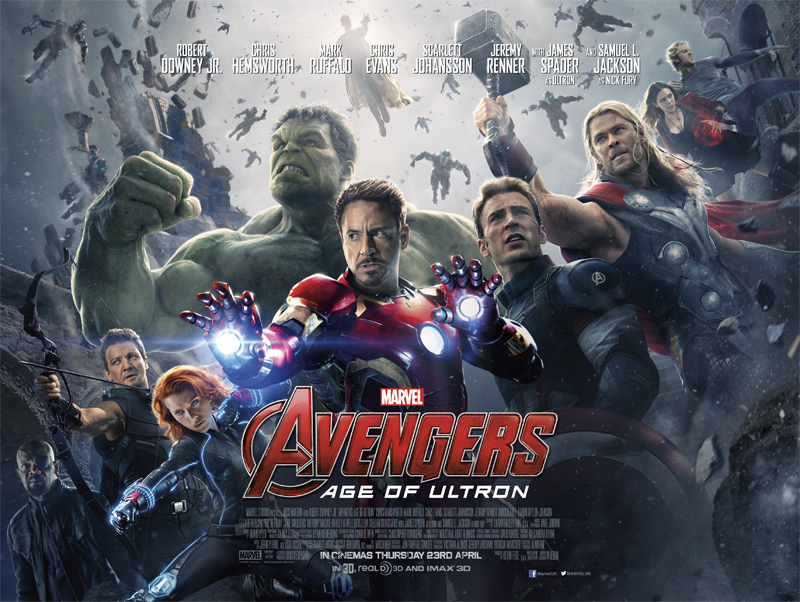 It’s been seven years now since Nick Fury appeared after the end credits of Iron Man to discuss the Avengers Initiative with Tony Stark. Seven years and ten films later, Marvel Studios has built up the Marvel Cinematic Universe to be one hell of a beast and with Avengers: Age of Ultron, they have their biggest film to date.

Age of Ultron isn’t particularly better than 2012’s Avengers Assemble but it is certainly bigger in almost every way. The stakes are raised and director Joss Whedon undeniably has an absolute blast bringing these characters to life, together on the big screen.

After retrieving Loki’s sceptre from a Hydra outpost, Tony Stark (Robert Downey Jr.) and Bruce Banner (Mark Ruffalo) discover an artificial intelligence within the sceptre that they use to jumpstart Stark’s ‘Ultron’ global defence program.

When Ultron (James Spader) wakes, he wakes with a mind set on destroying the Avengers and eradicating the human race from Earth. Not quite the peace keeping program Stark had in mind then.

With Ultron far more powerful than Stark could have imagined and with two enhanced humans; Pietro (Aaron Taylor-Johnson) and Wanda (Elizabeth Olsen) Maximoff, fighting with him, the Avengers must work together to put a stop to Ultron before he destroys the world.

The opening moments to a film like Age of Ultron are of the highest importance. I loved Avengers Assemble so was always a little worried in how a sequel would feel or work. All of those doubts were soon blown away by the opening sequence to Age of Ultron, which is both glorious and exhilarating.

It finds the Avengers infiltrating a Hydra outpost to retain the sceptre that caused so much chaos at the hands of Loki. Now a cohesive team, the Avengers sure make short work of getting the job done but it really sets the tone for the rest of the film. From this moment, the film runs at such a blistering pace, aided by eye-popping action sequences and a brilliant screenplay from Joss Whedon.

To follow Avengers Assemble is a daunting prospect for anybody but for Whedon it really is a challenge that sees him flourish. You don’t want to just repeat the same film again and Whedon has made sure that doesn’t happen. For starters, Age of Ultron is much darker in tone than anything in the MCU before, even with the inclusion of many light-hearted moments. Not all of the jokes do land but remember, this was never made to be a comedy.

At the centre of the film’s dark tone is Ultron, voiced brilliantly by James Spader. I’d heard a lot of things about Ultron’s history in the comics that had me excited and I have to say he is definitely one of the better villains that we have seen in the MCU so far. His twisted intentions combined with the Stark-esque personality make him a formidable opponent for the Avengers and certainly different to the threat they faced in Loki last time out.

Obviously, like the first film, due to the differing and large personalities within the group, there are going to be cracks that appear. Because of Marvel’s announced slate of films up until 2019, it made it much more interesting to see particular relationships come under strain and a few relationships, to my surprise, flourish.

The big pay-off comes though when the Avengers have to put their differences aside and unite as team. They do so brilliantly in some jaw-dropping sequences that both look and sound amazing on an IMAX screen. The opening sequence is just a taste of things to come and Whedon certainly pulls out all the stops to make this an unforgettable experience. The Hulk vs Iron Man fight is as epic as you imagine while the finale is just insanely fun to watch unravel on the big screen. Both have little moments and surprises that make them so memorable and Whedon makes sure each characters gets time to shine, something that could have been difficult considering the larger cast in this sequel.

When you have a cast of; Robert Downey Jr., Chris Evans, Chris Hemsworth, Mark Ruffalo, Scarlett Johansson, Jeremy Renner, Don Cheadle, Anthony Mackie, Aaron Taylor-Johnson, Elizabeth Olsen and Samuel L. Jackson, you know you are going to get quality. When they get to work from a Whedon script, it becomes a whole new level of quality.

Age of Ultron is a breathtaking slice of summer blockbuster action that signifies a change of direction in the MCU. The final moments of the film are just a perfect tease for the audience and with Captain America: Civil War due next year, it will certainly be interesting to see how that goes down and who will be returning for Avengers: Infinity War Part 1&2 in the future. Superhero movies are not going anywhere anytime soon and they will only be getting bigger and better. Count me excited.