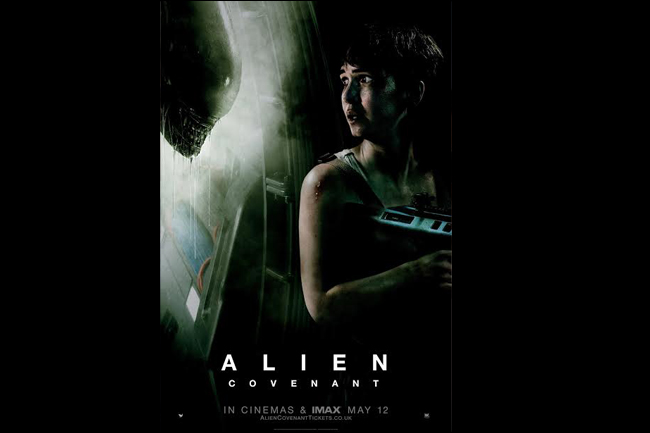 Remember before Prometheus was released back in 2012, when Ridley Scott was adamant that his then latest film was not going to have anything to do with the Alien film franchise? It was one of the most baffling denials to all as it was clear as day that it would tie in, we just didn’t know how. It turned out that Prometheus posed more questions than it was able to answer and with Alien: Covenant, Scott has certainly not tried to hide the fact that he’s going back to work on the franchise he helped lift off back in 1979.

The Covenant, a colony ship carrying both crew and around two-thousand colonists on board, intercepts a mysterious transmission after a shockwave damages the ship. The crew learn the location of the transmission’s source and decide to investigate the planet to see whether it would fit the profile for their colonial mission.

Upon exploring what they see as an unchartered paradise, the crew soon find themselves up against a threat beyond their imagination, leading to a harrowing escape to make it back to the Covenant alive.

One of the main tasks Ridley Scott had with making Alien: Covenant was trying to make a film that wasn’t just a carbon copy of what had come before it. Scott does this by blending the ideas raised in Prometheus with the horror elements of his original Alien to create a bold new chapter that certainly raises more questions but leaves the door open rather intriguingly for at least another film in the franchise.

Scott shocked us all with the chestburster scene in Alien and he finds a way to crank up the gore in Alien: Covenant, with some inventive new ways of the aliens exiting their respective hosts not for the faint hearted. He was never going to be able to create as atmospheric a film as Alien, the single location of that film playing a major part, but Scott shows some of his old form when creating a tense sequence, the initial facehugger attack being one of the most intense moments of the franchise, even though we know exactly what is coming.

The film is slightly lacking in the character department when it comes to development, with only a few of them becoming more than just expendable alien food. With a large crew and a new alien running amok, I have to say it was rather enjoyable watching how each of them would meet their grisly end. It feels as if the characters take a bit of a back seat to the creation vs evolution ideas that the film raises which, while it may alienate some audience members, drew me right in. The lack of practical effects was a bit disappointing as there were certainly moments where they could have used them but instead they opted for CGI, which makes the creatures far less fearsome.

Coming to the performances, Alien: Covenant does only possess one stand-out performer in Michael Fassbender, who plays both androids David, who we first met in Prometheus, and Walter, a member of the Covenant crew. Fassbender made David the most watchable character in Prometheus and he easily repeats the trick here with a dual performance that conflict one another, his line delivery as David in Alien: Covenant in particular is just so ice cold that he becomes quite a chilling character.

Katherine Waterston, Billy Crudup and Danny McBride are just about the only remaining cast members who get a chance to show any character and they do so very well, McBride going on to surprise a number of people, including me, with such a straight performance as the pilot Tennessee. Look out for the easiest money James Franco will ever make as an actor with a very brief appearance early on in the film.

While it is still a long way off the quality of both Alien and Aliens, I found Alien: Covenant to be a very welcome entry into the franchise. There’s horror, action and plenty of gore for entertainment value while the continuance of the ideas raised in Prometheus means there is more to this film than people just running and hiding from an alien, the closing scene leaving me excited for where Ridley Scott can take the franchise next.