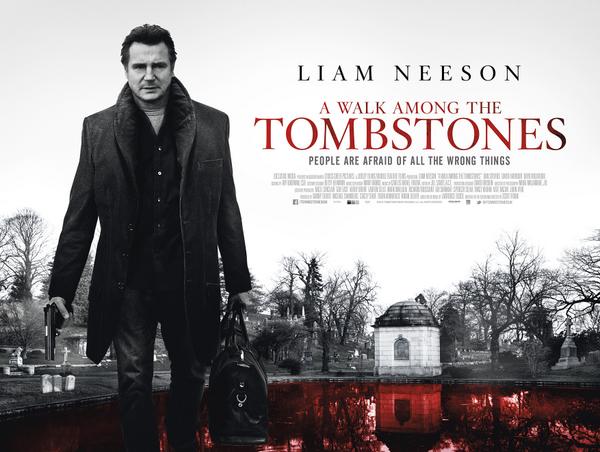 How do you solve a problem like Liam Neeson? The answer is you put on a gravelly voice and threaten your enemy down the phone.

Yes Liam Neeson is back and this time he stars in A Walk Among the Tombstones, an adaptation of Lawrence Block’s novel of the same name. Neeson plays Matthew Scudder, a private investigator hired by drug kingpin Kenny Kristo (Dan Stevens) to find the men who kidnapped and murdered his wife.

Back in 2008, with Taken, a trend started that saw Liam Neeson star in action films on a yearly basis, with many of these films being very similar. A Walk Among the Tombstones is the most different of these films, being more of a crime thriller, yet it all feels so familiar.

A Walk Among the Tombstones is not Neeson’s finest hour but it is nowhere near his worst. The trouble is that these roles are so common for Neeson nowadays that he can just sleepwalk his way through them. When that’s the case, more often than not, it doesn’t make for a very entertaining film.

This is a much darker film than the usual Neeson stars in as well which made the whole film more intriguing to me. It’s not just an all out action film like Taken. There is an actual attempt to build up some tension and suspense in this film.

The darker tone of this film made it all the more confusing when they tried to have some light comic relief between Neeson and Brian Bradley’s TJ, a boy who wants to follow in Scudder’s footsteps.

It felt horribly out of place at times.

All in all there is enough to A Walk Among the Tombstones to keep its audience interested however it is just a walk, don’t expect things to move along at a quick pace.