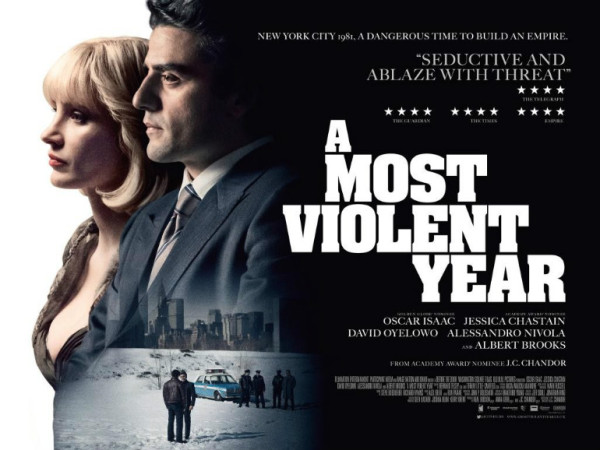 A Most Violent Year is a stylish crime drama written and directed by J.C. Chandor that stars Oscar Isaac and Jessica Chastain as the husband and wife duo who must look to protect both their business and family.

The year is 1981 and statistically it is one of the most dangerous years in the history of New York City. Abel Morales (Oscar Isaac) and his wife Anna (Jessica Chastain) are trying to settle their family into life in the city as well as expanding their business into an empire.

What they soon find out is that with the violence, corruption and decay present in the city, building an empire is not the easiest thing to do. When trying to be top dog, there will always be others trying to take you down.

Isaac’s intense and passionate performance is his best to date and really makes me look forward to more of his work. He possesses a silent rage that builds throughout, much like Al Pacino’s Michael Corleone in The Godfather.

That is not to say that Chastain stands in Isaac’s shadow throughout the film. Chastain holds her own in a male dominated film, giving Anna the steeliness needed to live the life they choose to live. A Most Violent Year also boasts an impressive supporting cast with Alessandro Nivola, David Oyelowo and Albert Brooks all starring.

This is director J.C. Chandor’s third film following Margin Call and All Is Lost and with both of those receiving critical acclaim, I am sure the trend will continue here. Chandor has written and directed all three of his films and A Most Violent Year may be his most accomplished yet.

The story, while at times being a bit of a slow burner, is paced perfectly and there was not one moment where I was checking to see how long was left. Mix that together with the well written characters and some stylish cinematography from Bradford Young and A Most Violent Year draws you in from its very first moments.

While it never reaches the heights of the two, A Most Violent Year feels like a hybrid of The Godfather and Goodfellas. With two fine lead performances and a director full of creative talent at the helm, A Most Violent Year is further proof that January has been a fantastic month for film.