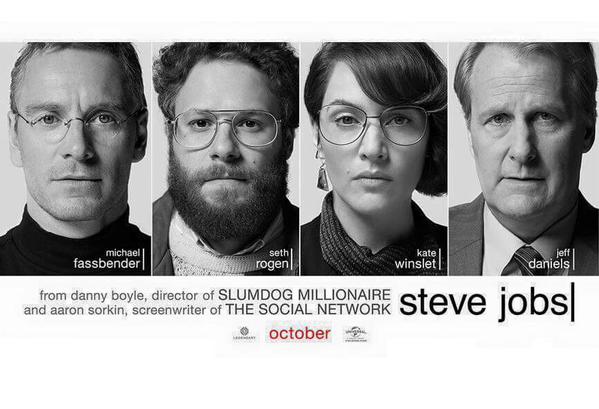 A film about Steve Jobs may not be to everyone’s taste but before you judge a book by its cover, I will let you know that there is no Ashton Kutcher in sight. A film about Steve Jobs directed by Danny Boyle, written by Aaron Sorkin and with a fantastic lead performance from Michael Fassbender however, and you have an irresistible film on your hands.

Set backstage across three separate and iconic product launches; the Apple Macintosh in 1984, the NeXT Computer in 1988 and the iMac launch in 1998, Steve Jobs is a compelling look at the man so hell bent on bringing the digital revolution.

Jobs (Michael Fassbender) certainly had his flaws and while preparing for these product launches, various stumbling blocks begin to appear, whether they be technical difficulties or personal issues with friends and family choosing to surface at the worst times.

His likeness to Jobs has been questioned but there is no doubt that Michael Fassbender revels in the lead role of Danny Boyle’s biopic. In fact, Fassbender has never been better, perfectly capturing the essence of the man so hooked on bringing humanity into the digital age that he nearly lost his own humanity in the process.

You sense a change in Jobs’ personality over the three product launches and Fassbender does a great job in portraying this. I’m sure we will be seeing him get a lot of nominations come awards season.

Fassbender is joined by a supporting cast who are sure as hell firing off all cylinders too. Kate Winslet is the stand-out as Joanna Hoffman, Jobs’ closest colleague, providing our protagonist with the human touch that stops him from becoming an android 24/7. Jeff Daniels, Seth Rogen and Michael Stuhlbarg all play their part in making Steve Jobs such an enjoyable watch too.

The standard of the film is undoubtedly raised by the impressive screenplay from Aaron Sorkin. Sorkin writes like no other screenwriter and his Steve Jobs screenplay is easily one of the best of the year. Combine his words with the performances and it really is a verbal onslaught that you do not want to miss.

Danny Boyle’s film is given a further injection of energy thanks to some sharp editing and a subtle soundtrack to accompany the manic preparation Jobs faced before the launch of the three products.

Steve Jobs is a film that has unfortunately not done so well in America, with Universal pulling the film from 2000 cinemas, but it is one of the essential films you should watch this year. It’s not as good as The Social Network but I reckon it faces the same problem with people not interested in seeing a film about its subject. I am glad to say though that, like The Social Network, it’s a much better film than I first thought it ever could be.