In my review of Door Kickers I stated that the development team appeared thoroughly dedicated to the game, through additional campaigns and a strong post-release patching trend they showed that Door Kickers was something of importance to them. This has continued thankfully with the release of the game on iOS and Android. I believe the iOS version is iPad only, so, I mean that’s a thing. I won’t really cover iOS, it’s probably nice to have such a good game on the platform but I have little knowledge or interest in iOS. Android on the other hand, I have a great deal of interest in and have been trying the game out as much as possible. For reference the game is stated as being designed around tablet and phablet sizes, which is fair as on my Nexus 4 the interface is perhaps a little too small for comfort. My primary testbed for this update has been the LG Gpad 8.3 running a CM12.1 nightly. This device is a good size for testing as it sits quite neatly in the middle of the current tablet size trend. There have been some issues with device sizes, addressed mostly in the Google Play Store comments however the developers have been quick to address people’s concerns and are searching for a solution. Personally I’d rather they left it open and allowed installation across all devices, but have a clearly stated recommended screen size, in short I would like to run it on my Nexus 4 if I really want to (and be it on my head if it’s a little fiddly). 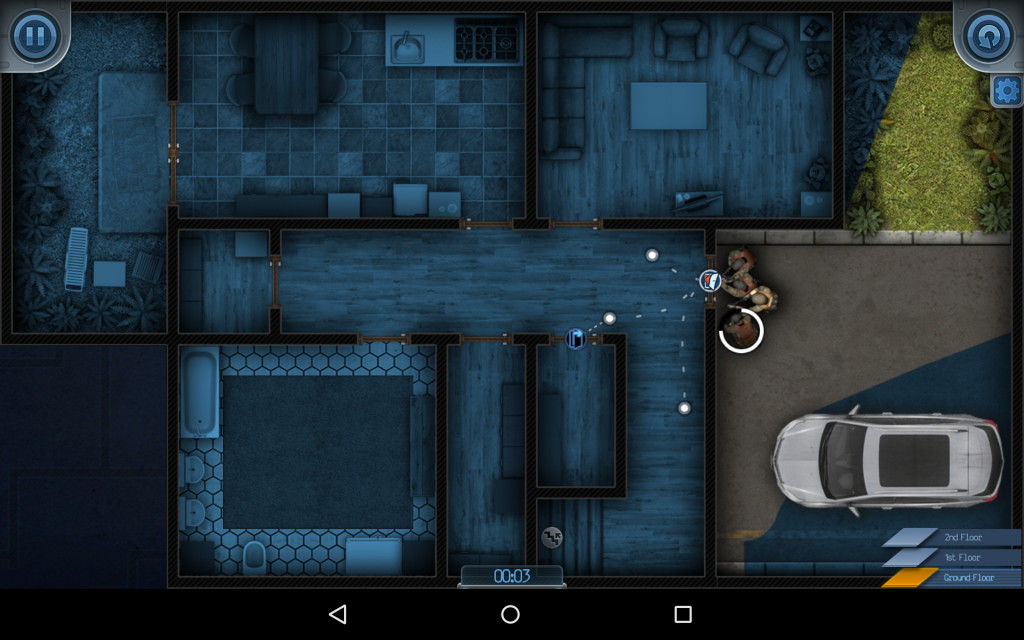 The core gameplay remains much the same as on desktop platforms, the same pausable real-time gritty tactical play remains intact. In fact across the board the porting has seen little lost between versions, which is very impressive. The controls are a key thing here, however the nature of “drawing” the paths of troopers was already well placed for easy touch screen adaptation. Much of the rest of the interface has transferred across well, although in some cases the occasional button or two may be a tad fiddly, but not in any significantly detrimental way. This is a very good port of a very good game and I could not be happier. Something else worthy of mention is the possibility of save game synchronization. My immediate concern when loading up the game on my tablet was: “Wait, but my progress!” A brief exploration of the settings revealed a nifty import-export system for save games that worked across platforms and requires little more than a code entry! I’m very happy with this as it really does mean the same game everywhere, and not a stunted mobile port that relies on micro-transactions or some rubbish. The mobile version of Door Kickers is the real deal, full in everything but mods and the mission editor, and that is absolutely fantastic; even without the mods there’s more than enough content here with all of the single missions, the campaigns and the random mission generator present.

Performance has been perfect in both Nexus 4 and LG Gpad 8.3 tests, although to be fair they have almost identical specifications so they don’t represent much of a hardware variety in terms of testing. There is a low quality mode, which means that the game will likely run on even weaker hardware. What’s more KillHouse Games seem to be actively monitoring the reviews section of the game in the Google Play Store and are responding to comments and review with advice or debug requests. Despite only launching relatively recently there have been fixes implemented, which is a quick turnaround on patching, especially considering that they are likely patching the iOS version simultaneously. Currently Breach & Clear is the main alternative on Android and if I were pushed to discuss how the game now stacks up against the likes of Breach & Clear, I would say that Door Kickers is a superior experience. I did enjoy Breach & Clear, don’t get me wrong, but the different development paths become very clear. Breach & Clear moved from mobile to PC, with all of the caveats that come with that, making the two versions significantly different and the PC version far superior. Door Kickers however went the opposite route and it shows, there are none of the hangovers of microtransactions and little of the content is gated unfairly. I like and enjoy both games, but my go-to of the genre on both PC and mobile is Door Kickers. It also helps that Door Kickers feels like it’s a little easier on the tablet hardware and therefore less likely to drain the battery as significantly as the more 3D and graphically intensive Breach & Clear. There is space in the market for both of these games, and possibly more, and I desperately desire a new SWAT 4-like game with this level of tactical depth and first person gameplay. For the moment however I will continue to while away my train journeys hopeless attempting to beat certain kill house levels with a minimum of fuss. (I may just resort to an explosives happy approach yet, I’m not sure.) 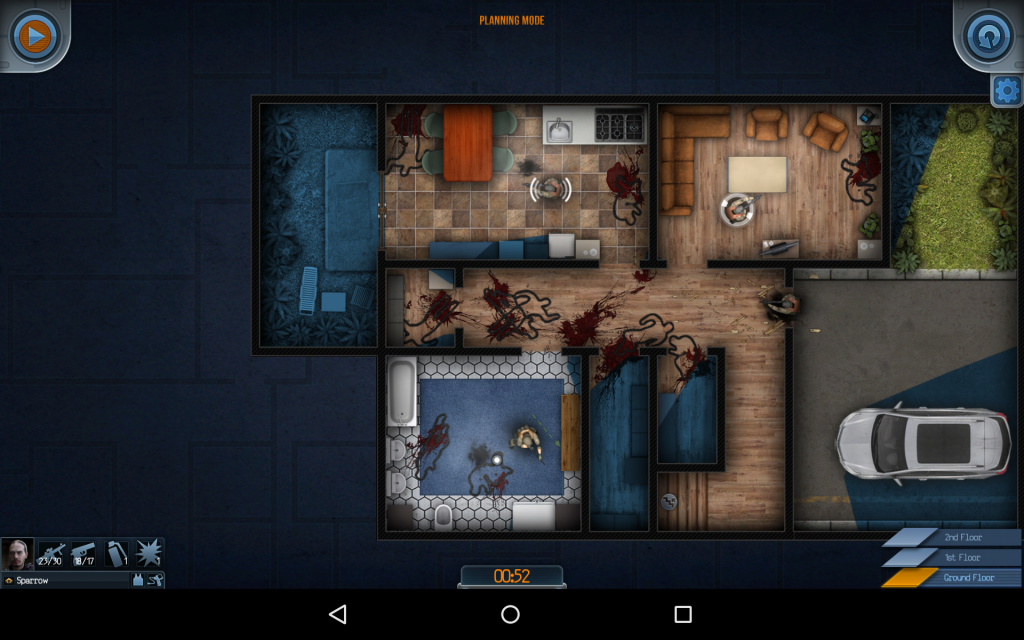 Door Kickers is available on the Google Play Store for £3.99 (approx $6.15) which is an absolute steal for what you get, also worth considering is the PC version which is still £13.00 (approx $20.00) from the website, providing a Steam key and a DRM free download, but it’s also available from Steam direct, the Humble Store, and GoG. RPS had this down as their best tactics game of 2014, and that was a very well deserved award and it’s fantastic to have that experience so well implemented on Android and iOS. I can’t recommend Door Kickers highly enough for anyone with interest in tactics-centric games.