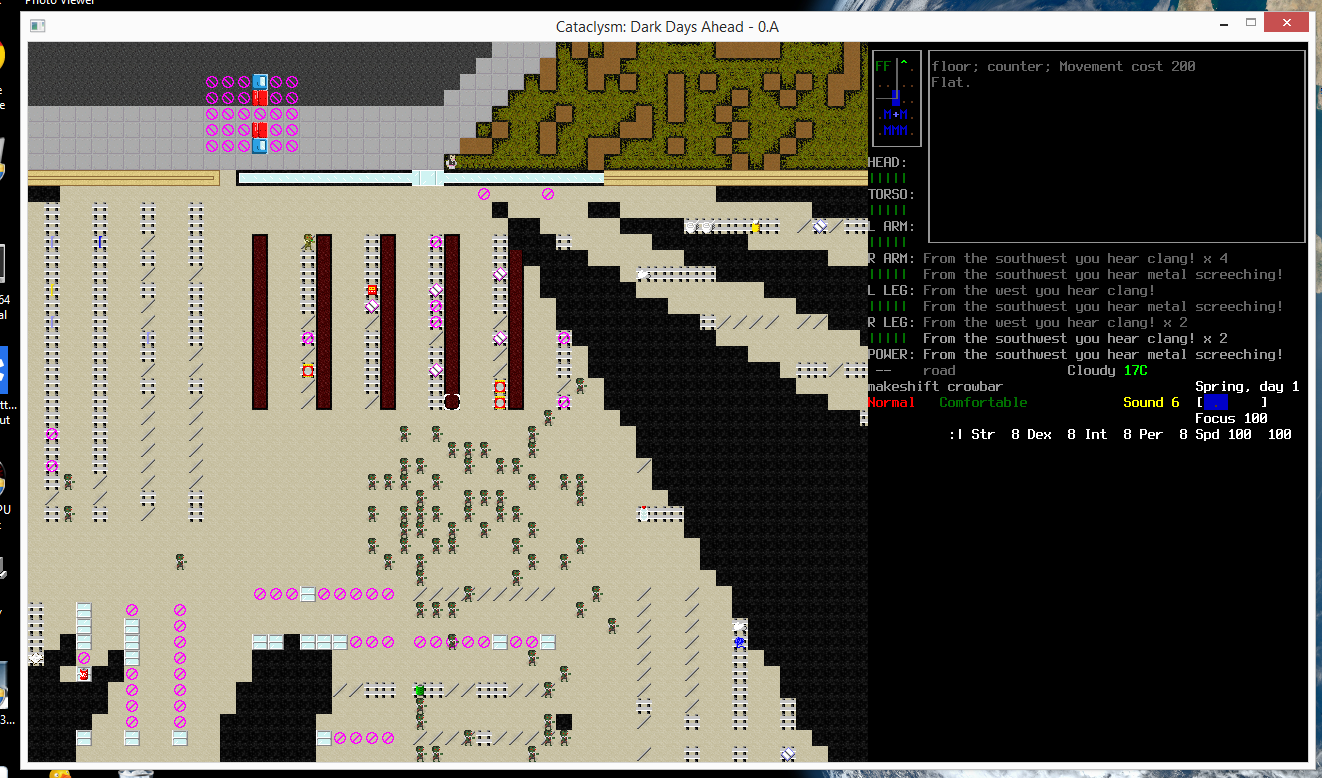 It’s been just under a year since I last looked at Cataclysm and we left it at the very beginning of a crowd funding campaign to hire a full time developer. That crowd funding campaign succeeded raising $9,500 of the $7,000 goal and ultimately providing the project with the funds they needed to bring in a full time developer for a short time. I’ve commented on my support for crowd funding many times prior however the Cataclysm model is slightly different as the game is already free and open source. What we have with this campaign then is perhaps an insight into the potential for such a funding model for FOSS games and projects. The changes that were teased in the Kickstarter are beginning to really take form and progress, whilst not lightning fast has been reliably constant with major changes certainly showing fruition.

The gameplay and combat has not seen a major overhaul however there has been a significant slew of new content and tools. World generation has been tweaked to allow… well, tweaking. This means that when creating a new world the player can have it to their liking, whether that been huge cities of mutants or a savagely wild countryside filled with animals, mutants and worse. Character creation has seen a great deal of work with a massive increase in the amount of professions, skills and traits available when spending the character points. The different professions bring their own specific item sets and skills. For example the security guard will start with a firearm and reasonable gear but no special skills whereas a computer hacker will start with limited gear but a huge advantage in the computer skill. With the character skills and traits system already burgeoning these additional professions give more choice yet also allow the player to create a focussed and believable character build. In addition to the increased content and world generation tweaking there is now a mod manager that allows the player to select which mods they want at any particular time.

The game is still hard as nails, it really is rather brutal. Coming back into it to check it out recently my attempts often ended far short of the first night, eventually improving to spending the first night in an infection-fuelled fever state which eventually killed the character the next day. That particular character build was a martial arts expert and whilst that worked well for dispatching of zombies it was also a build prone to getting bitten and therefore infected. I fear that I may need to take a less aggressive approach as it really is a purebreed roguelike. I have had a chance to explore the realm of ranged combat though. In one case I managed to find a lightweight single-use rocket launcher (LAW) and decided to experiment with it to see if I could bust into the back of a walled science compound with it in order to avoid the turret and door lock. I was hugely surprised when it actually worked, the rocket blew apart the wall into rubble and I could just climb through the hole.

One of the most significant changes aesthetically is the implementation of tilesets. This means that no longer is it necessary to play the game in ASCII, but instead through SDL it is now possible to have a graphical tileset. Currently the download comes with four tileset options each with their own style and character, in addition there is still the option of having plain ASCII if you want it. This is a big change and I’d imagine that it improves the game’s appeal for many as it’s quite possible to bounce off ASCII quite hard. Personally I’m very happy to play with ASCII however the option of playing with not only one, but a few different graphical tilesets is very nice to have. The wiki also includes information for those looking to modify or create a tileset of their own, allowing them to create the Cataclysm that they want to play.

Compatibility-wise; the game will run on almost anything. With the implementation of SDL I have found the game as playable on Windows as it is on Linux, meaning that your experience is going to be much the same whatever platform you play on. This game was included in the Single-slot Travel Toaster section of my recent Toaster Tally articles and it is well worthy of that spot. The game is not particularly taxing yet it includes depth of simulation and gameplay that is difficult to match in the realm of post-apocalyptic games, whilst also being on par with the great roguelikes. Cataclysm is quickly becoming a go to game for me and it also represents a great deal that I like: It has proven that open source game development can produce some really impressive and fun results, it has proven that crowd funding and open source development can be a good combination and it’s proven that ASCII roguelikes should never be under-estimated. Grab Cataclysm from the website and have a go yourself, go on it’s free. If you need some help surviving in this admittedly touch game then I’d recommend checking out the wiki, especially the “How to survive the first night” page. If you really like what you’re seeing then maybe consider throwing a few bucks towards continued development.

How to Survive Your First Day: