It hasn’t actually been that long since I last looked at RimWorld however the time since has seen some updates which change and improve the game, to the extent that I’d say it was the game I played over the Christmas break, with the exception of some Divinity: Original Sin co-op. (Which I’ll write about soon hopefully). Apart from general smoothing out of bugs and problems the developer Tynan Sylvester has given the game biomes and temperature modelling which extend the potential challenge and importantly, the potential for storytelling. I mostly aim to do exactly that in this update in providing a narrative of the development of the colony I played over the holidays and hopefully weaving details of updates and additions into that narrative.

My colony of Corsair (because my Corsair M65 mouse was the first thing I saw when naming) started out with just a few fairly well rolled characters, each without any major flaw. The biome that I chose would give me a different experience to my prior attempts at the game and give me a good idea of how the new temperature modelling works out. It has a climate that I’d describe as Canadian with relatively warm summers but also cold and long winters. The summer temperatures managed to peak at 21℃ and winter temperatures generally hit -21℃ with cold spells occasionally knocking it down to -30℃. (I’m not converting those into fahrenheit, welcome to the 21st century). The first spring and summer were relatively easy and gave a great deal of leeway in building up a large supply of frozen food in order to stave off the risk ofstarvation over winter. Rather than build a building anew I repurposed an existing almost intact ruin for the purposes of a general purpose kitchen, workshop and bunk house. This building would retain much of that use throughout the life of the colony as there was little need to move the workshop or kitchen elements too far. The beds that made up the bunkhouse were repurposed into hospital beds as a separate living building was constructed. The temperatures during this first summer were favourable for living, meaning that despite building heaters they used little power. The warmth did present an issue for the storing of raw and cooked foodstuffs, so a new addition to the game was necessary; the refrigeration unit. This unit pumps the heat out of an enclosed space and into the space behind it, be this open air or another room. Therefore it was possible to have the food chilled to prolong life or for a little extra power, completely frozen. Although I’m not proud of it one of these little machines also got plumbed into the sides of prisoner cells. You see some prisoners are fairly useless and are good for little other than organs and killing, however harvesting organs and killing will cause a negative mood modifier for your colonists, as does clearing up rotting bodies. So merely place an unwanted captive in their cell, reduce the temperature to a cool -60℃ and let hypothermia do its job, followed by a cleanly preserved and frozen corpse. I could, if I had needed to kept that corpse and butchered it, but again that’s a negative mood modifier. It’s grim yes, but sometimes survival requires that.

The colony managed to reach its first winter with relatively few problems, pirate raids caused quite a few injuries and problems which is again part of the real story-building aspect of the game. As harsh as I may have been to prisoners or assaulting enemies it is only fair considering what they gave to my poor colonists. Take Mac for example: an original colonist and a valuable member of the colony, in the past 5 in game years he has two bionic leg replacements, two bionic arm replacements, a bionic left eye and both ears shot off. Then we have Dizzy, a later arrival with a replacement right arm and leg and his nose “bitten off”. Or perhaps the story of poor old Hayhouse, and absolute champion colonist until a chance M16 shot to the head. He survived but the brain damage rendered him significantly slower and less efficient than everyone else. I still can’t bring myself to sacrifice him, so he lives a fairly relaxed semi-retirement. Every colonist there has a story to tell, both in their backstory and most importantly in what they’ve done and seen since arriving at Corsair. Combine this withat least two malaria outbreaks and a couple of flu outbreaks as well and that colony has quite the history now. The first malaria outbreak was itself a very hairy situation with over half of the colony ill and the medicine supplies dwindling, but they pulled through. The colony eventually expanded, requiring more food and power. Food production was pulled indoors using the hydroponics available, allowing full time growing of food and also medical plants. The additional power requirements for this were provided with a diversification of power production to protect against circumstance. Geothermal, wind and solar were also utilised to power the production facilities required to keep the 20 or so colonists fed in the final state. I won’t spoil too much of the late game but needless to say that this colony reached the spaceship phase and escaped, which was necessary as attacks ramp up in severity over time and the construction of that base was crumbling under the onslaught. 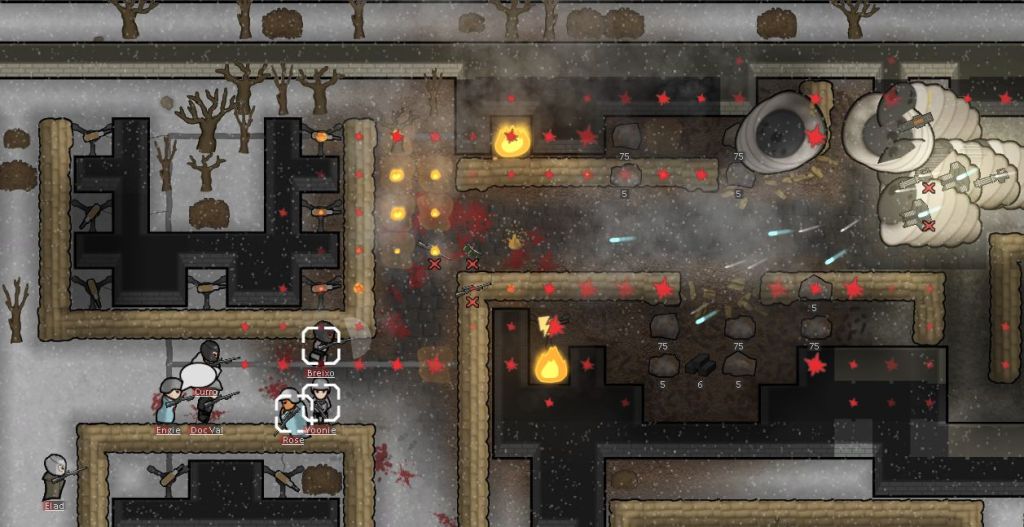 In short the colony of Corsair played out over maybe 5 years in-game and possibly over 20-30 hours real world time. In that time a huge amount happened, far more than I’ve summarised here but I hope that this gives yet more of an impression as to the nature of RimWorld and why it’s so good, even at this stage. The colony that played out above could have been far different too, I could have chosen a colder biome and struggled with food, a jungle biome with a wood and food-based economy or a desert biome for some real challenge. In addition to the base game there is an active modding community producing more detailed systems, items and interface changes further extending the game. If one thing has proven entirely consistent it is that games with a strong modding base and community have the potential to be infinitely big, just look at Minecraft and Skyrim.

As I’ve said before availability is very good for RimWorld with simultaneous Windows, Mac and Linux updates. The system requirements are equally accessible with the CPU recommendation being a fast Core 2 Duo or a Core i3 with a GPU requirement of Intel HD3000 minimum. The base game package including Early Access is $30.00 (approx £17.50) available from the RimWorld website. The updates from Tynan are continuing to appear at a steady pace, in addition to the thriving mod community.