It’s been almost exactly a year since I last looked at Cataclysm: Dark Days Ahead (Cataclysm for shorthand) and there’s been a few changes. I’ll quickly reiterate exactly what Cataclysm is: It’s an open source ASCII post-apocalypse roguelike with an enormous amount of depth. Now once again I’m insisting: give the ASCII a shot, and if it’s not for you then have a look at the SDL release that allows tilesets. This is something that’s come a long way since the older releases and I’d say that the game is more accessible than ever thanks to the ever great integration of the likes of tiles and such. Previously I’ve mentioned and applauded graphical tilesets being in the game, but back then they were not in the same state of completion as they currently stand and really ASCII was almost a necessary fallback. Now though, the tilesets have quite amazing features and transform the game experience for those that might not like the idea of playing ASCII. 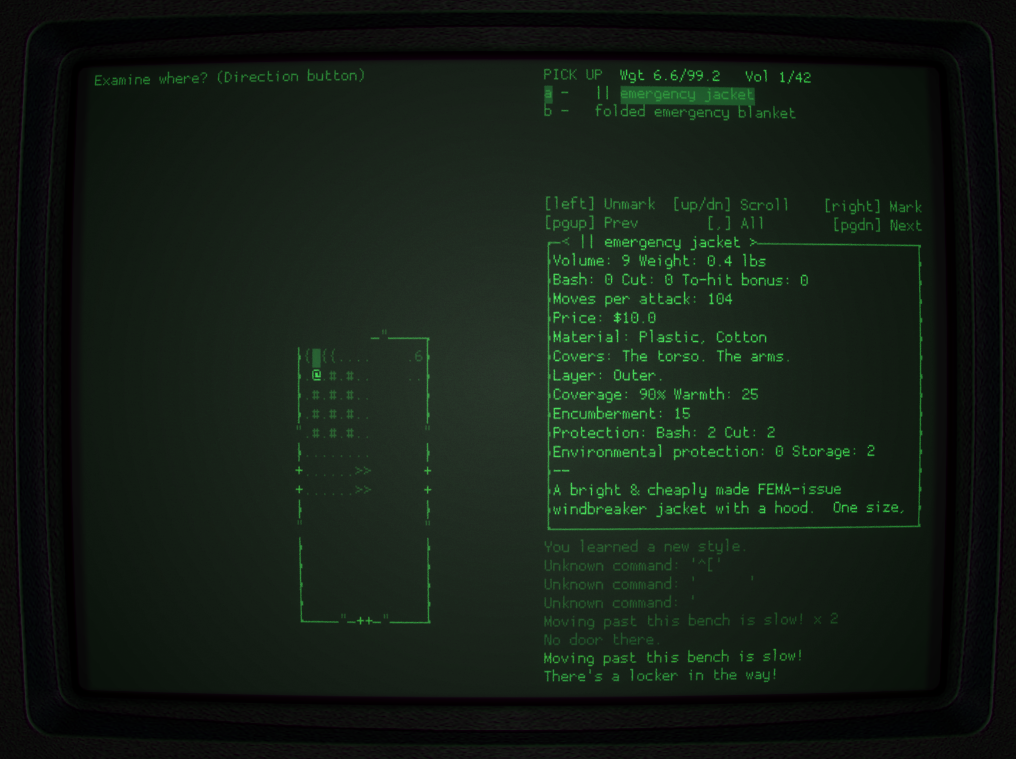 With much of the engine in a solid state it would seem that efforts are being concentrated on the addition of further content to the game, which is perfectly fine. As it is the game has a significant amount of content with a huge variety of items, weapons, monsters and a huge world to explore. This is possibly where the true value of this form of engine shines through as the addition of new items and monsters doesn’t require hours of tedious modelling, texturing, animating and then adding to a database. Instead new content skips those really time consuming tasks and become merely an object consisting of text and stats. This, I’d imagine, vastly shortens the time it takes to add new content and as a result the world is far more varied and full. The changelogs from the last two updates both offer a large number of content updates and whilst I haven’t managed to survive long enough to enjoy all of this content personally, it’s there! Aside: You ask, if you’ve been playing this game for so long then how come you’ve not survived long? My response would be that I tend to dip in and out of the game sporadically, and the game is hard, very hard.

There have been some improvements to player-facing systems, for example since I last played there have been improvements in many of the menu systems. Something that I noticed very quickly was the number of optional user-made mods that the game ships with now, allowing you to very easily customise your experience to be exactly what you want it to be. Improvements to menus are a welcome improvement as up until the muscle memory starts to kick in ASCII games can be a little complex to operate, and I will admit that on playing the latest release the whole experience felt a great deal smoother. This is still a “wiki open for reference” game for beginners, but the experience is certainly getting easier allowing the player to fight the elements and the world and monsters rather than the interface. 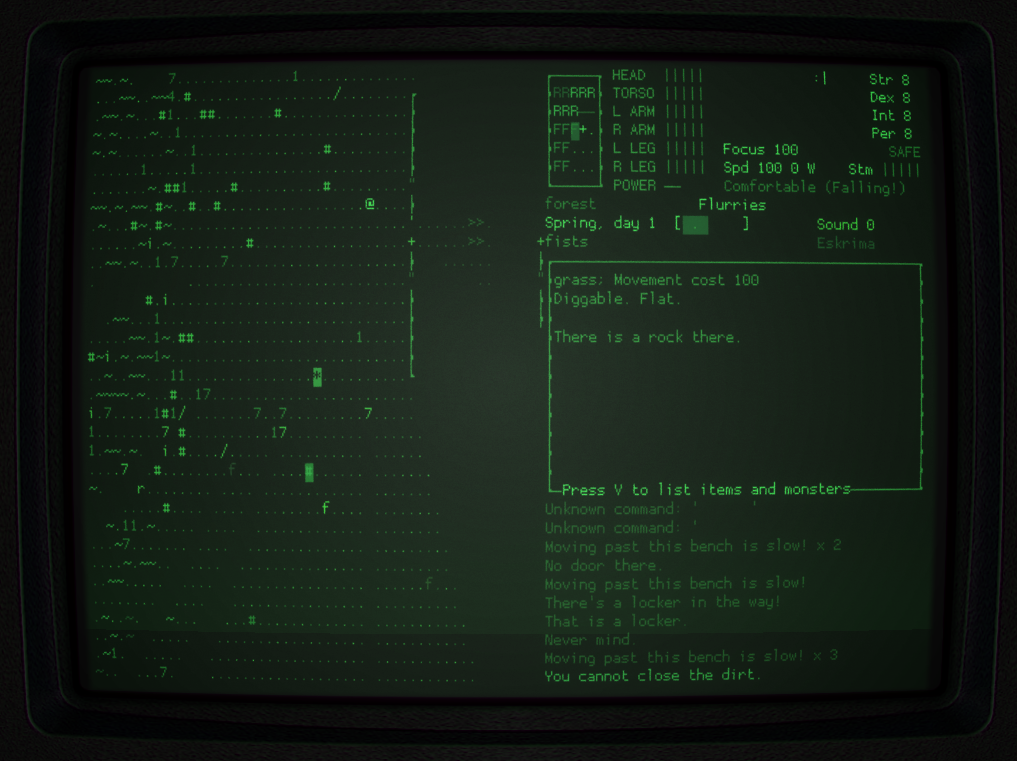 Really the game has come a long way in the past few years that I’ve been following it. They had a successful crowdfunding campaign that allowed a developer to make very rapid progress on the game in a short amount of time, implementing complex changes to the underlying systems. Since then the development appears to have continued at a steady pace with the game improving significantly with every release. The experience within the game is almost unlike any other at the moment, I would describe it as the Dwarf Fortress of modern-depiction roguelikes. The sheer complexity, scale and depth exist in a manner far beyond even the most developed of its competitors. Perhaps the closest would be Project Zomboid, although the relatively small maps and limited number of items and systems means that Cataclysm is just ahead. Looking at the design document for the game (linked below), it’s possible to see just how this is coming together and what the intended scope for the game truly is. The first few key points are fairly self explanatory however once we get to discussions on intensity, reality and survival and roguelike things get a little more interesting. In each of these cases the design document lays out what might be the ideal implementation for many of them, often eschewing popular and common design developments for more hardcore and interesting ideas. The survival sim element of the game, this could well be an entire game by itself, turning off monster spawns and setting a harder set of seasonal conditions could well turn this into a pure survival game thanks to the heavily developed systems in place. The entire document and the patches and updates that appear to be born of it display a development model with the playerbase sitting at the very heart, as one might expect from an open source project. The end result of this is a game that is built very specifically for its audience and probably shouldn’t be as accessible as it is, however thanks to many of the improvements to the interface and general playability I fully believe that it is capable of attracting a far greater audience. There is a danger in drawing a larger audience that the development model becomes skewed, however the project has good direction and I can’t see that being an issue (the design document is proof enough of that).

As before: compatibility-wise; the game will run on almost anything. I have found the game as playable on Windows as it is on Linux, meaning that your experience is going to be much the same whatever platform you play on. This game was included in the Single-slot Travel Toaster section of my recent Toaster Tally articles and it is well worthy of that spot. The game is not particularly taxing yet it includes depth of simulation and gameplay that is difficult to match in the realm of post-apocalyptic games, whilst also being on par with the great roguelikes. I also decided to combine Cataclysm with the Cool-Retro-Term project to give a real Fallout feel to the experience. (Link Below). There have also been performance improvements in every release over the year, so the game should be even more playable even in extreme situations. Grab Cataclysm from the website and have a go yourself, go on it’s free. If you need some help surviving in this admittedly touch game then I’d recommend checking out the wiki, especially the “How to survive the first night” page. If you really like what you’re seeing then maybe consider throwing a few bucks towards continued development.

How to Survive Your First Day: