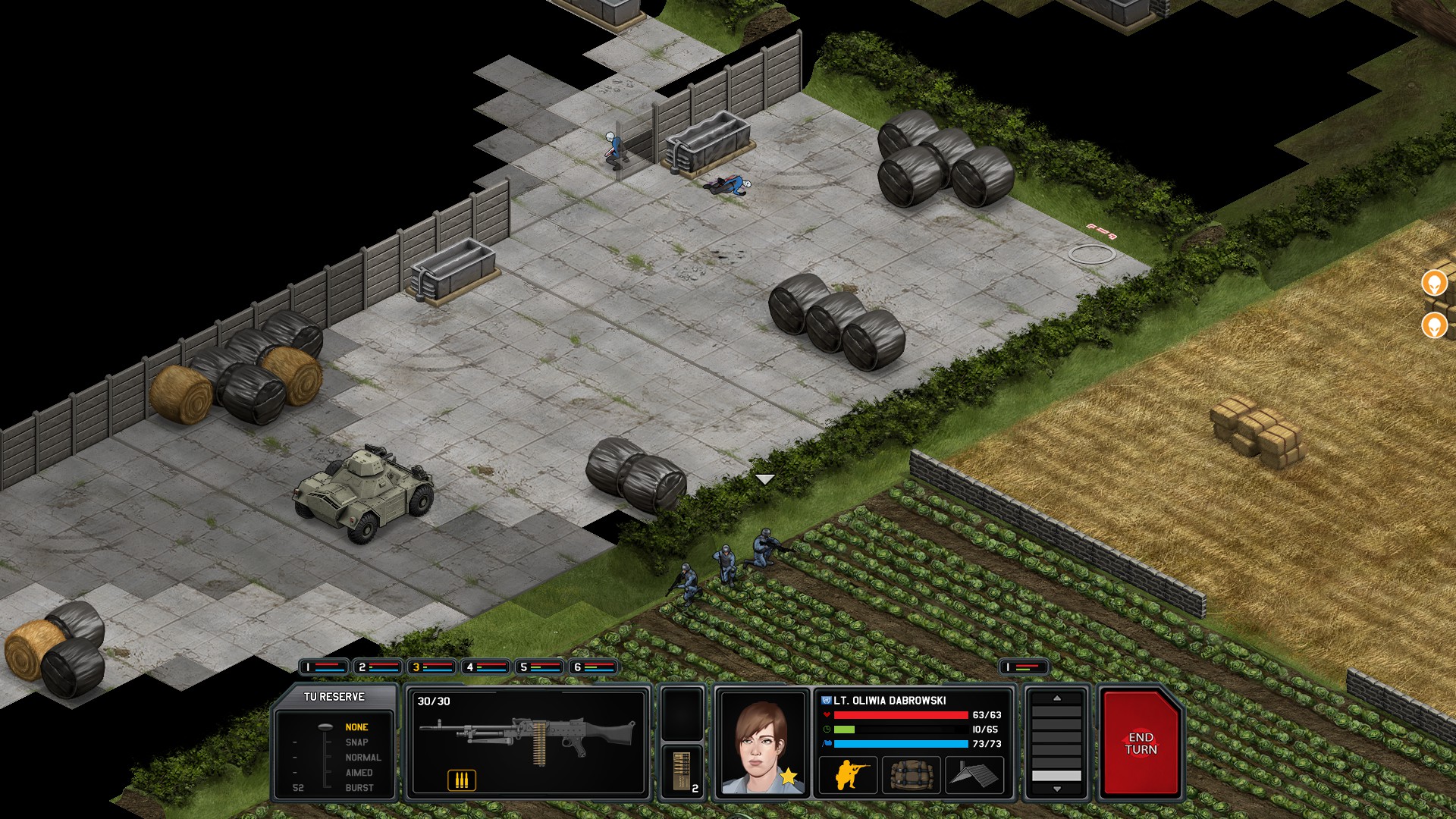 Xenonauts is essentially a re-imagining of the classic game UFO: Enemy Unknown. The premise of this game and its spiritual successor is of a strategic defense against an alien invasion using a combination of global strategy, air defense and squad based tactical encounters on the ground. UFO: Enemy Unknown has a huge cult following and a very very reverent place in the hearts of many gamers old enough to have played it in the mid ‘90s. I never did play it in the ‘90s, which remains a shame to this day as it probably would have been right up my street however the entire premise is very attractive to me even now. UFO: Enemy Unknown and the following X-Com series has another successor; the X-Com: Enemy Unknown release by Firaxis. This 2012 re-imagining of UFO: Enemy Unknown follows many of the original design tropes of its influence however there are a variety of changes to how the game plays. Xenonauts on the other hand is somewhat closer to the original UFO: Enemy Unknown in many ways and therefore could be preferable depending on what the player is looking for.

The primary game screen that most management will take place on is the geoscape, a map of the Earth from which UFO interactions can be monitored and managed. The range of vision is dependent upon radar which is deployed in your base(s). This means that initially when you only have a single base you  will only be able to cover a certain region of the globe until you accrue enough funding to expand globally and build new bases. The constituent parts of these bases then make up the rest of the management screens; showing a base management screen for expanding your base resources, a research screen detailing how far your scientists are with your assigned research, a workshop screen for managing equipment and vehicle construction, a barracks for hiring and managing troops, a storeroom for handling inventory, a soldier gear screen for altering fireteam loadouts, a vehicle screen for managing vehicles and finally an aircraft screen for managing your aircraft. It is worth noting that while the original UFO: Enemy Unknown was set in 1998, Xenonauts is set in 1979 during the height of the Cold War. This modifies the available weapons and vehicles and alters the feel of the game in general, which I’m fairly happy with as Operation Flashpoint cemented my appreciation of Cold War games long ago. Overall these strategic management elements for the game are very close to the UFO: Enemy Unknown, and with good reason as it provides as very strong foundation. There is little that is not intuitive and overall management of what is a very deep and detailed game is easy. Very rarely do I find myself fighting the interface more than the enemy, which is a good sign.

The second set of game screens that I shall discuss are the combat screens. First off the simpler air combat screen. This is a top-down radar-esque representation of the air engagement where you control the flight paths of your planes in accordance to the flight path of the enemy UFO. Overall this air combat system is a vast improvement over previous implementations in the likes of UFO: Enemy Unknown and it is quick and simple enough not to be too much of a chore. If the air combat does at any point feel like a chore then there is an auto-resolve option which will decide the outcome of the engagement numerically leaving you free to do other things. The other combat screen which is really the bread and butter of the game is the squad-based tactical engagement system. In Xenonauts this takes the form of a 3D isometric map whereupon a landed/crashed UFO will be, along with its inhabitants. This combat really is quite something and is a great deal of fun. Managing a squad of Xenonauts, whom you have equipped, through the engagement with the alien threat is very satisfying. It is necessary to employ proper tactics to the situation; splitting the squad into fire teams and then having them move through the map providing arcs of fire as they shift from cover to cover. The aliens are somewhat brutal and body armour is not available initially and must be unlocked through research. Even with body armour unlocked I wouldn’t become too attached to your squad members. The combat in this mode operates in a turn-based fashion with each soldier (and alien and civilian for that matter) having a set number of Time Units allowing them to do so much during a turn. For example a machine gunner has a large unwieldy weapon which takes a lot of Time Units to use, leaving less for movement. So unless your machine gunner is moving a very short distance, there isn’t much chance of moving and firing on the same turn. All actions that are taken will use Time Units, including inventory management which is appropriately dynamic: Much like in Arma it is possible to grab weapons and inventory from fallen comrades, meaning that the demolition charge that Sgt. Jones had on him when he was gunned down can be grabbed by Lt. Schubert or Lt. Kramer and thrown into the nasty grouping of alien scum responsible. This is something of a gross oversimplification of the depth of the game and I have not yet even fully explored the tactical combat fully, not to mention the strategic screens hinted at earlier. If I were to fully explore the game then I would go vastly over a reasonable word count so my recommendation is that if what you’ve read here sounds like your cup of tea or you enjoyed the original UFO: Enemy Unknown then absolutely check out some Xenonauts Youtube videos. (I’ll link to the Scott Manley series which remains a fantastic example).

The aesthetic of the game is different to that of UFO: Enemy Unknown and the modern re-imagining XCom: Enemy Unknown. Whilst the original had a cartoony look and was limited by resolution and 3D limitations of the time and the reimagining went for a stylised cartoony appearance, Xenonauts uses a hand-drawn/painted illustrated appearance. This works well with the Cold War era and the general feel of the game much more so than a re-imagining of the UFO: Enemy Unknown style might have. The music and sound design is spot on and presents an audible accompaniment to the visual aesthetic, especially during those moments of hidden movement in the tactical combat.

Xenonauts is available on Windows, Mac and Linux although annoyingly the Steam version is Windows only. Something of note is that the Linux and Mac versions are not native and instead work through a Wine wrapper, although in my experience it performs fairly well. The system requirements are not very high at all, in fact this could well be a good candidate for a Toaster game. It ran pretty flawlessly on my Thinkpad X220 (even through the Wine wrapper) and that only has an Intel HD3000 iGPU. The CPU requirement is listed as 2GHz (no mention of dual or quad core) and the RAM requirement is 1GB, which as I said is not a system killing combination. The game can be purchased from Steam for £18.99 (~$31.50) although I’d recommend not getting this version due to the Windows only restriction, instead Desura also has the game for £14.99 (~$25.00) on all platforms and my solid recommendation would be buying the game through the Humble widget on the website which will net a Steam key as well as DRM-free downloads for all platforms at the price of £15.05 (~$24.99). If you do purchase the game then may I also recommend the Community Edition patch which has fixed a few bugs and issues with the game that the official developer version has not yet, I will provide a link below.

In short, Xenonauts is a great game in its own right and is most certainly a brilliant successor to UFO: Enemy Unknown. It is not necessarily any better or worse than XCom: Enemy Unknown as they are attempting very different things and really the one you prefer will depend on what you’re looking for.