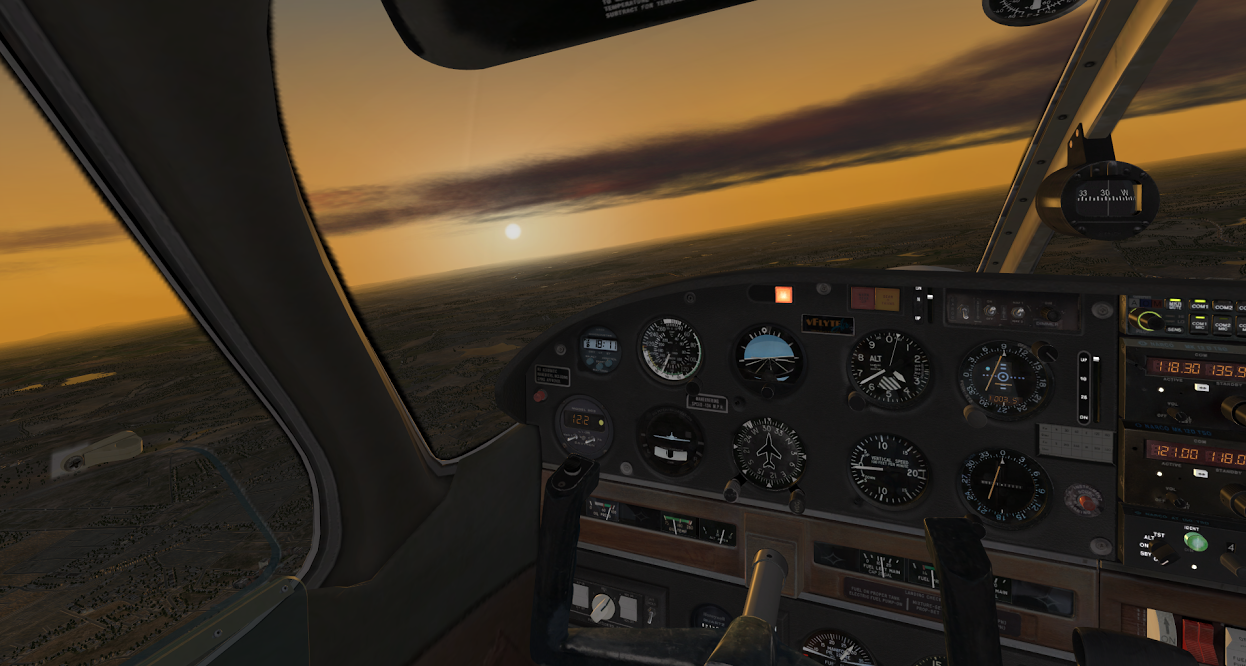 X-Plane 10 is pretty immense and it will be a different beast depending on what you’re looking for, so I’ll try to cover what I can in a reasonable space. This is the tenth iteration in the X-Plane flight simulator series. For the longest time the amateur flight simulator market was dominated by Microsoft’s Flight Simulator series, with the occasional smaller scale game like Flight Unlimited popping up. I played a huge amount of the Microsoft Flight Simulator series, from 98 through to 2004 although I never did get Microsoft Flight Simulator X. The whole time though X-Plane has been developing under a relative quiet however recently the simulator has released on Steam, replacing the somewhat pesky disk-based DRM validation with a more reasonable digital system built into Steam. For me personally this was the biggest shift in terms of wanting to play the game as my enjoyment of X-Plane 9 was severely hindered by the need to dig around for the disk and then insert it into the disk drive before I could play it. That may sound petty but I’m not a console gamer, my disk drive is pretty much only there for media ripping and I haven’t had to use a game disk regularly for about four years.

It’s worth starting with the statement that X-Plane is first and foremost a simulator rather than a game, to the extent that the Professional version is FAA certified. There isn’t a great deal of hand-holding and the interface isn’t going to bend over backwards just to satisfy those comfortable with Apple levels of simplification. Microsoft actually managed to sink their flight simulator line with an overly simplified game where there should have been a simulator, see the short-lived Microsoft Flight for more on that. X-Plane can be a tad difficult to get into although the manual is included and will guide the player through just about anything they need. There is to some extent a game element as realism elements can be scaled back to whatever the player wants. This is probably a good plan for starting out as you can become familiar with the various elements of flight without worrying about shearing the wings off. For those that want a more full experience however the simulation is fairly accurate. The lift and aerodynamic modelling is done entirely in-engine through real time physics calculation, to the extent that it’s possible if you want to view a variety of different graphical representations of lift and airflow over the aircraft. This is cool as well as adding a certain authenticity to the simulation as its possible to see the varying airflow over control surfaces or lift on the wings. Whilst I wouldn’t say I was anything close to an experienced pilot I have had a reasonable amount of time in light aircraft and from that I can say that flying in X-Plane 10 feels about right.

The scenery is global, although dynamically generated from map data using pre-baked resources. The result of this is that whilst much of the world can look right there are some instances where the world generation has messed up a bit, if you want photo-realistic scenery though it is available as a third party purchase. The world contains a significant number of airports, airfields and heliports and these are populated by AI controlled aircraft which will operate within the game’s air traffic control (ATC) system. These AI controlled aircraft are pulled from the library of aircraft installed at the time. These aircraft are generally very good although some are a little less polished than others. There are also freeware and payware add-on aircraft available. The ATC system is rather nice actually, it will generally stay out of your way if you wish to just mess about (something that I imagine real ATC would not do) however it can provide an accurate experience if you wish. I’m currently flying a route which I’m doing in legs from Nottingham to London, London to Cornwall, Cornwall to Birmingham and then Birmingham back to Nottingham. On each leg I am (although it’s not necessary) logging my flight plan and requesting all the appropriate clearances from the air traffic control system. This little tour is also allowing me to brush up on that various navigation systems within X-Plane which are modelled accurately on their real life counterparts. Using the GPS as a cheaty point-and-go backup I’ve been attempting to learn the radio navigation systems with the help of SkyVector.com aeronautical maps. I’ve played about with flight simulators for quite some time and it’s nice to actually get down to learning the navigation systems, altering the differing modes, frequencies and beacons to get the desired result.

This little tour has also been done with real-world time and weather data pulled by the simulator from the internet, so to all intents and purposes it’s as close as possible to the real thing. This actually makes things quite a lot harder as I often can only play in the evenings and the weather recently has been crappy at best, but it’s extra challenge. The weather simulation is great with pretty much fully detailed dynamic weather including temperature, wind, clouds and precipitation simulation among more. The lighting is also impressive with dynamic shadows and lighting creating some really pretty views at dawn and dusk. The lighting and weather can certainly make for some very hairy landings.

System requirements are fairly high as would be expected with a simulator. It may run on low-mid range hardware but you’re not going to be experiencing the simulator at its best. The recommended specifications on Steam are a 3GHz multi-core CPU, 4GB of RAM, GPU with 2GB on-board VRAM and 80GB disk space. This is no small potato and is far flung from a toaster game however if you’ve got the system to play it then there is no doubt that it is a great experience. I would also point out that whilst the keyboard or a gamepad would suffice for the most part a joystick enhances the experience, a HOTAS joystick-throttle combo even more so. X-Plane 10 is also Windows, Mac and Linux compatible (compared to Microsoft Flight Simulator X which is barely compatible with Windows 8.1) which makes it pleasantly completely cross-platform. Might I also recommend the likes of XHSI which allows the simulator to pipe telemetry to virtual instruments on the same computer or over the network, something I used to turn a laptop into a multifunction display. The cost is the real kicker as X-Plane 10 will set you back £45.00 (approx $72.20), a cost that is probably justified by this being a globally encompassing fully featured simulator but also a little steep as an impulse buy. There is however a freely available demo to try.