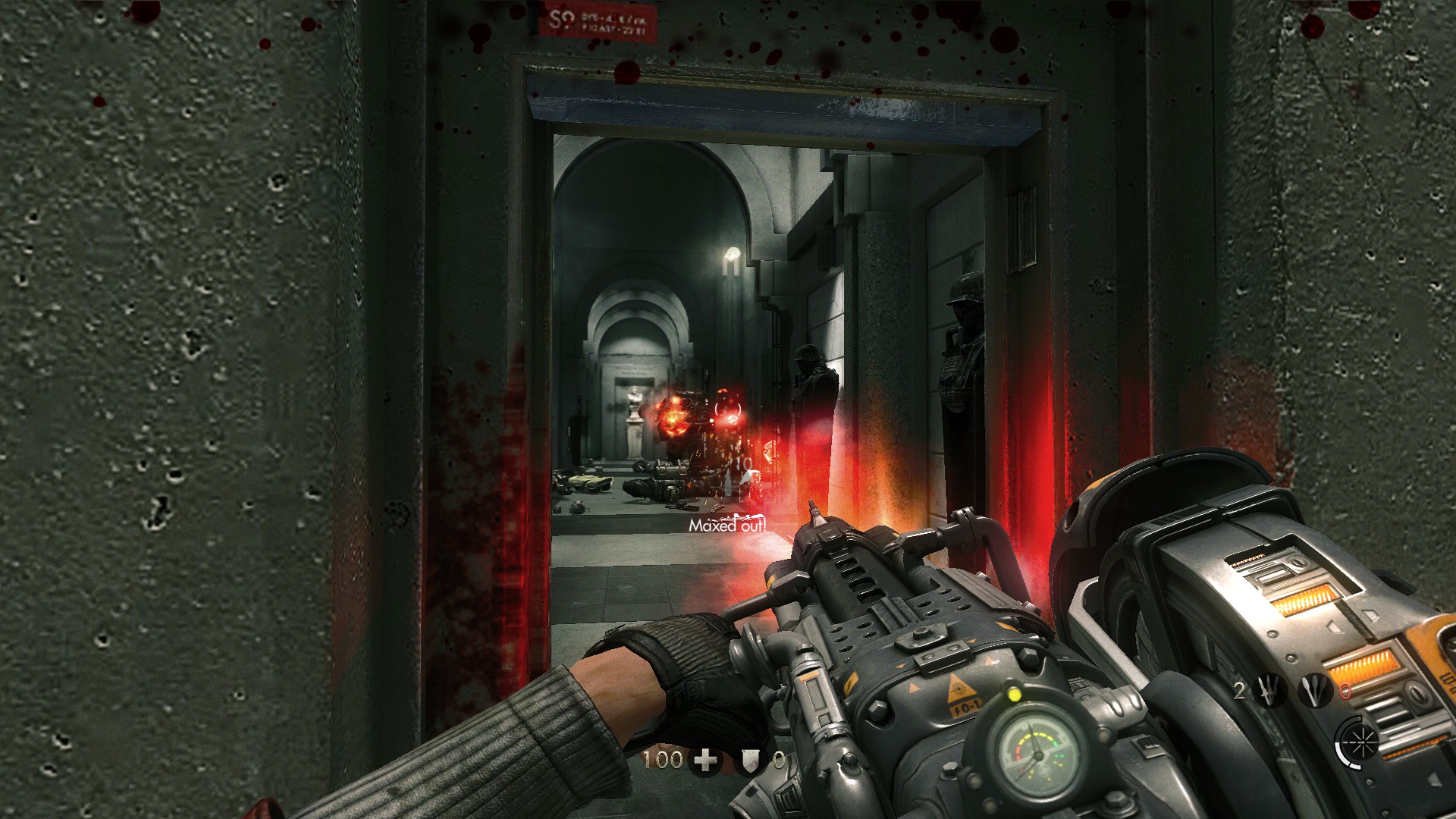 Wolfenstein has a strong pedigree in first person shooters with Wolfenstein 3D being up there with Doom in terms of genre significance. (Fun fact: Wolfenstein 3D can be played in-browser on the Wolfenstein website). Wolfenstein: The New Order is a modern take on the classic formula and whilst this is an exciting prospect people were understandably sceptical. There’s a great potential in modern reboots of classic games for certain less-than-stellar modern FPS tropes to degrade the whole experience. This scepticism may well have been misplaced as Machine Games have gone and given Wolfenstein the same treatment as Flying Wild Hog managed to give to Shadow Warrior. The fundamental premise of Wolfenstein: TNO is that through the use of advanced technology the Nazi regime won the Second World War and proceeded to construct the global Reich. The game initially places the player in an assault on a Nazi compound nearing the end of the war and then jumps to the alternate future 1960 whereupon the Nazis have complete control.

The gameplay is probably most comparable to the likes of Half Life I suppose. The game is a fairly linear move from one fight to another occasionally broken up by cut scenes and level changes. This is in no way a bad thing and it has been done exceptionally well in this particular case, the story-continuation and plot make up for the relative linearity of the experience through giving meaning to it. The plot itself is well written as it fits nicely into what is a nicely crafted alternate history. For those looking for lore there is a whole ton of it scattered around the levels in the form of newspaper clippings, posters, music, slideshows, personal character histories and overheard conversations. There is enough world building that it is easy to become engrossed in the game and have the game plot and your acts given meaning in the wider context. I’d say that the world building is on par with another lore-heavy game of recent release; Dishonored, which really is the bar to be aimed for. One minor complaint about the world construction would be how completely dead and lifeless much of the world seems. I understand that this is the Nazi dominated post-war future, however there is little to no civilian presence whatsoever as entire cities seem completely abandoned apart from hordes of Nazi soldiers.

The first person combat must be mentioned as it makes up a significant portion of the game and is thoroughly enjoyable. There is no weapon limit, in classic shooter style you can carry all weapon types simultaneously. These weapons include the regular standards of first person shooter goodness; knife, pistol, assault rifle, automatic shotgun, scoped rifle and grenades. In addition to these are the likes of a laser weapon that must be recharged from wall sockets and secondary fire modes on all of the standard weapons as well as dual-wielding on most; knife throwing, silenced pistol, underslung rocket launcher, ricochet shotgun rounds and tesla grenades. This gives you a lot of freedom to shoot and explode things in whatever manner you feel would be suit your mood, or at higher difficulties in the manner that the situation may require. The enemy variety is equally impressive as even the regular grunts will vary from level. On top of the varied grunts are the armoured soldiers, the even more armoured soldiers, the even more even more armoured semi-mechs, the regular robotic mechs and the massive robotic mechs… oh and enormous bosses, armoured hounds, big robotic hounds and small robotic flyers. That’s a lot of enemy types and the levels are varied too, everything from escaping an asylum to a wrecked bridge to shooting Nazis on the freakin’ Moon! (Loved that level!) These different enemies require different weapons and different strategies, and the game will often mix up them up into deadly combinations. The overall balance of the game is good although I’d say it could be a tad easy, I’m playing through my first run on the hardest difficulty available and whilst there are points of multiple checkpoint attempts, there’s nothing that seems utterly impossible (apart from one section, but that was probably down to the non-stop post-8-hour-shift 10 hour play session than the difficulty of the game). Overall the shooting is fun, run-and-gun in lower difficulties and a little more tactical at the higher difficulties. The game will often provide a stealth option too, allowing the use of the silenced pistol and uber-OP throwing knives. This stealth approach becomes less feasible later on when most of the enemies are too armoured to allow easy one shot kills but it can come in handy in certain scenarios.

The aesthetic and the music relate very closely to my earlier comments on world building. The design is exceptional, taking the advanced technology and combining it with the modernist Reich style. There is little about the visual look of the game that I would improve upon and the design, models and animations followed the plot and history building devices in creating a believable and engaging world for the player to become absorbed in. As I said earlier, the worlds could do with a few more people so as to feel a little less desolate, even just some Aryan civilians milling around in the distance would do. The music is awesome and for once I didn’t turn it off just for the action-movie atmosphere that it gave the experience. There are also a handful of New Order covers of 60s songs including a brilliant House of the Rising Sun cover in German.

Wolfenstein: TNO is available on Windows with system requirements that are relatively high by the standards of my game reviews: 64-Bit Win 7 or 8, Intel Core i7, 4GB RAM, Nvidia GTX 460 and 50GB HDD space. That’s a fairly beefy system requirement and I’m tempted to say that the processor requirement at least is a little over the top, I’d say a core i5 would probably work but don’t take my word on that. It’s also available on those living room boxes that people that can’t use computers like to play with.

In short then Wolfenstein: TNO is a surprisingly competent title that delivers a brilliant single player experience by combining great aesthetics with enjoyable gameplay and an engaging plot and lore. If this and Shadow Warrior are to set a trend for new imaginings of classic titles then I’m all for the idea as there is certainly space in the gaming market for exactly this kind of game.

Wolfenstein: The New Order on Steam: