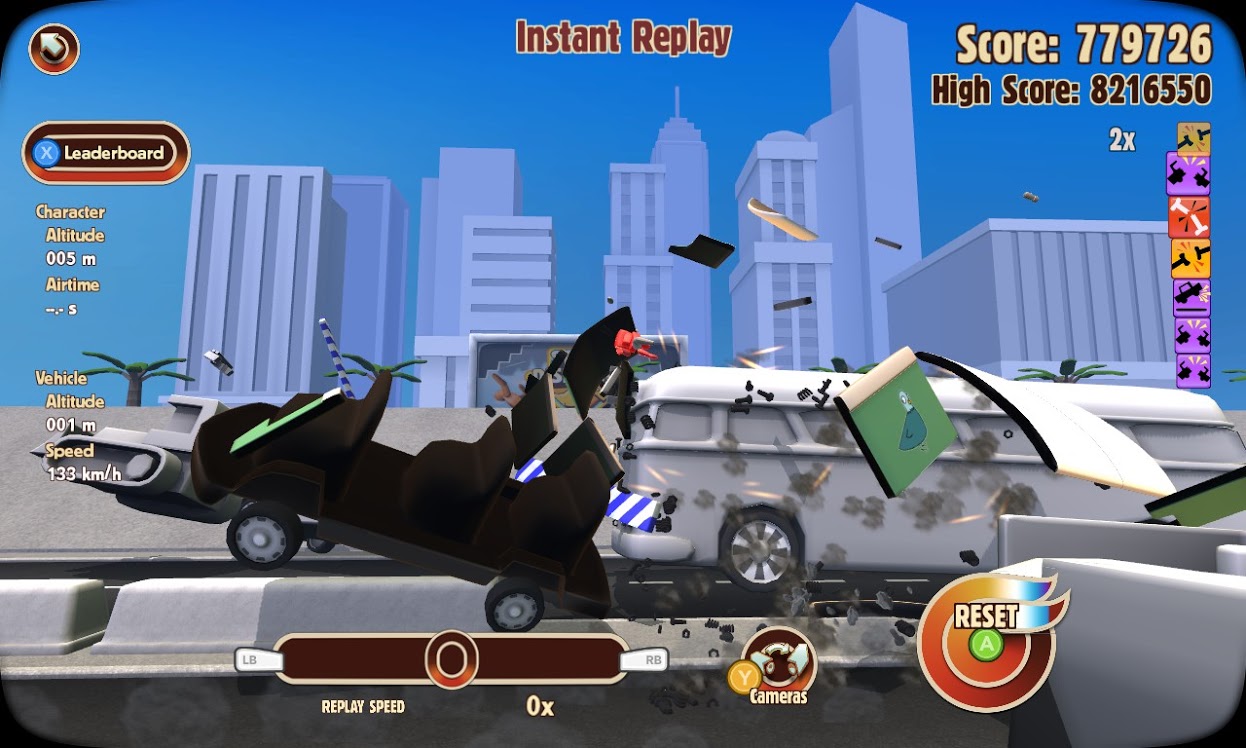 After the seriousness of the last review I’ve decided to revisit something a little more silly: My original preview of Turbo Dismount was way back in February when it was only just released on Steam Early Access. The game got its proper release a while ago but I’ve waited a while as the post-release patches were proving rather interesting in furthering the potential of the game. There’s actually another reason that I’ve been struggling to write this review and it’s mostly down to having to stop playing the game. You see I’ve had it open on the other monitor in a window for quite some time now and rather than being secondary which is what the monitor is for I’ve instead just sat and played the game with an empty page staring me in the face on the primary monitor… and I’m not even sorry. Thankfully this is a game that has thrived in Early Access, resulting in a final product that is not only polished to the developer’s desire but also incorporates quite a significant amount player feedback, and increasingly user generated content.

The gameplay has remained exactly as it was in the Early Access release, albeit refined and bug free. This is a playground for destruction, although I can imagine a certain crowd launching into a tirade about “video game violence” upon seeing it. Let’s clear that up right now: The game goes to great lengths to separate its content from reality, there’s no blood or injury sounds and the character is intentionally a crash test dummy. This is not a sick fantasy, this is a toy based around fictional chaos and destruction; and the stress relieving properties and fun that can be gained from such things when abstracted far from real consequence. There probably is an issue at the very heart of their rabid ignorant complaints but it’s not something unique to games in particular and instead with the manner in which violence is understood and parsed by western (or indeed human) society as a whole. With that out of the way let us continue to discuss just how utterly entertaining Turbo Dismount is. The replays are among the most entertaining aspects, with the combined abilities of absolute time-flow control and various camera angles allowing for some mini film making. Turbo Dismount did the whole first person camera thing long before the next gen GTA5 had a go and to great effect. The free camera, character camera and vehicle camera provide some highly entertaining bullet time like collisions as the developers have added random mechanical parts as particle effects on big vehicle impacts. This means that not only are there bits of vehicle, other vehicles, bits of scenery and the character hanging suspended in time during a replay but also an added volley of cogs and gears flying forth. Set up the collision, let it run, get the score and then rewind, play, freeze and super slow motion that collision to your heart’s desire in the replay. It’s simple, it’s fun.

Since release the developers have been supporting the game admirably and importantly have continued to support and push their level editor. Combined with the Steam workshop (as it is) this opens the game to almost unlimited potential as user generated content can continue to grow even if the developer decides to move on. This is also a great thing for sales or at least drawing in customers as the continued flow of user generated content provides that brilliant modding effect that make some of the strongest games what they are (Elder Scrolls, Civilisation, Minecraft, et al). I can’t support such a move enough and combined with one of the most successful Early Access periods I’ve seen the developer has really shown that they can handle community feedback and implement it well. Further updates have continued to bring additional levels, vehicles, bug fixes and the occasional holiday fun. There’s also been controller support with well integrated prompts within the user interface to make the experience clear, I’ve yet to try the controller support fully although I have some fairly fun ideas of messing around with friends using the Steam remote play to get some Turbo Dismount on the big TV! That’ll be a fun time of score attack and creative destruction.

In short then Turbo Dismount represents the real potential that Steam Early Access, and other such initiatives offer in helping developers create the game that they want whilst also integrating user feedback to create something that everyone is happy with. There is no doubt that the developer deserves praise, especially with the positive continued support of the game which includes free content in addition to bug fixes. The system requirements are Windows or Mac with an Intel Core 2, 1GB RAM, DX9 compatible GPU minimum… so they’re almost toaster levels meaning that this is probably a reasonable laptop game with a lowered resolution. Pricing wise the game is £6.99 (approx $10.99) on Steam and £6.36 (approx $9.99) on the site through Humble and as ever I highly recommend the Humble option. The website also still has a freely playable demo built in, so if you’re at all intrigued by this review then head on over.

Aside: At the last minute before submitting I found the mobile version, it appears to be a free-to-play title on Android and iOS providing three vehicles free with others unlocked through micro-transactions. This seems fair-ish and I will check it out, ignore the crass idiotic mobile reviews and report back.