TIMEframe was something of a pleasant surprise for me as it just sort of appeared. Some time ago I got in on Random Seed Games’ Lacuna Passage Kickstarter because space and Mars and… well what more do you need. I haven’t actually been following the development that closely until recently when TIMEframe appeared and an update popped up in my inbox offering me my free copy. I looked into it further and it turns out that TIMEframe was the product of a game-jam which had then been polished for commercial release. I’d gotten a copy as a thank you to Kickstarter backers for patience regarding the development of Lacuna Passage, neat. TIMEframe is an interesting game, a walking simulator along the lines of Proteus, the idea is that 10 seconds is slowed to a point where it fills 10 minutes, and that 10 seconds is the last 10 seconds of a civilisation. The result of this is a slow and serene world to explore in 10 minute chunks before that big rock falls out of the sky and hits.

The world itself reminds me a great deal of thatgamecompany’s Journey on the PS3. (A game that I adore and which to this day has justified the purchase of my PS3 all by itself, I’ll write more on it one day because it is a stellar game.) TIMEframe has a similar feel to it with regards to the world, it is an abandoned settlement in a desert environment with the accomplishments of its creators scattered around to find. I find a great deal of satisfaction in this in a way that perhaps I don’t find in other walking simulators like Proteus, that satisfaction being the archaeological aspect of the experience. I love moving through the abandoned remains of a dead civilisation, uncovering a narrative of the past and the culture through the architecture and snippets left behind. There’s something very satisfying about moving around an empty, alien place that should be eerie but is instead immersive and satisfying. Where, say, Proteus was an exploration of nature with the temporal axis buried within the cycles of that nature through seasons this is an anthropocentric exploration with the temporal axis wedged in the history of the civilisation. This is where an interesting comparison can be drawn between the two games and how they treat time, with Proteus time is almost unlimited in a very natural way with the game eventually ending in calm manner whereas TIMEframe treats time as finite, both for the player and the world. In TIMEframe the player is restricted in exploration time, an interesting choice perhaps more intended towards the human aspect of an end, in this case of the civilisation. On one hand I feel that this was a wise choice, that this gives an interesting link between the player and the empty civilisation around which they walk on the other hand though I think it doesn’t fit the archaeological aspect very well. Had this portrayed the last 10 seconds of the civilisation at its peak, moving in slow motion through crowds of people, finding those that are panicking and those that have come to a grim acceptance, the limited time would have worked very well. This is not the case though and I feel that the nature of the abandoned civilisation lends itself far better to a prolonged archaeological exploration more in line with the sensations of age and antiquity that it affords. This is not to say that I don’t like the way this design has been implemented, I just feel that the 10 minute limit on exploration stunts archaeological exploration and forces the player to rush a little rather than mull over the world that’s left/been lovingly crafted.

Continuing that discussion of the crafting of the game we can look at the aesthetic and sound design. The music has the potential to be a fairly key element in a game such as this, that much is certainly true for Proteus. The composition here sets the mood very well and complements the slow and sombre pace of the game, whilst also nodding to the cultural stylings of the world, again it’s really quite similar to Journey. Aesthetically the game is a heavily stylised low poly affair with some beautiful textures and top notch graphical effects. These are exemplified by the slow passage of time, making the effects appear to hang in the air so really they needed to be pretty. This is a good looking game with a well realised yet relatively simple art style, it is the quintessential indie walking simulator, and it’s great for those reasons. 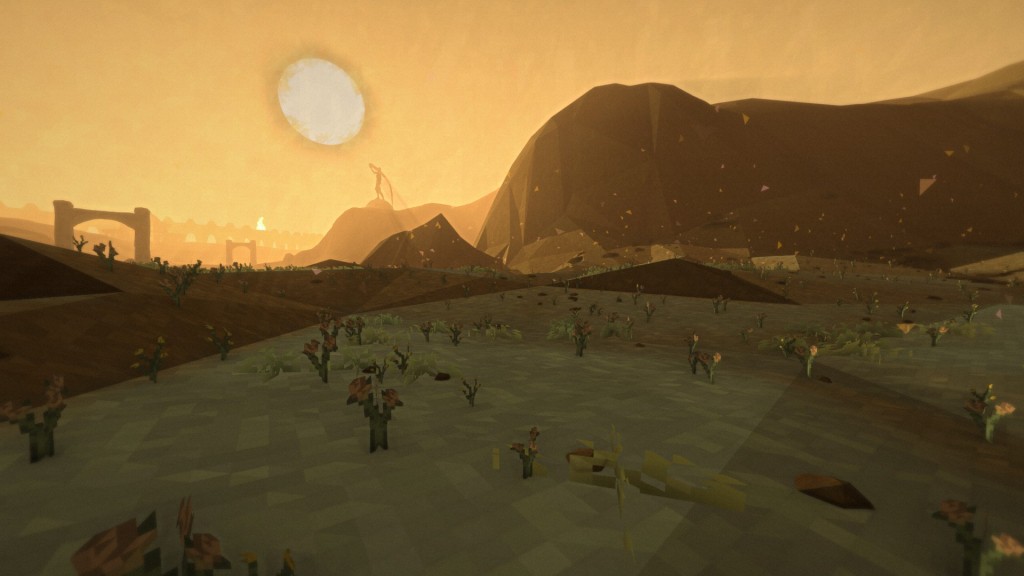 The game is currently available for Windows and Mac, although it’s Unity so I’m not sure why a Linux version isn’t possible. Looking at the developer’s blog may answer some questions regarding the lack of a Linux release, it seems that this project is a funding effort primarily, something to tick the developers over whilst they continue to work on Lacuna Passage. I’m guessing that this means that they aren’t really willing to put any more time than they have to in attempting to build and test a Linux version. That being said I would think working on perfecting Linux development now could be useful practice come the release of Lacuna Passage, but I’m operating on limited information and assumptions. The hardware requirements are not particularly taxing, just about any machine capable of running 3D Unity stuff should be ok. Overall TIMEframe was a pleasant surprise for me and whilst some of the decisions seem a little odd to me, I’m not averse to the form of the final product. Whether it’s worth the $10.00 or so that it’s going for is really down to personal taste and how much value one finds in walking simulators but one thing for sure: this makes me very eager to play Lacuna Passage when it’s done.