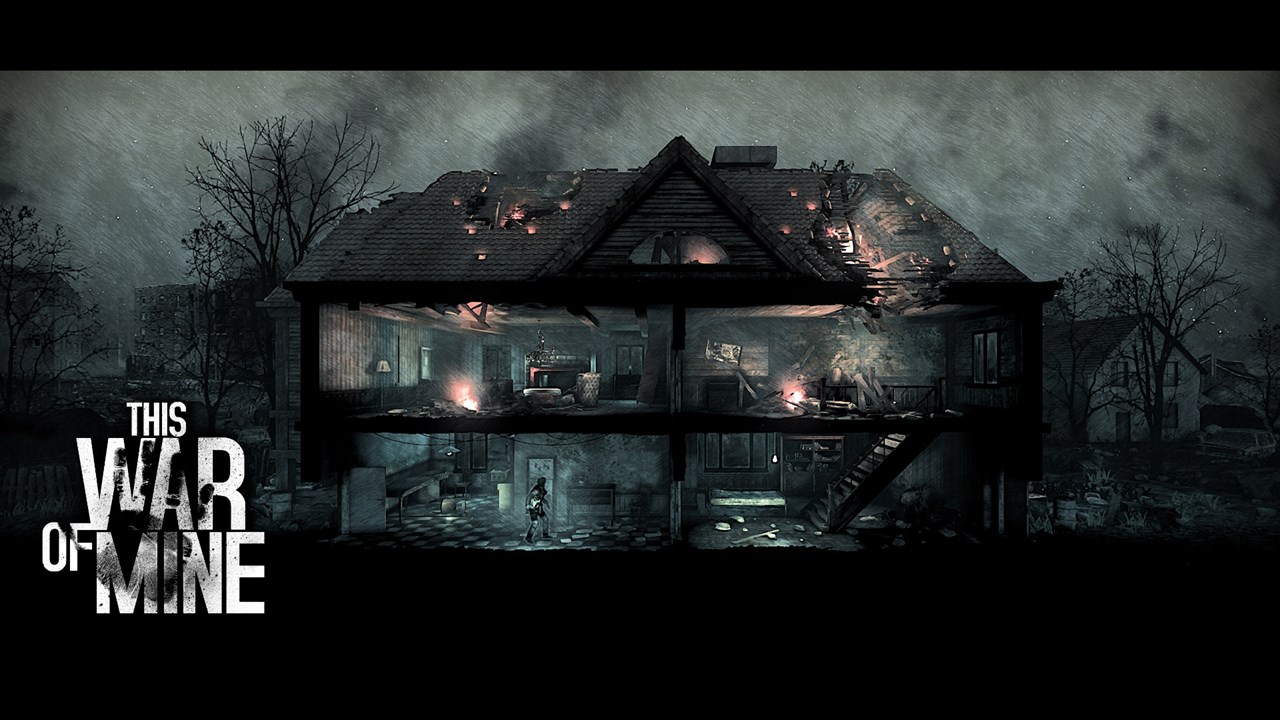 This War of Mine is an indie game that has the explicit aim to reposition the player within the oft-covered gaming topic of war. It represents a counter-balance to the blasé jingoism of the modern military shooter; Call of Duty, Battlefield and the like by repositioning the player away from the god-like American super-soldier trope and instead into the position of a civilian in a conflict zone. For this reason the first section of this review will primarily act to place This War of Mine within the wider context of self-aware and self-unaware approaches to war within games as of recent. The topic here is straying very close to my academic field so this may be a little more analytical and in-depth than most of my reviews, as these remain important issues not only in games but western society in general that’s probably not a bad thing. This War of Mine isn’t the first time a conscious response has been made to the mindless jingoism of modern military shooters: Spec Ops: The Line assaulted the bastions of the military-industrial-media-entertainment complex (see Der Derian for more of that goodness) through a Heart of Darkness-esque plot stripping away all the ethical certainties of the situation. This represented a critique of war from the soldier’s perspective, a victimisation through explanation of the almost Nietzschean core of the soldier exposed by the removal of civilisation. I’m not particularly fond of this critique and its assumptions on human nature, however it was particularly pertinent in the face of the direction that Call of Duty was and continues to be headed.

Of a differing critique, the surprisingly mature Wolfenstein: A New Order actually started with the American super-soldier trope and injected a degree of war-weariness and self-recognition into the character of BJ Blazkowicz, generating a character that is both deeply troubled by his role in the world but also grimly accepting of it: “What the f*ck did I just do?!” “Mayhem and destruction like you always do, it’s just you doing you!” That the character of Blazkowicz even asks that question to begin with shows more depth in one scene than the entire Call of Duty series. Interestingly enough Wolfenstein also explored the civilian impact of war through a set of secondary objectives related to the love interest’s past, mostly focusing on the dissent and resistance elements with a hint of psychopathy thrown in for good measure, mostly in emphasizing the critique of the glorification of violence.

This War of Mine represents yet a different perspective to war again, that of a civilian trapped within a war zone. This is not a tale of resistance or fighting or conflict, but scraping by and surviving. I feel that from a thematic perspective this is simultaneously the greatest strength of the game and the greatest weakness. The perspective of a civilian within a conflict zone, with the emotional trauma and physical suffering that it entails is a vastly under-represented aspect of conflict within the gaming world and in generating awareness of this additional layer of social interaction within conflict a counter-narrative is thrust against the mindless jingoistic celebration of violence and war that is the modern warfare genre (insofar as it could be called that). Simultaneously though I feel that the survival aspect of the game places it within a very well established and saturated gaming niche which very often acts in a manner against the messages intended. Take the staple of the modern survival game; Day Z and we see some of the most Heart of Darkness behaviour imaginable. This is a survival sandbox whereupon consequences are limited and abandoning civilised conduct becomes a necessity as the player base all move towards that same end. This War of Mine attempts to overcome many of these issues by introducing psychological harm to the playable characters if and when they must abandon the civilised values that they still cling to when all around them disintegrates.

The problem arises when this just simply isn’t enough, the management style of the game places the player in a transcendental position, literally beyond the flattened three dimensions of the game world and as such the capacity for empathy is quite severely limited in comparison to say the images of multiple civilian victims of the player in Spec Ops or even the haunted look in BJ Blazkowicz’s eyes in Wolfenstein’s rather well constructed cut scenes. The player has a connection with the character and the world in these scenarios that provide a strong basis for empathy where perhaps This War of Mine lacks that. The War of Mine becomes too gamey, in attempting to teach the player of the difficulties of survival as a civilian in war it unintentionally becomes a mechanical survival game just with psychologically weaker characters. The player may find themselves urging the character to “pull it together and go and fix that stove” after a traumatic event as opposed to empathetically sharing in that character’s painful depression and despondency. The goal of This War of Mine is genuine and is achieved to some degree, but I feel that placing the player in a transcendental position beyond the confines of the game world’s flattened three dimensions means pushing said world beyond the player along with the consequences. The player has agency over the actions of the characters, but without responsibility this agency devolves into a utilitarian player perspective, not an emotional actor’s perspective.

The manner in which the player is taught also operates to further this point, much like its other survival cousins This War of Mine follows the logic of learning through failure, which normally is a reasonable way of forcing a player through a steep learning curve. The problem arises when this play-die-restart loop is combined with the message of the game and the requirement of speaking this message through building player empathy with the characters. The play-die-restart loop intrinsically dehumanises the characters down to their mechanical function within the game. The player will only maintain empathy for so long in the face of repeated cycles, essentially handicapping any attempt at emotional content in the later game as the player has had to abandon the emotional project and instead invest in the pure mechanics of the game to get that far. This isn’t objectively true of course, some players may maintain an emotional connection through many play-die-restart cycles and some players may be so detached from their gaming staples that they lacked any emotional connection to being with, but on the whole the impact will generally fade. The implementation of a set cast only acts to further the devolution to utilitarianism: There’s only so much emotional engagement I can have with a character who has died four times already, it somewhat blunts the impact of their suffering and inevitable fifth death somewhat. I’m aware that the developer’s decision was to have that cast list specifically as to put across the point that these are normal fully fleshed out ‘real’ people, however that seems to have backfired somewhat.

This all sounds very negative and it doesn’t mean to be, This War of Mine is a good game and it is doing important things. The caveat to that statement is that the implementation and the style of game has detracted from the message somewhat, the mechanics function to strip intended emotional impact by reducing the game to a literal survive-by-the-numbers, management game. Had the player a closer emotional bond with the characters, perhaps through a differing game style, perspective or refocusing on immersion aspects then perhaps the message within the game would be clearer. On the other hand had the game been redesigned along those lines it may not have sold as well and the deeper message would have a smaller audience, as opposed to my fear that in its current form the game’s message may actually fall upon deaf ears.

This War of Mine is certainly worth checking out, if only to prove all the above wrong by having a genuine revelatory experience about conflict with it, in which case I’m glad to be mistaken. The developers have worked hard to produce a game that is actually good as a game, but that achievement simultaneously detracts from the message that it’s trying to get across. Perhaps just the construction of narratives of civilians in conflict is enough to offset the above stated problems, but if that’s the case then the game falls down the same traps of indifference as televised scenes of devastated civilian populations. The viewer/player is detached from the subjects and therefore the potential for empathy is quite severely weakened in comparison to other methods of interactive engagement that games alone are capable of. This War of Mine is available on Windows, Mac and Linux for £14.99 or $20.00 across the board (although Humble is always the best option). The system requirements aren’t especially taxing and it will run on my X220 (HD3000) with the settings down quite happily.

This War of Mine on the Humble Store:

This War of Mine on the Developer’s Store:

This War of Mine on Steam: