[Just a side-note before we start: I don’t like it when games have colons in the name, it messes with my article titles :'( ]

Hunting games get a bit of a bad rap and to some degree for good reason. Whilst the idea of wholesale homicide seems relatively acceptable, the killing of anything else is morally reprehensible. I think it’s down to the representations of agency, and within certain contexts games actually follow this, especially some wargames. This argument falls over sideways when one considers the likes of GTA which will allow the killing of just about anyone, regardless of their agency within the situation. I’m not naive however and I understand that GTA generally does not encourage or reward such indiscriminate killing, but it also doesn’t punish it very heavily either. Certain war games have a generally much less accepting view on the indiscriminate killing of humans and I suppose following those same rules hunting games seem like an extension of the unnecessary killing of innocents, however in a world where the likes of GTA are an accepted staple in gaming, the moral reprehensibility of hunting games loses much of its sting. This setup is mostly to defend theHunter as it stands, which is ironic because I’m not looking at theHunter but instead its standalone cousin theHunter: Primal (tHP). This takes the hunting basics of theHunter and swaps out the pleasant grassy forests and plains for fern filled mountains and forests; and importantly it takes the subjects of the original hunting theme and replaces them with dinosaurs. Dinosaurs are cool, and very dangerous.

The hunting mechanics in tHP are much the same as in theHunter, with a small handheld device being able to identify and analyse traces of whatever you’re hunting, or being hunted by. This is really the key difference in tHP and probably what makes it more interesting than it’s standard hunting cousin, you’re just as likely to be hunted as you are to be doing the hunting. The handheld is capable of identifying various aspects of the dinosaurs from droppings to roar to foot steps. Taking down a dinosaur is another matter entirely as the availability of weapons is entirely different to theHunter. Where its cousin relies on a microtransaction system to enable the purchase of additional weapons and equipment, tHP is a standalone product that instead places equipment in drop-pods scattered around the map, swapping out the microtransaction wall with a survival/exploration wall and that’s a good thing. Whilst theHunter works as it is with the microtransaction system, tHP would not work as well. In the case of tHP a microtransaction system would remove much of the survival and exploration and replace it with a pay-to-win sensation, which theHunter avoids because essentially you’re hunting animals that aren’t likely to hunt you back. I commend the decision to make tHP a standalone and contained package, it displays a willingness from Expansive Worlds to move away from the microtransaction model whilst also retaining much of what makes the gameplay so appealing. 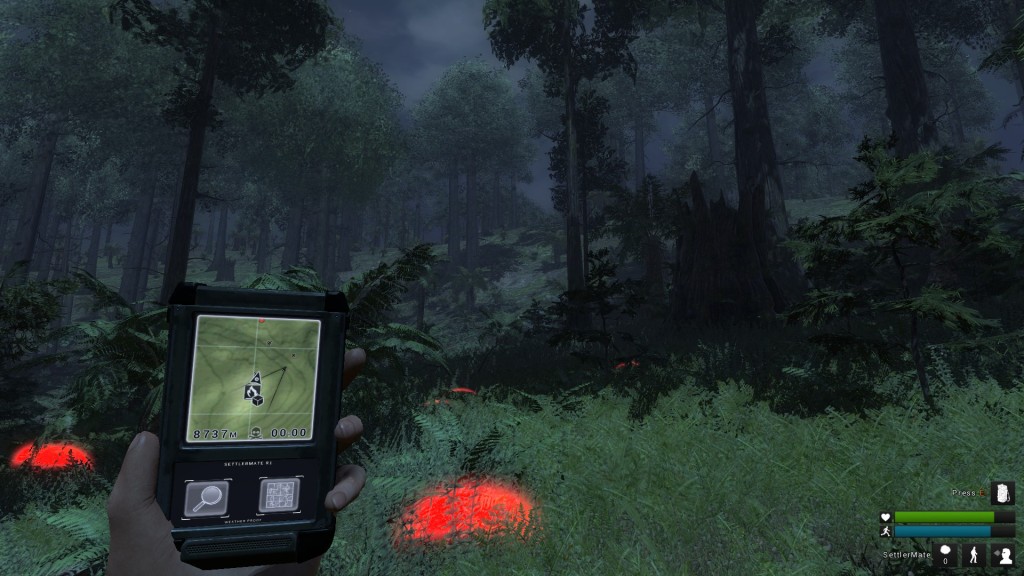 The sensation of moving slowly through a forest, trying to stay quiet and hidden not for the sake of startling prey, but for the sake of not becoming it is certainly interesting. The predatory dinosaurs are intimidating to say the least, whilst the Utahraptors can scared away or even beaten away with a machete, the likes of the Tyrannosaurus Rex are just to be avoided. The T-Rex is relatively obvious when moving, however it’s still possible to miss one that may be stood still, trying to sniff out something or other (you). Escaping the T-Rex is no easy task once it’s got you pegged as the limited sprint bar runs out very quick and its long gait means it travels a long way in a short amount of time. Killing the T-Rex is something of a challenge and one I have not accomplished yet, there’s a significant amount of mass and I can’t imagine anything less than the anti-materiel rifle doing any significant harm to it. Also consider the pointlessness of a headshot on a T-Rex, the brain is miniscule and contained within a skull of immense thickness so as not to buckle under the immense force of the huge jaw muscles. Long story short, shooting a T-Rex in the head probably won’t do much, I’d imagine the core would be a better place to target, knock out the heart and it’ll likely go down relatively quick, or a shot to the longs for the longer term kill. This is what makes the hunting so different to theHunter, you’re dealing with some extreme animals here, animals that will kill and eat you easily. 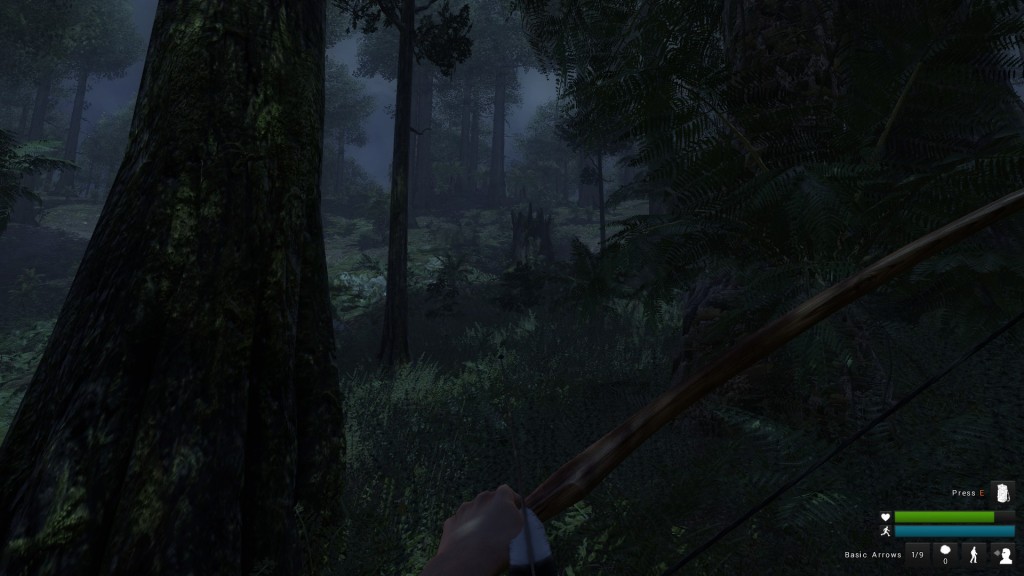 It’s not all clear skies though as there are some issues that hold back the title: The difficulty, whilst high can be a little on the unfair side at times. Respawns often happen within seconds of the last death and as such there’s a good chance that whatever killed you before is still hanging around your corpse. This makes corpse runs one of the frustrating elements of the game as I can’t count the number of times I got killed by the same flyer trying to get the pathetic loot that was sat on that particular corpse. It makes the respawn and recovery aspect of the game a little pointless as returning to the scene of the death will most likely just get you killed again, it’s normally best just to accept the loss and find somewhere else to go. In general the respawn mechanic feels a little strange, I understand that it’s there for the sake of multiplayer but it just doesn’t feel like something that should be in a survival game of this type. Perhaps the horribly difficult corpse runs are the game’s way of telling you that dying a stupid idea rather than just planting a big “Game Over” screen in front of you. I haven’t yet tried the multiplayer, so I’m not sure I have much to say on it besides that it allows PvP but I can imagine that it would be much more satisfying in co-op.

Aesthetically and graphically the game is very impressive, much like its cousin game. The realisation of the prehistoric world is very well done and ultimately an atmospheric experience. The dinosaurs are equally well done, although perhaps more variety would make the game feel a little more varied than it currently does. I’ve always been a fan of the appearance of dinosaurs that accounts for more recent palaeontological findings, specifically the feathers. Feathered dinosaurs move away from the scaly-lizard almost slimy look that the likes of Jurassic Park made so prevalent and as such they feel altogether more believable for it. The terrifying Velociraptor is finally the correct size and appearance, turkey-sized with feathers. (The Utahraptor on the other hand looks and is very threatening). 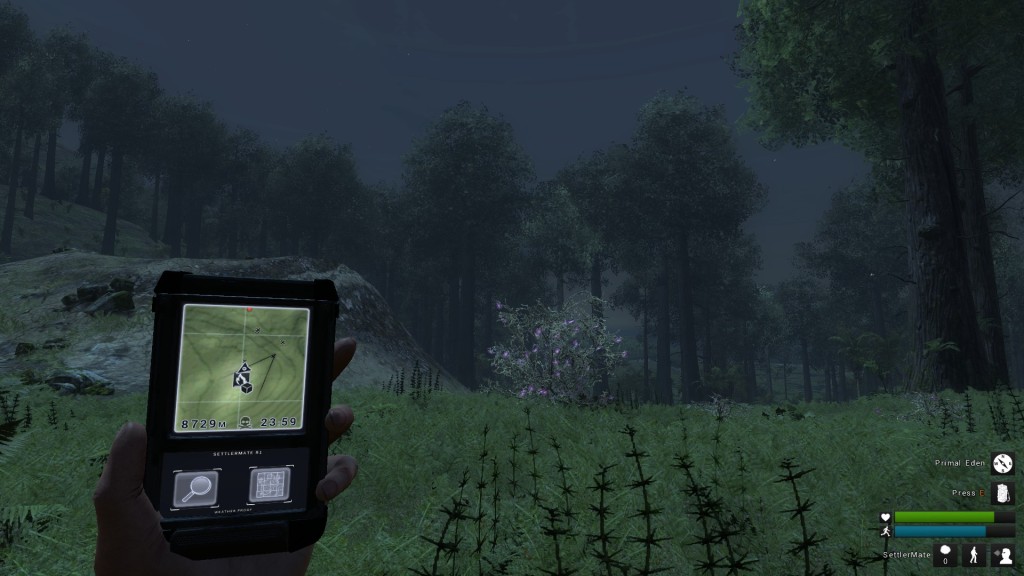 If anything, despite some of the shortcomings in the gameplay, this is one hell of a prehistoric walking simulator. The environment is brilliant and is only really lacking in additional wildlife to bring the currently quite sparse feeling world to life a little more. The really is the key point of improvement that the game requires, more content and more dinosaurs. More dinosaurs means more to hunt, more the achieve, a more interesting and living world and importantly shorter gaps of sneaking around the ferns between encounters. I’m hoping that the game will continue to get content updates as that may clear up some of the less than stellar opinions regarding the title.

System requirements are fairly hefty compared to many of the games that I look at, this is a pretty game and is not a toaster or even a laptop game. This is probably a gig for a mid-range gaming PC at least if you’re going to take full advantage of the title. Currently the game is £22.99 (approx $34.22), which if I’m honest is quite steep considering the content available. I believe i got the game cheaper during Early Access so my recommendation would be to wait it out until the content update situation becomes clearer or the game goes on sale.