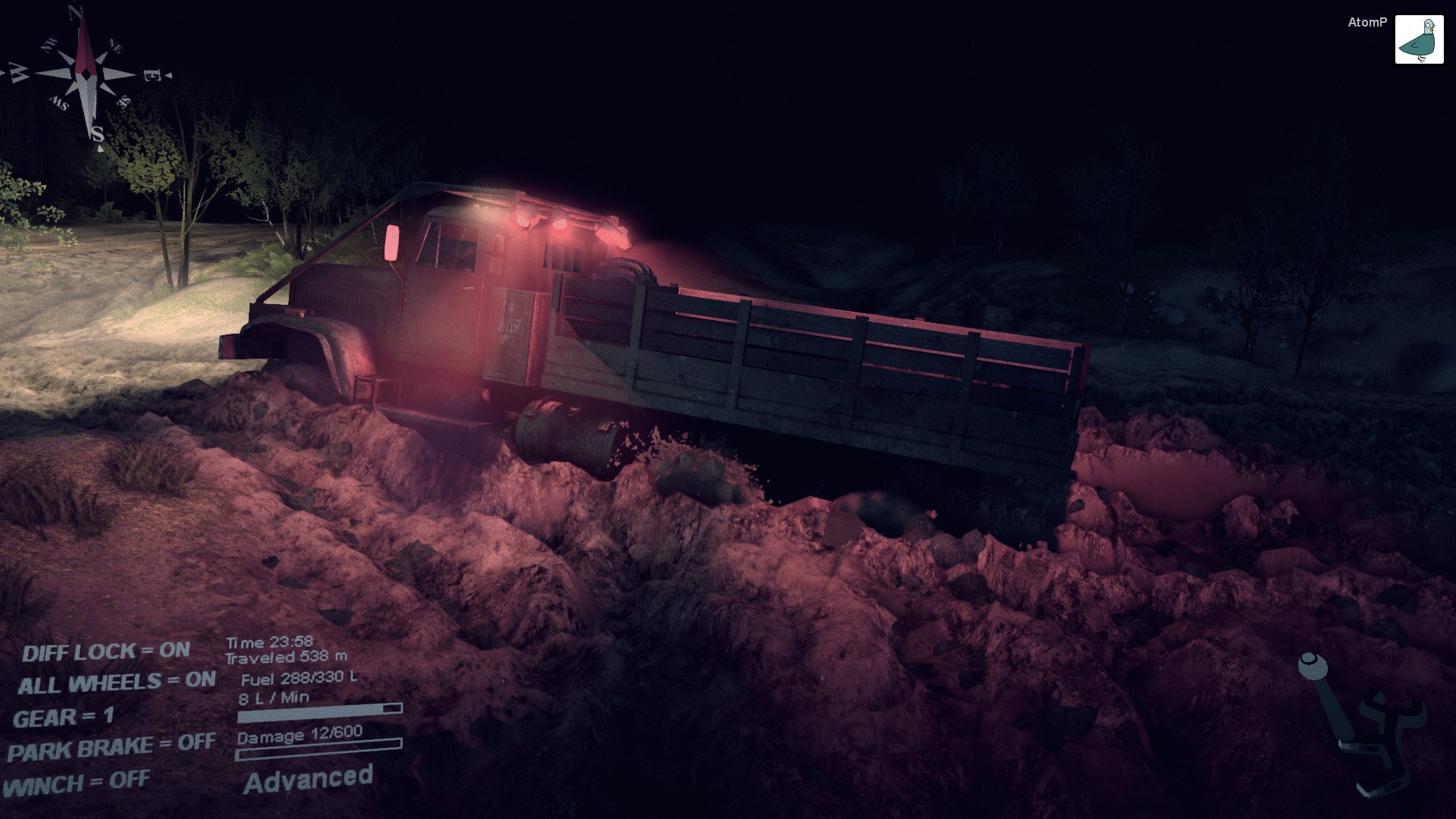 Spintires is an offroading simulator with some quite unique surface simulation. I would describe it best as a technical demonstrator that has been expanded into a game as the simulation and open world takes precedence over a directed gameplay experience. The game contains 5 open world maps of similar terrain and has a selection of Soviet vehicles to move through these maps. Having Soviet vehicles is an odd feeling as they don’t often make an appearance in games, the last experience I had with these vehicle types would be Operation Flashpoint (now ArmA: Cold War Assault). The bulk of the gameplay is centred around an accurate simulation of the vehicles and environment whilst the player works at moving lumber or just exploring the map.

The star of the show really is the environmental simulation; I’m about to talk about mud a great deal and I’ll be honest that’s really unexpected. The mud simulation is extraordinary as the terrain actively warps according to the pressure of the tyres and weight distribution. I’m tempted to hypothesise that the mud simulation is in fact a modified fluid dynamic simulation but with an altered viscosity. This guess is mostly based around the water physics in the game which appear to be closely linked behaviour-wise to the mud. Whilst I’ve seen deformable terrain in games before it must be said that I’ve never seen it done quite this well and in such detail. From a gameplay standpoint this introduces some significant traction issues and a necessity for fine throttle control. That is the essence of the game, careful use of the available engine power with the right gearing and very careful route planning. The player picks that up pretty quickly, I attempted tearing into a rather muddy stretch in 3rd gear at some speed without drive to all wheels and quickly found myself very very stuck. The dynamically occurring challenge of attempting to escape these situations is where the game shines: Carefully shifting between 1st gear and reverse in order to rock out of a tight spot can be gratifying, especially if it works. In the event of an seemingly hopeless situation the game gives towing and winching options. The winch can be attached to nearby trees and then used to pull the vehicle out of any particular scenario. There is also the option of towing a trapped vehicle free with another vehicle, thus providing use for the other vehicles littering the map.

The utility of the other vehicles does not end with towing as they can be given the ability to provide fuel for and repair other vehicles. These functions can be swapped out at the garages that are also to be found around the map through exploration. The garages serve to save your unlocked vehicle types and modify them to purpose. If for example your logging truck has become stuck in deep mud or has been damaged by large unwieldy rocks it is possible to grab an appropriately equipped high torque vehicle to repair the truck out or repair the damage done. This gives the open world a sandbox feel although you are still limited to what exists on the supplied maps, this could be a game where Workshop or modding support could be very effective.

The game is not ideal though; it is something of a one trick pony and it’s possible to tell fairly quickly whether it’s your thing or not. There isn’t much reward for progression so it’s down to the player to apply their own objectives which doesn’t always sit too well with everyone. The camera can also be a bit twitchy and unwieldy, which will hopefully be patched. I’ve also seen rumours of a first-person camera which I’d say is direly needed and would be very good for the game in the long run.

The graphics are impressive for a smaller game with the simulation depth affording a believability to the overall appearance. The manner in which rocks are torn from the mud which warps around them is not only impressive from a simulation perspective but also looks very cool even if the textures are not astonishing quality. The lighting is similar in that respect, the simulation affords attractiveness as the day-night cycle alters the way the lighting interacts with the terrain and objects. Driving at night is a nice little additional challenge as you’re forced to rely on the headlights and whatever additional lighting is available at the garage. In short, the game looks good because of the complexity and depth of the simulation; the way the mud warps, the rocks bounce out of the way, the trees bend against the mass of the truck and the headlights illuminate the whole scene.

Compatibility-wise the game is limited to being Windows only with reasonable system specs as recommended; dual core 2GHz, GeForce 9600GT, 2GB RAm as a minimum. Price-wise the game is actually rather pricey at £19.99 (approx $34.00). Unless you’re fairly certain that you’ll enjoy the game and be able to fully engross yourself in the offroading experience that it offers then I’d recommend waiting for it to hit a sale price. I’d recommend checking out some Youtube videos of the game or maybe trying the available tech demo before deciding to buy the game. Personally I enjoy it and the offroading Soviet truck experience that it offers and I reckon I’ll get my money’s worth, whether you will is up to you.