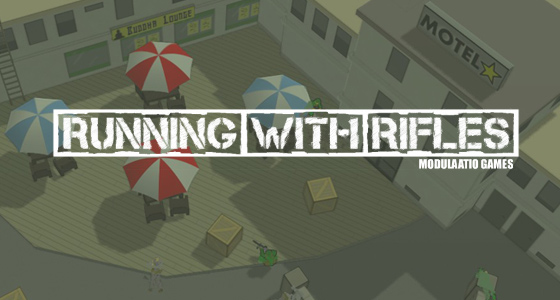 With the past couple of months representing a splurge in great game releases, it’s been difficult to decide what to play. Currently I’m looking at the release of the rather good Pillars of Eternity and the GTA V port among many others. Running With Rifles (RWR) struck me as particularly appealing and my little taster session of it turned into a five hour session, partially fuelled by beer admittedly. The game is a top-down shooter, somewhat in the gameplay style of Battlefield, although it’s rather more interesting than that. The typical form of a top-down shooter tends to be a bullet-hell arcade experience, however with RWR there’s a distinct focus on realism over arcade. There is no bullet-sponging or running-and-gunning here, but instead a slower move from cover to cover. Strategic positioning of armoury and respawn assets combine with a use of general tactics in approaching objectives to create a compelling experience, especially when the maps are 1km^2 and there are a rather significant amount of soldiers in-game. 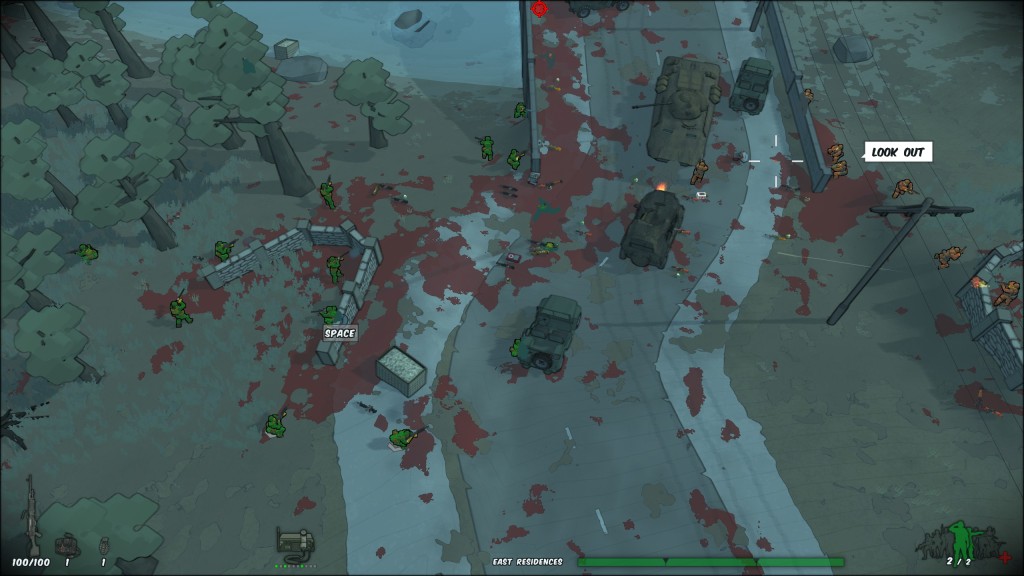 The game revolves around the capture of control-points, which can then be used as spawn points whilst under control. This is your typical open-world war game, however there are some interesting additions such as bonuses for destroying certain enemy assets. It’s also interesting to note that you are not an uber-powered super-soldier but instead just another grunt. As you progress and gain experience this begins to change, as you gain rank you gain the ability to have a team of AI, who will come to you after spawning and whom can be simplistically controlled. In general though you won’t be straying too far from friendly forces, at least without getting shot anyway. There are a variety of weapons, and whilst there’s no classes as such there’s certainly a leaning towards certain loadouts with certain weapons. For example the MMGs that the game offers complement the deployable cover brilliantly as these weapons can only be fired from prone or cover. The result can be a brutally effective defence, I held a bridge against countless waves of enemies with a good position and an MMG which is how it should be, however without the cover or a good position the MMG becomes very unwieldy offsetting its deadliness. (A part of me would love an LMG like the M249 SAW, but that may be a little overpowered). Other weapons are equally well balanced, offsetting their advantages with distinct disadvantages which creates a game where there is no single super-effective load-out but instead encourages diversification in armament and role depending on the situation. This in turn allows for more interesting multiplayer through co-operation with other players and also better single-player as the player must rely on the friendly AI for support functions. In some cases this could very well be seen as a negative point as quite often friendly AI isn’t very good, RWR doesn’t suffer from this thankfully and the AI both in your squad and out of it will generally be sensible. 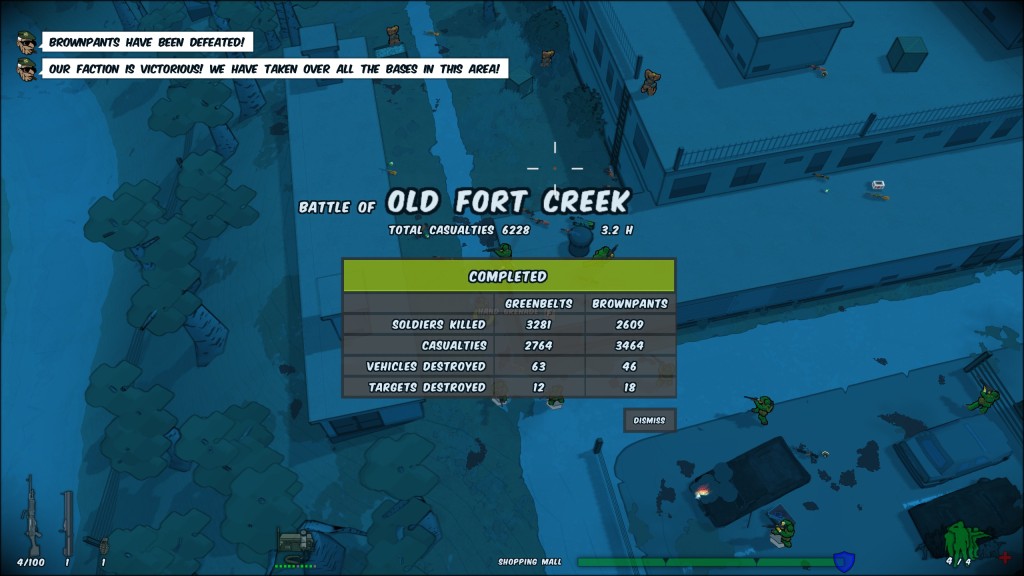 The single-player uses a campaign system that offers a progression through different maps/battles that must be won, and thanks to the dynamic and free flowing nature of the game it’s difficult to say how long these matches will last. I’ve had fairly short games that haven’t lasted very long but then I’ve also had a match where the advance got halted on a bridge and it took 3 hours to break the stalemate, not that I’m complaining. With this in mind and the replayability that the dynamic gameplay can offer, it’s difficult to say exactly how much time you’ll get out of the single-player but I’m tempted to say that if you enjoy it, you’ll get a great deal of time out of it. The multiplayer works on the individual maps, playing as matches much like the single-player. There is still AI in the multiplayer, reinforcing the idea of just being one among many although the players still retain their rank so they can have squads of AI following. This also means that the support calls are available, allowing for a paratrooper drops, mortar strikes and more on command. All of this adds up to a compelling multiplayer that does multiplayer right, taking the formula that makes the single-player fun and just adding more people. According to updates from the developer, the multiplayer is well populated (for a relatively small game) so there is even the potential for fun in pubbie matches, especially as the game is relatively pubbie-match friendly in its mechanics. 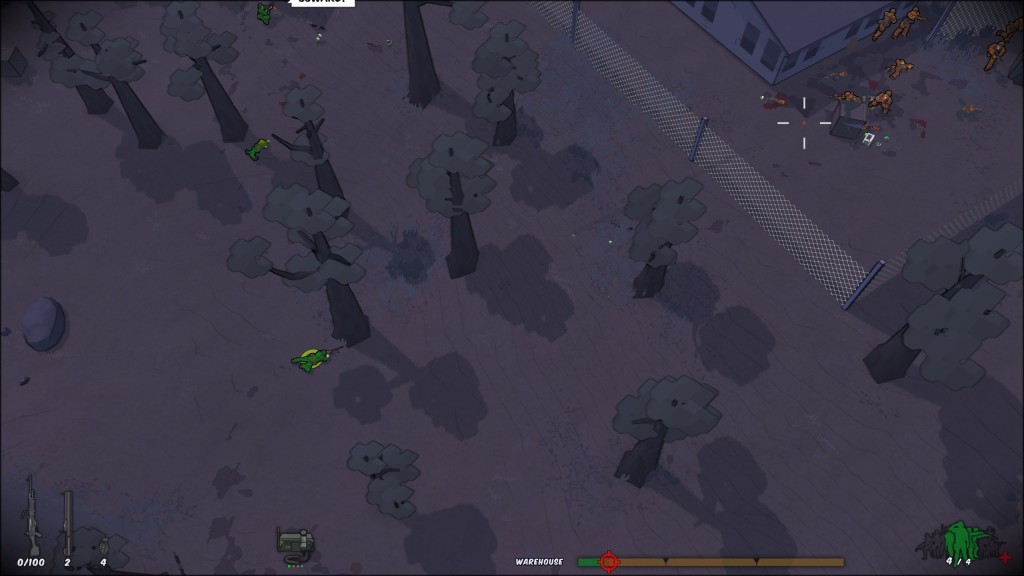 Aesthetically the game is a cartoony low-detail polygon style gig, although that’s certainly not a slight. The look is unique and you’re not going to be mistaking RWR for any other game any time soon, which I think is important as ensuring a distinction between cookie cutter shooters in interesting mechanics alone can often not be enough to convince some. The aesthetic is clean, functional and efficient in what it does, especially with the depiction of the battlefield altering as time goes on with muddy looking stretches and such. Ramping the corpse limit up to max also has the effect of making the true scale of the destruction involved in just one game very clear.

The system requirements are reasonable and could theoretically run on my Thinkpad X220 (my laptop benchmark), if I didn’t run into lib problems which I still need to look into fixing. The game is available for Windows, Mac and Linux although as I’ve stated there’s some lib problems that I’m running into, however on Windows the performance is fine, even with the graphics settings tweaked to make it look pretty. This is fairly close to a toaster game and would probably be laptop material, but I can’t test that yet, sorry. Overall though the game is a great deal of fun and the amount of content and gameplay on offer is easily enough to justify the price if this is your kind of thing. As stated earlier, my first playtest session turned out to be 5 hours almost entirely unintentionally so take from that what you will. Currently the game is £10.99 (approx $16.33) with a free demo available from the website allowing a legitimate try before you buy option, so if this does sound like you kind of thing then try out the demo as it will cost you nothing.

Running With Rifles on Steam: