Rocket League is a combination  of things that I’m not generally that interested in: cars and football, however that doesn’t stop from being utterly compelling. The thing is I got into Rocket League watching it, long before I actually started playing it myself. The game is a fantastic spectator game, producing some astonishing moments and a degree of tension that’s entirely unexpected. This could be the esport that finally draws me into the concept, it has depth but is quick and easy to follow and pickup. In this case it holds a significant advantage, other esports rely on relatively complex games that require a very intricate knowledge of the game just to fully enjoy the experience of watching. This sets quite a high bar for new players, a bar which Rocket League sets down a notch, allowing even a casual viewer to enjoy the experience.

The essence of Rocket League is a future sport involving rocket powered remote control cars, playing football (soccer) with a giant floaty ball in a large enclosed arena. This initially sounds reasonably dull, as it could be quite repetitive, however the cars can jump and flip in the air, adding that all important verticality to the game. The jumping and flipping operate on a system of a jump button, followed by a directional input to dictate the direction of the flip or roll. The end effect is a series of easy-to-do, but difficult-to-master car-based acrobatics, in a desperate bid to control the ball. Further to this is a boost system, which relies on pickups from certain elements of the pitch, meaning that a player must plan his routes carefully, choosing between boosting or the direct line to the ball. The result of this is a surprising amount of depth and tactics where it may not have been anticipated. 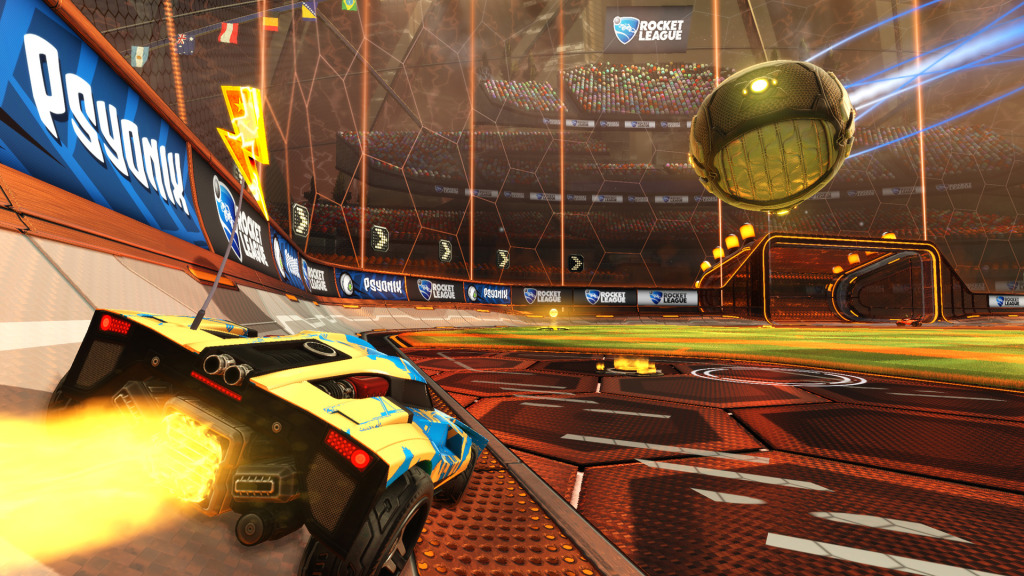 The games are generally expected to be three versus three, however combinations are possible up to the chaotic four versus four mode. The AI in Rocket League has gotten quite a reputation in that it can, at times, be rather good at the game. Lower difficulty AI is reasonably ok, with the occasional mistake and miss, however the higher difficulty AI can easily turn the tide of a match. They are capable of amazing feats, that human players would struggle with, however they also suck at other things like teamwork that human players excel at. My biggest gripe with the AI is the decision making of friendly AI and as a result the game is much more enjoyable with human players. Human players can play using local splitscreen, which is a really nice touch, or online multiplayer, or both.

The multiplayer is also cross platform, meaning that PC players can play with PS4 players, expanding the multiplayer base. Games are divided into regular and ranked, with regular games contributing to your overall experience level and ranked games contributing to your rank. A recent patch has started the ranked experience properly now, so it’s an interesting time to get in on the competitive side of the game. The experience level that I mention is how regular matchmaking works, experience points are gained for various actions during matches, playing matches and winning matches. These contribute to your experience pool, your level and your level rank. This is a good system, although not ideal, it’s still possible for someone who isn’t yet good at the game to get matched with those that are through just the sheer number of games played, essentially it might fail to take into account the different rates at which people learn the intricacies of the game.

Graphically the game looks good, it’s Unreal based so there’s already a strong foundation upon which to build, but they’ve done a good job building upon that base. The models and textures are nicely done giving the future sport feel, and the lighting and effects contribute further to this. The manner in which the rocket trails streak across the pitch, or the ball exploding in the goal, or the slow force field effect in the goal line, or even just the nice grass on the pitch… It’s a very well built, high quality visual experience which has no doubt contributed to its success. Not only is it pretty, but the visuals are also clear, making it easy for both players and spectators to clearly discern what’s happening. The sound design is much like the visual design: crisp, clear and quality. 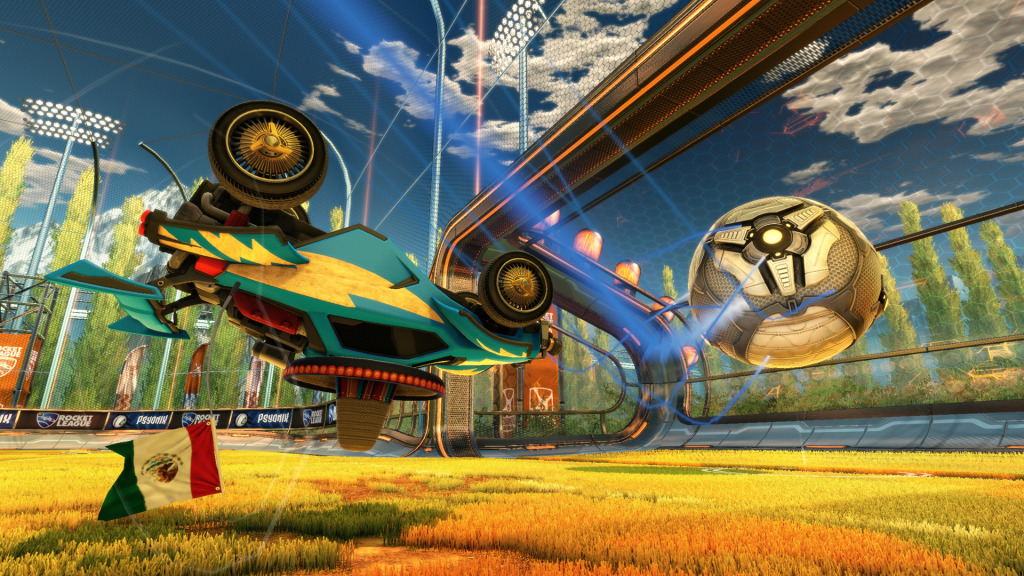 Another aspect that is related to the visuals is the customisation for your car, which can be unlocked as you play, allowing you to create the look you desire. This is also a source of additional revenue for the developers, as they can release paid DLC to the player base in the form of cosmetic items without the danger of unbalancing such a finely tuned game. This is a wise decision, as the competitive element of Rocket League is the future of the game, so to risk that future for short-term DLC revenue would be a foolish idea. The manner in which Psyonix have implemented DLC should see the game continue to thrive, whilst Psyonix can fund the future development and maintenance on cosmetic item sales, ideal.

Rocket League is currently available on PS4 and Windows, however Linux and OSX ports have been promised, and will very likely materialise as it appears Valve have gotten involved in the process. The system specifications are mid-range thanks to the game being reasonably pretty; this isn’t a monster of a game but it might also chug a little on laptop hardware. Pricing is reasonable at £15.00 (approx $24.00), especially considering the massive replayability potential. In conclusion, Rocket League is a great game, quick to pick up and difficult to master and it has huge potential in esport.