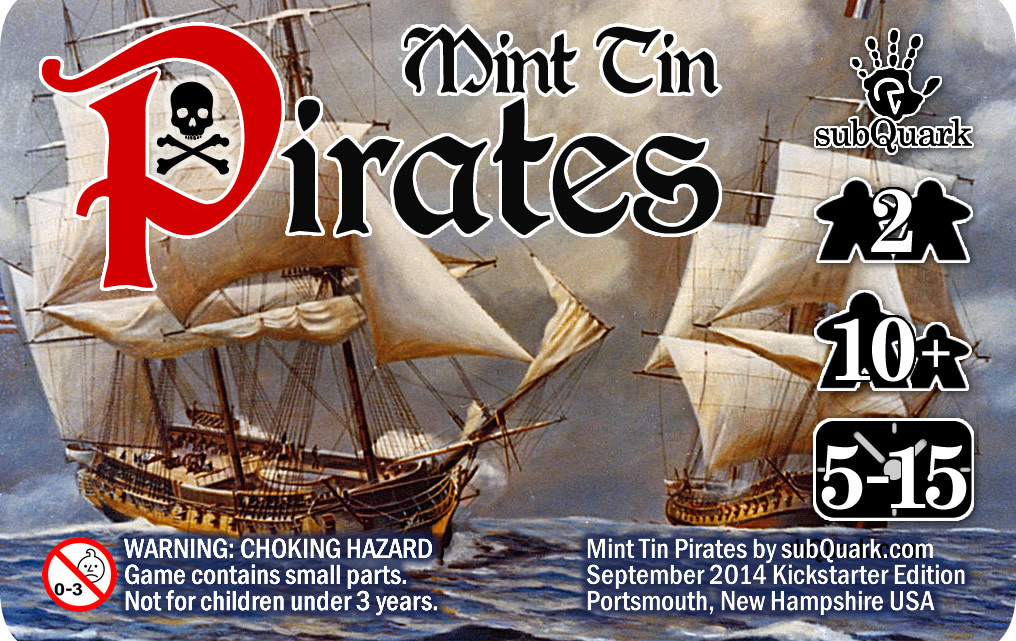 I’ve gotten into tabletop games a great deal more more recently and the variety, quality and fun is still a fresh novelty, so to have an Android incarnation of a tabletop game land in my inbox is rather serendipitous. I will make clear here that I was provided a review copy for this game. The game I’m looking at is an Android version of Mint Tin Pirates, one of a pair of physical microgames put on Kickstarter by David Miller and eventually reaching $18,296 of its $2,500 goal, a significant Kickstarter success. The Android port of Mint Tin Pirates is made by SlideWave, and strikes me as a very good choice of tabletop game to port. Mint Tin Pirates is, a reasonably quick experience, with games being relatively short but sweet. This is the ideal format for a mobile game where play sessions are generally quite short, but also benefit from good replayability as sessions may become unexpectedly longer. 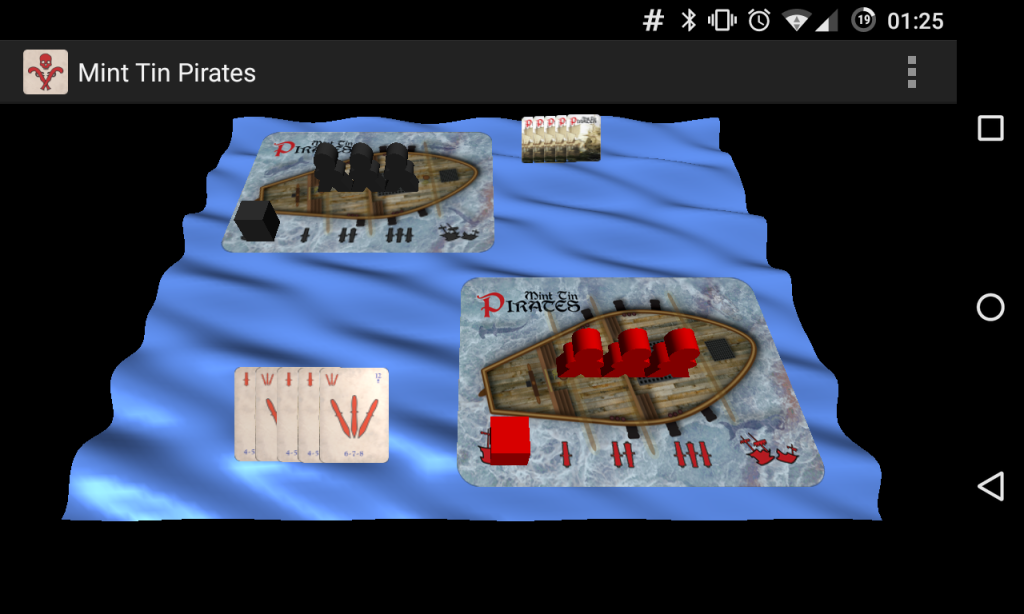 The game itself is relatively simple, with an interesting mix of luck and skill providing the challenge. The players each have a ship with three pirates and four hit points and a hand of five cards. These cards are action cards and actions are played with two matching cards and the outcome decided on by a double dice roll. Different actions will do different things, either killing pirates, damaging the ship or moving both dead and alive pirates around the table. Pair of Dice Paradise has a video that’s much better than I am at explaining the game, which I’ll link at the end of the article. When a player has no pirates left they are given one last chance with the ghost pirate, but if the ghost pirate is killed as well, then the player loses. This is also true of the ship taking enough damage that it runs out of hitpoints. There are other, more specific rules at certain times and I’m only giving the general outline. 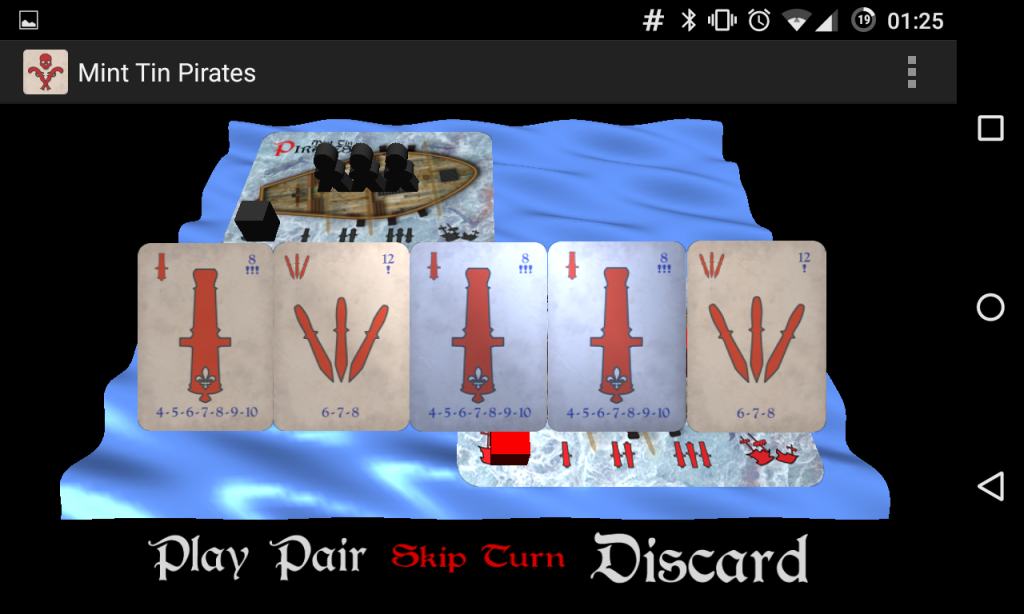 The app itself is a very good adaptation of the physical game: The game cards and elements are very clear and high quality, and the interface design is succinct and to the point. At no time do you feel that the interface is getting in the way of the game, which I feel is the risk with an adapted tabletop game. I’m not entirely sold on the wavy water effect and the moving ship cards. I can see why such a design choice was made, it is aesthetically pleasing and does give the game a little more energy, however I’d also quite like the option to have a stationary plain or faux-table background instead, mostly out of personal preference. Other than that though the actual process of playing the game is very painless, with card draws, turn progression and such happening automatically. The help menu includes copies of the rule cards that come with the physical game, giving a good overview of how things work. As a two player game adapted to a single player platform there’s been the necessary addition of AI, which is thankfully rather good but, not too good. I’m getting beaten occasionally but the element of luck ensures that I’m never steamrolled unfairly outside of where I might when playing against a person. What might be interesting is to try and reintroduce the fun of playing with another person, perhaps some form of hot-seat mode. There would no doubt be challenges involved in such an adaptation, but having a “Next Player” button where the device is handed to another person wouldn’t be beyond reason and would probably work in adding that multiplayer element back into the game. 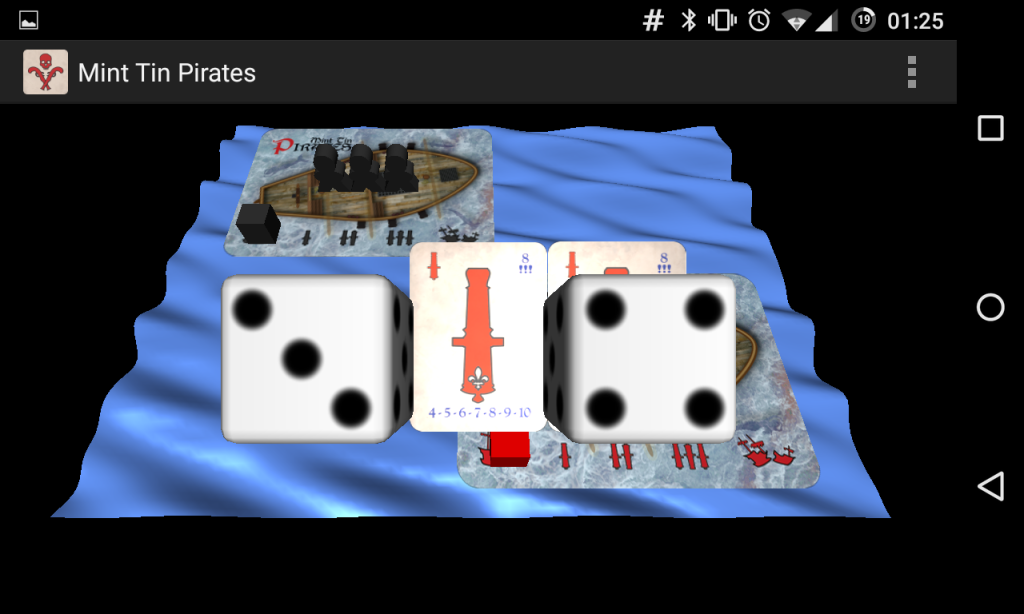 Currently the game is available on Google Play for £0.78 or about $1.00, and the same on itch.io, which is great value. This is a brilliantly fun game, and importantly for me, I don’t feel like playing it’s going to drain my battery in an hour. I’m very tempted to buy the physical version of the game as a result of playing this, which probably means that it’s giving a good impression. What I’d love to see is the other Mint Tin games (Mint Tin Aliens and, once released, Mint Tin Mini Apocalypse) adapted in a similar manner and at similar price points, as they’d make a great collection of little, quick and painless games on a phone or tablet. Besides minor niggles like the desire for a background animation/type toggle, I don’t have any qualms recommending the game. Currently the game is available on Android only, which is probably where it shines; that said a Windows, Mac and Linux port might be nice if possible and if the market is there, but I’d much rather have the other Mint Tin games on my phone first! I’m not sure about other mobile platforms, I’ve never been a massive fan of either iOS or Windows Phone, so I can’t really comment beyond the observation that on iOS the developer would probably have to sell quite a quantity to make back the extra Apple related cost and bullshit. Android feels like a good place for the moment and if SlideWave continue with this trend then I think they could be onto a winner. I tested it mostly on my Nexus 4 running a CyanogenMod 12.1 nightly (Android 5.1.1), but I also had equal success with an LG GPad 8.3 also running a CyanogenMod 12.1 nightly.

It’s worth noting that the Kickstarter for the next in the Mint Tin physical minigames: Mint Tin Mini Apocalypse is very close to ending, so maybe check that out for a chance to grab one and support continued development.