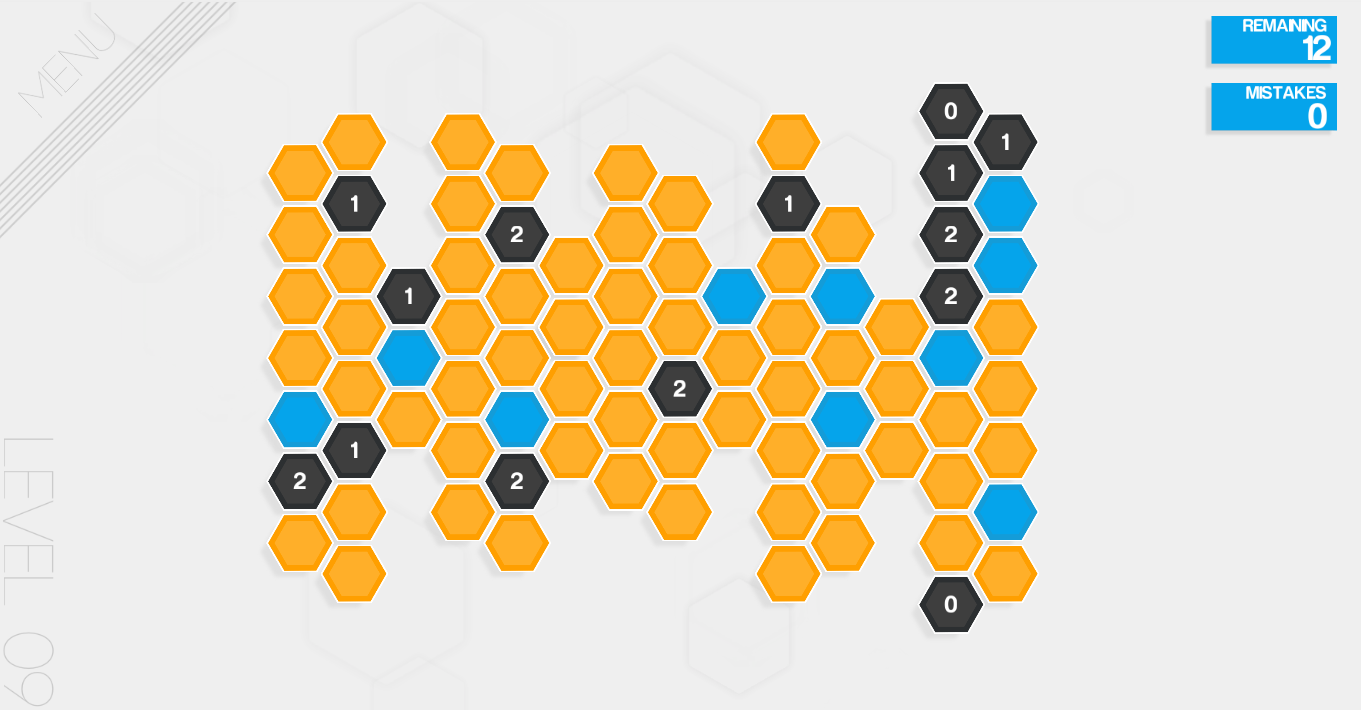 This review will be a cumulative review for the Hexcells series by Matthew Brown; Hexcells, Hexcells Plus and Hexcells Infinite. The gameplay is somewhat Minesweeper like however with the added twist of hexagons, because hexagons are the future (Crysis said so). Across the series the nature of the game remains much the same as Plus and Infinite represent level packs with some minor improvements to the player experience. Infinite does have the added bonus of a level generator which whilst it lacks the elegance of the hand-crafted levels will provide an unlimited number of addictive Hexcells levels. It’s scratched an itch for the last week where due to work I’ve had little time for more heavier or more time consuming gaming, which is really the ultimate draw.

The gameplay of Hexcells is much like Minesweeper in that any particular tile will show the number of positive tiles adjacent to it. Any tile that is not positive must be cancelled out, this is done with the right click whereas the selection of a positive tile is done with a left click. A pleasant option that has been included is the remapping of these controls, this was useful on the laptop as it allowed me to remap the right and left click actions to keyboard keys. This made the game far more playable on the laptop’s touchpad and huge kudos to the dev for including this option. This is the core of the gameplay and whilst it sounds basic it is often a relaxing and enjoyably paced puzzle game.

The levels, and there are many of them are well designed and provide sufficient challenge without being overly frustrating. This is really an ideal game to play on some downtime when you just want a little something to occupy your mind, but nothing too taxing. There are no time limits so it’s quite alright to take your time, the scoring is done through mistakes made and the later levels are unlocked with hexagons that are gained through completing levels free of mistakes. This is a nice little progression mechanic as well as encouraging level replays until a flawless solution is found.

The aesthetic of Hexcells is clean and minimalist with little cruft or unnecessary padding. It almost feels like a mobile game at times as it often follows many of the simplification design tropes that are common in that sphere. In this particular case this is not necessarily a bad thing as the game is fairly minimalist in its nature and there is little point in overcomplicating the aesthetic beyond what is pragmatic. In fact this would actually be a good candidate for a mobile release thanks to the relative simplicity of the game and the clean interface.

In short there isn’t much more to be said about the Hexcells series; they are a series of very well made puzzle games that offer a large number of levels to challenge your deductive and logical reasoning. This is much like minesweeper, with many of the same draws as Minesweeper however with a hexagonal twist, clean interface and large selection of handcrafted levels on offer. It’s certainly something that’s worth having installed on a machine just for those little Minesweeper and Solitaire moments. It’s also in a good position as a game to have installed on any machine as all of the Hexcells games are available for Windows, Mac and Linux and if purchased through the Humble store can offer DRM-free installers that wouldn’t even require Steam to be present or running to play them. This in addition to some very low system requirements means that just about any x86/x86_64 machine will be able to run it, making this a very good toaster game.

Pricing is pretty reasonable as Hexcells and Hexcells Plus are available for $3.00 (approx £1.85) and Infinite is available for $5.00 (approx £3.08) through the Humble widget on the developers website. As ever this is the purchasing method that I would recommend as it provides a Steam key as well as DRM-free downloads for each game. This pricing places each game at around the price of a cup of coffee per game, certainly less than the price of a pint. The nature of the series actually means that the first Hexcells purchase, at $3.00 represents a very low price experiment as to whether this is your cup of tea, for the price of a cup of coffee. The series is still available on Steam for those with an aversion to other purchase methods however the conversion rate is not quite as favourable and may add a few pennies to the purchases.