With a weekend off I delved into my list of unplayed games (it’s a long list) and pulled free from that list a game that I’ve had for some time: Door Kickers. Door Kickers is a top-down pausable real time SWAT CQC tactics game. The player has a team and the ability to issue orders and pathing to that team in order to complete one of a variety of mission types. This isn’t too different from Breach and Clear, which I’ve covered previously, although I’d be reluctant to say that one was better or worse than other. The SWAT series call backs are clear here, which is great because I adored SWAT 4. What I can state off the bat is the dedication of the development team to the game, this isn’t a fire-and-forget game that’s gone gold and been forgotten. Door Kickers instead receives regular updates, including free updates and whole new campaigns courtesy of the developers which is something that they quite honestly could have charged for. I love seeing this kind of developer, they’re gamers making games for other gamers and that is a brilliant thing. Take their stance on DRM stated on the website for example: “We’d rather spend resources on the actual game and we don’t like to impose restrictions on our paying customers.” Now this isn’t a unique attitude to Killhouse Games, but it is the kind of attitude that shows what kind of developers they are: good ones.

The game itself is of the gritty and realistic strategy game type, as opposed to the abstracted action of the likes of Frozen Synapse. Door Kickers is also hard, like properly hard. It takes no prisoners and will demand regular restarts in order to get the best rating possible, requiring a refining of tactics and loadout throughout the process. The tactical system is interesting, rather than the “right-click to straight line” way point system that Breach and Clear utilises, Door Kickers allows the drawing of a trooper’s path through the map. This difference, combined with the pausable real-time over turn-based system make Door Kickers an interesting experience and actually playable in real-time, not that you’ll want to. You’re going to want to use that pause button because being able to adapt multiple trooper’s orders and pathing simultaneously is invaluable and absolutely necessary later on. Door Kickers uses a star system to differentiate between a mission done well and a mission only barely completed. This post-mission analysis includes a series of determining factors and whilst not as detailed as SWAT 4’s debriefings, it still provides ample reason to keep retrying a level until you’re within the par time with no troopers down. Getting these stars enables you to use them to buy different types of equipment and firearms allowing loadout customisation with increasingly deadly or appropriate gear. This progression is game-wide so it’s possible to build good set of gear on single missions before entering into the campaigns.

The missions available are divided between single missions and campaigns and come in a variety of flavours from hostage rescue to drug busts to simple sweep and kill. The single missions can be played in any order whilst the campaigns are short groups of missions that enforce continuity in terms of wounded or lost troopers. In addition to these is a random mission generator that will take existing maps and throw a random mission together and then the scenario editor with Steam Workshop integration opening map making to the community. This tallies up to an admirable amount of content, especially considering the replayability would already be high thanks to loadout and tactical customisation. Not only does the community (and you) have the ability to create and upload new missions but the developers also release extra campaigns in free updates, as I’ve said before this is the way to do this business. In addition to the star system of levelling mentioned earlier, your squad will also level as you complete missions with them, gradually improving their skills. Then in addition to this there are points earned which can be spent on squad-level improvements to weapon draw, reaction time and such. All in all, a game that could suffer from being a series of detached and distinct missions has a reasonable amount of progression, but without the caveat of feeling like a system that was once free to play. 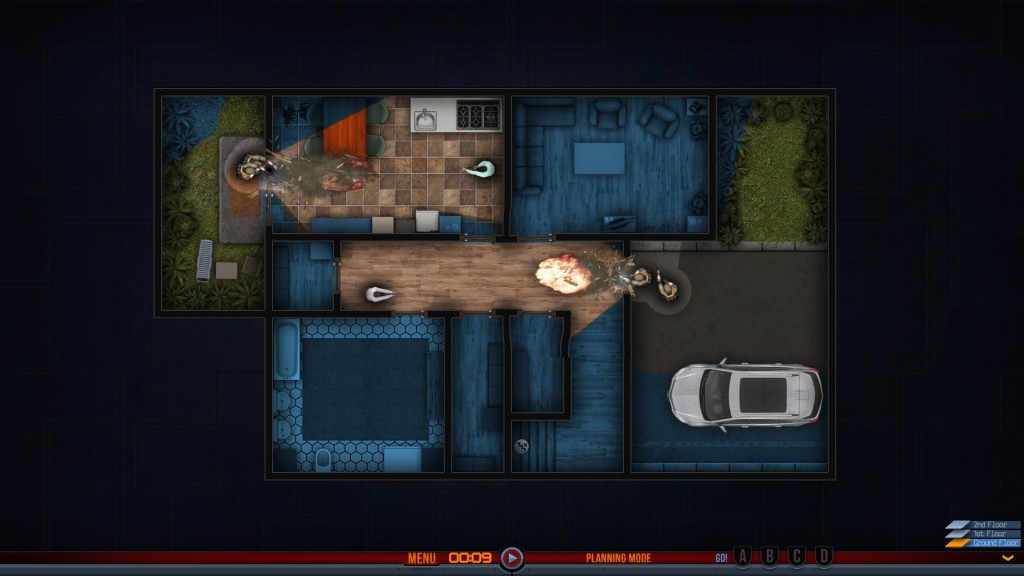 With regards to the troopers themselves I have mentioned their levelling and gear, but not in any detail. The troopers come in a handful of varieties: pointman, assaulter, breacher, stealth and shield. These categories are reasonably self explanatory and dictate the type of weapons and equipment that particular trooper can have. There are base weapons for each type available but you’ll soon want to spend those hard earned stars on some new and shiny guns. Personally I’ve got a squad equipped mostly with the SG1 classic, the P90 PDW. The weapon characteristics are well simulated, for example my squad of P90s can draw and point very quickly in confined spaces due to the compact and short design of the PDW, they have an impressive 50 round magazine which limits the reload requirements and can penetrate body armour well thanks to that 5.7mm miniature assault rifle round. The P90 is a good weapon for this, besides the limited stopping power that is. There is a very good variety of weapons with the predictable classics such as the old M4/M1911 combo but also some other varied weapons, I believe I saw a very expensive Israeli bullpup in the menu. The armour and gear is detailed although it could have been more-so, but really that’s me being picky and wanting more customisation. The body armour system offers a variety of vest options, ranging from very lightweight low-threat vests to the really heavy ones with the groin attachments and most things in between. The gear provides the selection of SWAT gear that you’d expect to see: flashbangs, stingers, door probes, hammers, breaching charges, etc. The gear and armour loadout will alter the speed and dexterity of your troopers, so there are some circumstances where speed is preferred over protection and vice versa. All of these provide the player the ability to level and equip a squad of their own, customised to their own personal play style and tactical preferences.

The system requirements for Door Kickers are not excessive, in fact in my laptop test with my trusty Thinkpad X220 (Debian Jessie) the game ran absolutely fine, which means that most non-toaster laptops and systems in general should be capable of handling things just fine. This is great news as Door Kickers is absolutely a game of lunch breaks, just do a mission or two on the laptop rather than a dedicated play session, although those are still fun. Currently the game is available on Windows, Mac and Linux with mobile versions on iOS and Android currently in development. This is great news as the lunch break friendly nature of the game should translate over to tablets very well, with some interface modifications that is. The game is currently $20.00 from the website, providing a Steam key and a DRM free download but it’s also available from Steam direct, the Humble Store, and GoG. Personally I went for the Humble Store option over getting it directly from the website as it allows me to better manage my game library, but it’s really up to you. For the price asked, the game is absolutely worth the cost, the sheer amount of content provided by the developer alone is enormous, then consider the addition of the random mission generator, existing community maps and an easy to use mission creator and you’ve got all the tactical content you’ll ever need. Just try to avoid playing so much that you walk into a room in real life and noting hard cover, soft cover and arcs of fire.