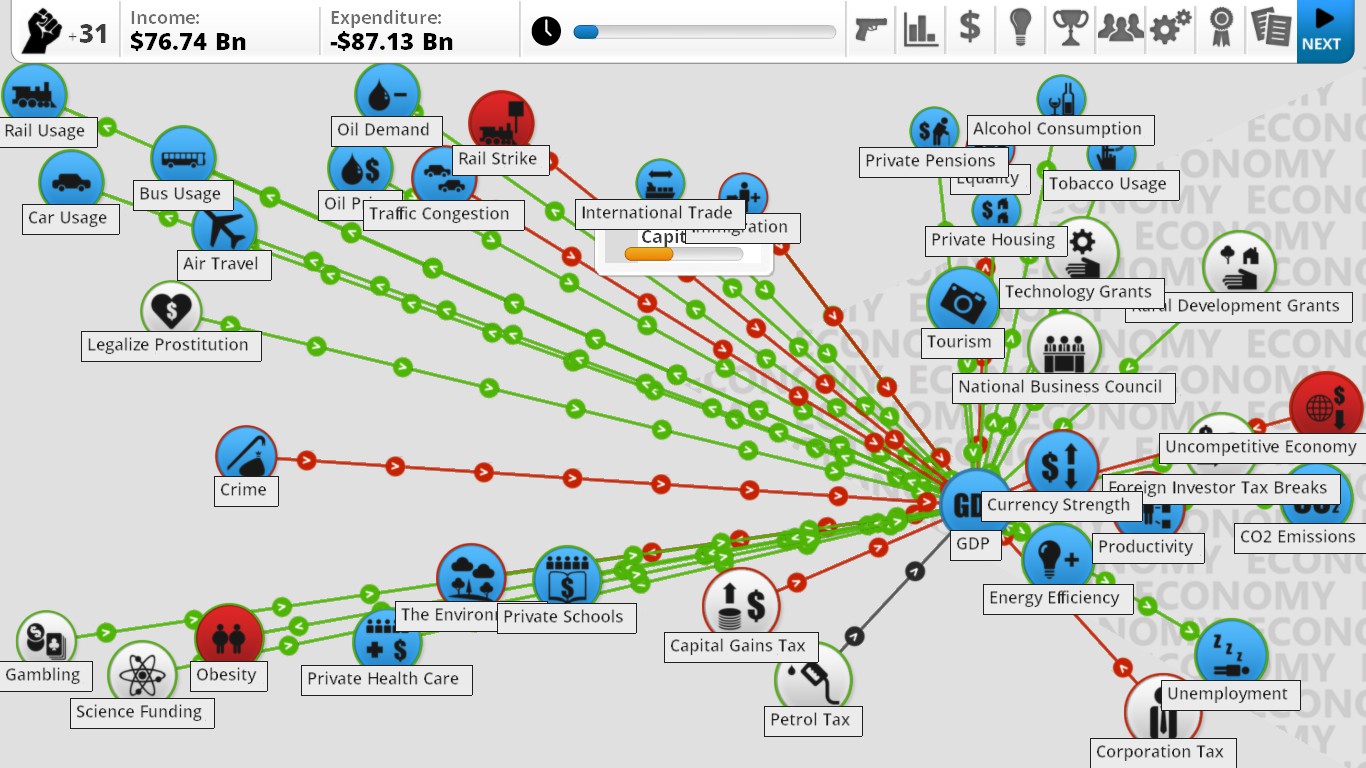 I’ve not played the prior two iterations of the Democracy games so this is my first venture into the series. Democracy 3 from Positech Games is a political simulator placing the player in the shoes of a democratically elected leader whom must attempt to tackle whatever problems your chosen nation may have whilst also concerning yourself with keeping the electorate happy and ensuring your re-election. Behind the interface there’s quite a significant amount of processing happening as the electorate is modelled in a reasonable amount of detail. Whilst it will never be as complex or multi-faceted as the real thing the Venn diagram approach to assigning voters differing groups and interests does a fair job of creating a dynamic and responsive electorate. The interface itself is distinctive with issues and policies showing as circular icons on a screen divided into appropriate groupings. Something I will comment on this early on is the sheer support the game receives; with two official expansions already released and ample modding support. The two official expansions; Social Engineering and Extremism each add a variety of different policy options at their respective ends of the scale, thus enhancing the gameplay and giving the player the option to travel as far down their desired political route as they please. The modding support is good with Steam Workshop integration and readily available materials resulting in a multitude of differing mods and the potential for your own personal modding if you are so inclined.

As I have mentioned the main screen shows the policies and effects as circular icons which then have interlinking lines showing how each is likely to interact with the other when changes are made. This is an odd way of displaying the information and I will admit that having gotten quite used to many an example of menu driven interfaces it took me a little while to acclimatise. Once you’ve gotten used to the interface though and garnered a reasonable understanding of what the iconography represents it is fairly quick and easy to get to where you need to go. The policies that I mention are introduced or changed through the use of ‘political capital’. This mechanic bypasses the simulation of any form of parliament, congress or house of representatives. It’s reasonable to assert that as a game entitled Democracy 3 a simulation of these elements of the democratic process of government would be a fairly logical inclusion. I would perhaps argue though that adding that extra layer would make the game almost impossible and therefore considerably less fun as instead of actually being able to change policy using political capital and watching the effects there’s every chance that a simulated opposition controlled congress could potentially limit any and all attempts at progressive change. Whilst the all-powerful-leader spending political capital approach is somewhat unrealistic, I’d say it is fairly necessary in order to keep the game a game and not a simulation of petty inter-party squabbles driven by greed or power. As a game that sets out with certain objectives Democracy 3 is effective and importantly, it’s fun. There’s real satisfaction to be had in modifying policies in just the right way to achieve your goals. The last game I played for example resolved around massive science and education funding coupled with the dismantling of almost all religious elements in the nation. The end result of this was not pretty as my aggressive counter-religious policies were enacted whilst the religious population was still relatively high and my sweeping liberalisation of various other national policies allowed religious extremists the freedom to assassinate me.

This does not necessarily have to happen as with a careful hand it is quite possible to bring in big changes slowly as the opposition support base shrinks according to policy changes. My major downfall on that particular failed game was an over enthusiasm towards wiping out any religious sentiment that may exist in the nation (and the global economic crash didn’t help). The simulation of economics is interesting as the various changes made to differing policies will change the economics of the situation as much as the social shifts. Angering the rich with high taxes will lead them to travel elsewhere whilst allowing them a nice fluffy cloud chair in a tax haven will have its own downsides. This is really the key to the simulation model underpinning the whole of Democracy 3; interconnectedness. Everything in the game is connected to everything else and that is really a very cool idea. Whilst it may not be the ultra-realistic simulation of the democratic process that some would like it is a fun game with some very entertaining yet interesting mechanics under the hood.

Aesthetically the game hides the multi-faceted simulation layer underneath a relatively simple and bold GUI. This interface takes a short time to acclimatise to as it differs somewhat from the menu-driven norms that one would expect with this genre, however once you’ve grasped exactly how the various screens and graphs interlink and work it is quick and easy to get to where you want to go. The colour palate is a crisp white and blue with ample use of bold primary colours to help differentiation and many of the screens are adorned with additional art-work related to their contents. In short then; whilst the interface design is a little unorthodox in places it isn’t half bad and is certainly functional once you’ve grasped the iconography and various screens. Sound wise the game has an appropriately political-drama-esque soundtrack, although again as per usual I’ve taken to muting it in favour of other sound/music.

Compatibility wise Democracy 3 shines; full native support on Windows, Mac and Linux and I’ve got to say I wish I’d added this to the Toaster Tallya couple of weeks back as it should run on just about anything thanks to it not relying on 3D graphics. The game will set you back £19.14 (approx $32.30) direct from the Positech website, £18.99 (approx $32.06) from Steam and £14.80 (approx $24.99) from GOG.com. The expansions, of which there are two will cost an additional £4.00 (approx $6.75) each. These are not particularly low prices and I will admit, the reason I’m reviewing it quite so late after release is because I wanted to wait until it hit sale price. My recommendation is to watch some Youtube gameplay videos of the game (Quill18 specifically) and then decide whether the game is going to engage you enough to warrant full price. If not then perhaps wait for a Steam sale.