I read the Rock Paper Shotgun review of this game the other day and the reviewer constantly struggled with the fact that this game feels more like a reaction to Simcity 2013 than a game in its own right, I on the other hand am perfectly fine with whatever connotations may arise. In spite of the concrete EA-shaped lump dragging it down Simcity 2013 had some reasonable potential and there were aspects of it that were enjoyable. The thought of a Simcity-but-not-Simcity release which took the good bits of a modern Simcity, cut off the nasty EA-shaped concrete block and added in the mod-friendly and relative openness of an indie studio and I’m pretty much on-board with just the idea. I’m also aware that I promised Homeworld this week, and I really did want to but I still haven’t sat down with it long enough. If I’m honest if I hadn’t screwed over my sleep schedule playing 7 hours straight of Cities: Skylines by accident then I probably wouldn’t be in a position to review anything today. As it is though it’s a fairly happy accident as I don’t generally play a bad game for 7 hours without break, and I will find time to play Homeworld and review it… eventually.

Cities: Skylines is very much a Simcity inspired game and could easily (and deservingly) be rebranded into the series along with the likes of Simcity 2000, Simcity 3000 and Simcity 4 without as much as a blink of the eye. The gameplay revolves around constructing and managing a city in real-time, although as the mayor you cannot directly control non-publicly owned aspects and as such must panda to the requirements of the private citizens and companies that choose to reside in your wonderful metropolis. This is the core of the Simcity and the Cities: Skylines gameplay: managing your city and judging taxation, expenditure and service provision balance. That’s more of the maintenance element though, there is also the goal of designing the metropolitan space and transportation network. To give an example from my recent city I had some severe problems with traffic as I expanded the city without correctly adapting the transportation and road structure. The result was actually a fairly organic city, something Cities: Skylines does well, but with some nasty repercussions with regards to service provision. 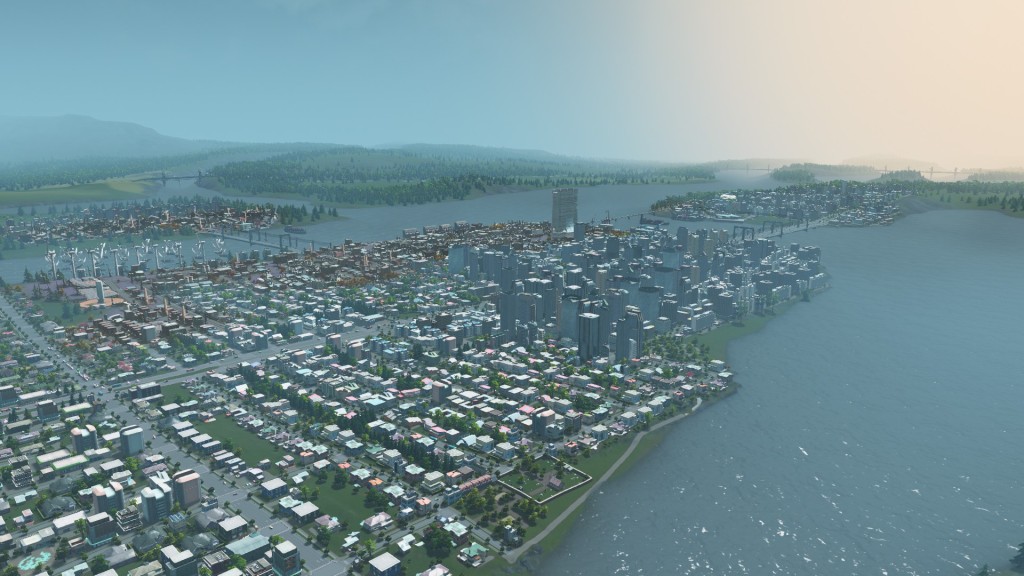 Many of the regular services are present: the likes of power, water, health care, education, policing and such however there is also the slightly unexpected and for lack of a better description herse provision. The requirement to deal with the dead makes a great dead of sense and I went about first filling graveyards and then somewhat unceremoniously piling up crematoriums in the refuse incinerator district (what?), but this was seemingly not enough. I believe it may have been the traffic but in my city, once I reached a certain population I’d have a sudden boom where an entire generation would snuff it. This boom would trigger the “dead person awaiting collection” debuff in large swathes of the city which would then trigger the “abandoned building” problem which snowballs thanks to Broken Window Theory (which the devs seem to consider a very fast acting and thusly exponential problem). This is potentially one of the largest and most unexpected results of poor road planning but it is a good illustration of how complexly intertwined the many many aspects simulated in Cities: Skylines are, even if it did turn my game into Dawn of the Dead. 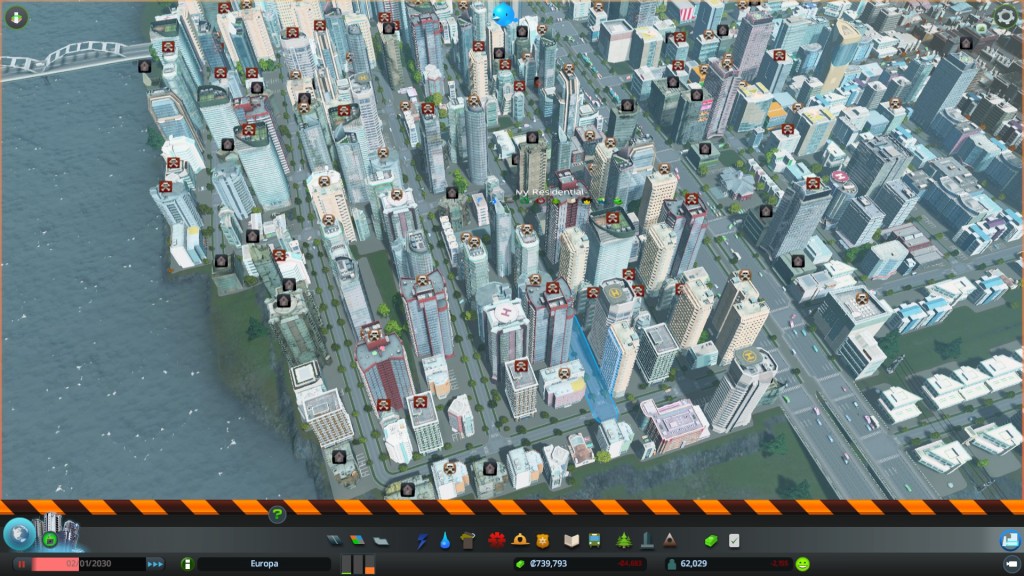 On the whole the game feels like a worthy successor to Simcity 4 and a strong take-away lesson for EA and Maxis. The mechanics for city growth are brilliantly done, starting with a reasonable tile of land (or the entire Simcity 2013 plot) and then allowing the expansion of the city into neighbouring tiles as you grow. This is brilliant and is actually something that I forgot or didn’t utilise properly in my last city. The last city builder that I played was the Simcity 2013 release and many of the bad design habits that I picked up from that are proving difficult to do away with, the resulting city is a tightly compact high density and traffic filled urban jungle. Funnily enough the city does still work, besides the dead people problem cycle it still manages to reach 80,000 population despite being crammed in too tight. This is another aspect of Cities: Skylines that shines compared to Simcity 2013,  the traffic simulation is far more forgiving and less prone to descending into gridlock at the drop of a hat. In fact the whole level and depth of simulation is astonishing and all without the need to magical mythical cloud processing run on EA bullshit, unicorn poop and the tortured souls of genuinely creative and talented developers. Instead Colossal Order and publisher Paradox have taken genuinely creative and talented developers and allowed them to make a damn fine game, game development done right people! 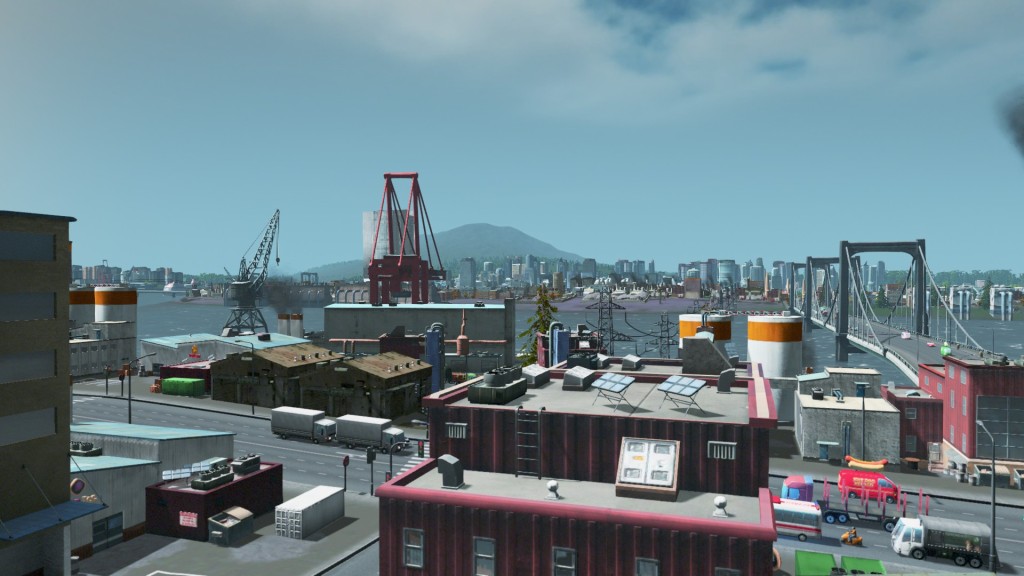 Really Cities: Skylines is not a derivative product of Simcity 2013 but neither should it be judged in isolation from it, instead it should be considered the Simcity 4 successor that Simcity 2013 should have been. This could well have been the game that Maxis might have made without the twitching, boney, dessicated finger of EA pushing the game towards shareholder satisfaction rather than player enjoyment. (Although the chances are that an EA finger is actually well manicured and proudly displays one of those ugly corporate twat football rings). There is evidence of the smaller studio nature of Colossal Order, especially in asset variety, however this is easily overshadowed by the rest of the game and in fact is made somewhat irrelevant by the readily available modding and customisation tools which should fill the Steam Workshop with player-made asset packs in no time. This openness to modding is again one of the key differentiators between an indie like Colossal Order and the likes of EA, whom made it their business to stomp on modding for the sake of extra revenue in expansion packs. In short, Cities: Skylines is really good and if have even the slightest interest in city builders it’s worth picking up.

The game is available for Windows, Mac and Linux for £22.99 (approx $35.00). That’s right, the price is $35.00 and it’s a simultaneous day-one release on all three platforms, this really is the city builder done right. There’s no arbitrary server connections or logins, although the game is Steam-based due to heavily utilising the Steam Workshop. But then Steam always has the Offline Mode which should allow you to quite happily Cities: Skylines with a crappy/no connection. (Also no Origin). The game is available from the Paradox Store, Steam and the Humble Store for around the same price in each and all providing a Steam key. There is more to Cities: Skylines, a couple of very minor niggles and a whole lot more good stuff but I feel I’ve made my point: It’s a really good game and you should absolutely buy it for the $35.00 price tag, if only to shit on EA and show them that an honest indie can make more money from a reasonably priced excellent game than a money-grubbing corporate scumfest can make from an over-priced broken one.