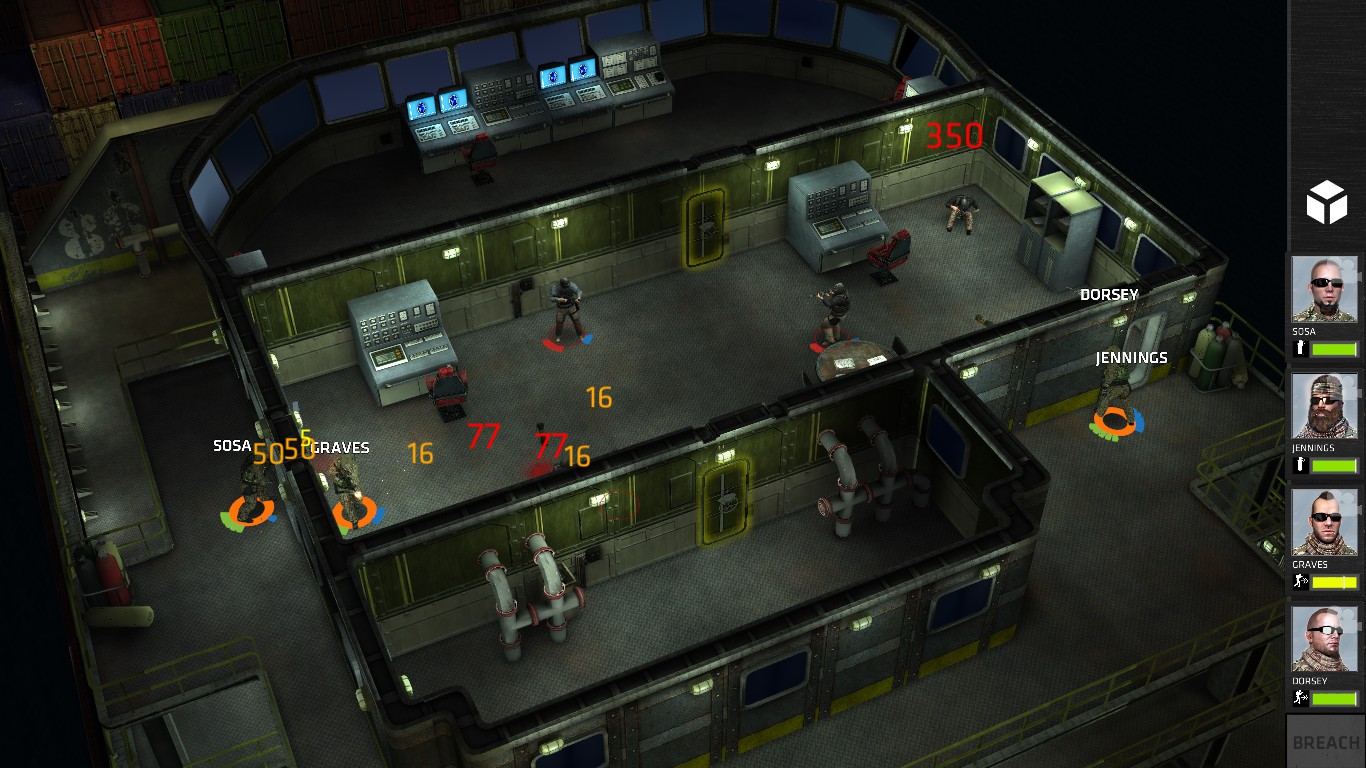 I swear I need to lay off the tactical shooters at some point soon; I can’t walk down the street without seeing hard cover, soft cover, arcs of fire and squad movement patterns… Last week it was Xenonauts and Arma3 and this week I’ve been playing the interesting little title Breach & Clear (B&C). B&C is a turn-based tactical squad-based shooter with a contemporary warfare twist. Originally this was a mobile game although now it is available on both mobile platforms and Windows, Mac and Linux. This introduces some potential dismay as mobile ports don’t have the finest reputation among the PC gaming community, although as I will discuss later B&C does manage to avoid most of the common pitfalls. In terms of theme and gameplay I would describe B&C as a mix of the older Rainbow Six games and Frozen Synapse. (Aside: Rainbow Six went seriously downhill after 3).

The player is first prompted to choose a team from a selection of real world special forces and counter terrorist squads, each of which will start will differing starting stats. Personally I went with US Army Special Forces just because it reminded me of Rainbow Six. The fireteam can then be individually customised in name, appearance and importantly role. The differing roles offer specific stat bonuses as well as skills which can be used in missions. For example the Weapons Sergeant class has the “Suppressing Fire” skill which has that team member do exactly that whilst standing still, whilst the Direct Action class has the “Sprint” ability which will place them up close and personal at the expense of being unable to fire. Combine these classes together and the potential in character levelling and class choice becomes evident. I must admit that I do enjoy this form of levelling, although it does rely a little on grinding and replaying missions. Then again the replayability of missions isn’t too bad as a timer will give you a personal time to attempt to beat and the hostile spawns are semi-random. (Much like Rainbow Six).

In addition to the levelling of soldiers through experience there are other variables such as gear and weapons. The gear offers a variety of both vanity and functional items with a relatively reasonable balance between the two although it does lean towards the mobile roots a little. The items are purchasable with the ingame currency that is acquired through completing missions (and in the mobile version; micro-transactions) which are the mobile roots I mentioned. The vanity items are fairly pointless in terms of gameplay although their very low price reflects that and I can’t really complain about having the choice. The gear includes helmets and armour of various types and levels of encumberment and protection. This is quite an interesting mechanic and something I’m particularly chuffed at, these don’t necessarily unlock with purchase but instead will represent a single inventory item which can be then equipped by a squad member. The same is also true of the weapons, although these are unlocked for purchase as you complete missions. The weapons can also be upgraded/modified with a weapon customisation system ranging from triggers to optics. The end result of this is that in addition to the unit customisation, class choice, class levelling and pre-baked stats and individual soldier can be equipped as light or heavily in equipment and weaponry as you please or as the situation requires.

My gripe would be that whilst the cost of weaponry and equipment scales up with level the earnings from completed missions don’t as quickly, which means that at the stage I’m at it will take four well completed missions before I can purchase a single higher level rifle. That being said I’m not sure how much of an advantage that would offer over my FN SCAR Mk.17s. Which actually leads me onto another interesting facet of the game; a surprising amount of licensed weapons and equipment. Weapons are generally named (so few slightly modified names) and there is genuine equipment from real world companies like Crye Precision, whom are behind the Multicam pattern currently being implemented by the US military. (Also the closely related MTP pattern being introduced in the UK military). I’m not sure how important all of that really is but it does lend the game a certain air of authenticity.

The tactical element is closer to Frozen Synapse than the likes of Xenonauts and XCom. Whilst the units are limited in how far they can move per turn, which are actually played out simultaneously much like in Frozen Synapse. This is by no means a bad thing as it requires the player to anticipate enemy movement rather than just responding to their current static position. The gameplay itself is very satisfying as movement relies on a rather intuitive waypoint system, allowing you to create a path and insert waypoints whereupon the unit’s direct of aim will change. Frozen Synapse does much the same but it’s also a little less intuitive. The downfall of this compared to the Xenonauts/XCom style time units is the inability to perform actions like grenade throws and movement in the same turn. This isn’t much of a big deal as the game doesn’t really rely too heavily on it and still remains a very satisfying experience. In short the mobile origins of the gameplay translate quite well onto PC and whilst certain unlock based progression behaviour remains, it’s not implemented too badly. The overall amount of content is very good with to my count seven sets of five missions, each of which supports all three game modes; Terrorist Hunt, Bomb Defusal and Escape Plan.

The overall aesthetic is good but not stellar, perhaps better than expected of a mobile port. The interface design is logical and has been modified to the PC well, although the mobile version remains well suited to that particular platform. It would have been nice to see more hotkeys in the PC port although that’s just a small gripe.

The game is available on Windows, Mac, Linux, Android and iOS although you will get a different experience on the x86 platforms compared to the mobile platforms with differences in content, micro-transactions and interface. Personally I’d recommend picking it up for Windows, Mac and Linux as that version is better supported, avoids micro-transactions and has more content to offer. The system requirements are low thanks to the game’s mobile origins so that shouldn’t be too much of a concern. Pricing-wise the game is £10.99 (approx $18.10) on Steam as well as the Humble Store. Although the Humble Store will net you DRM-free downloads for all of those platforms and a Steam key for the game. The Android version is selling for £2.37 (approx $3.90) and the iOS version is selling for £1.21 (approx $1.99), although both of these versions are inferior and micro-transaction supported.

Breach and Clear on the Humble Store (Recommended):

Breach and Clear on Steam:

Breach and Clear on Google Play:

Breach on Clear on the-mess-that-is-itunes: