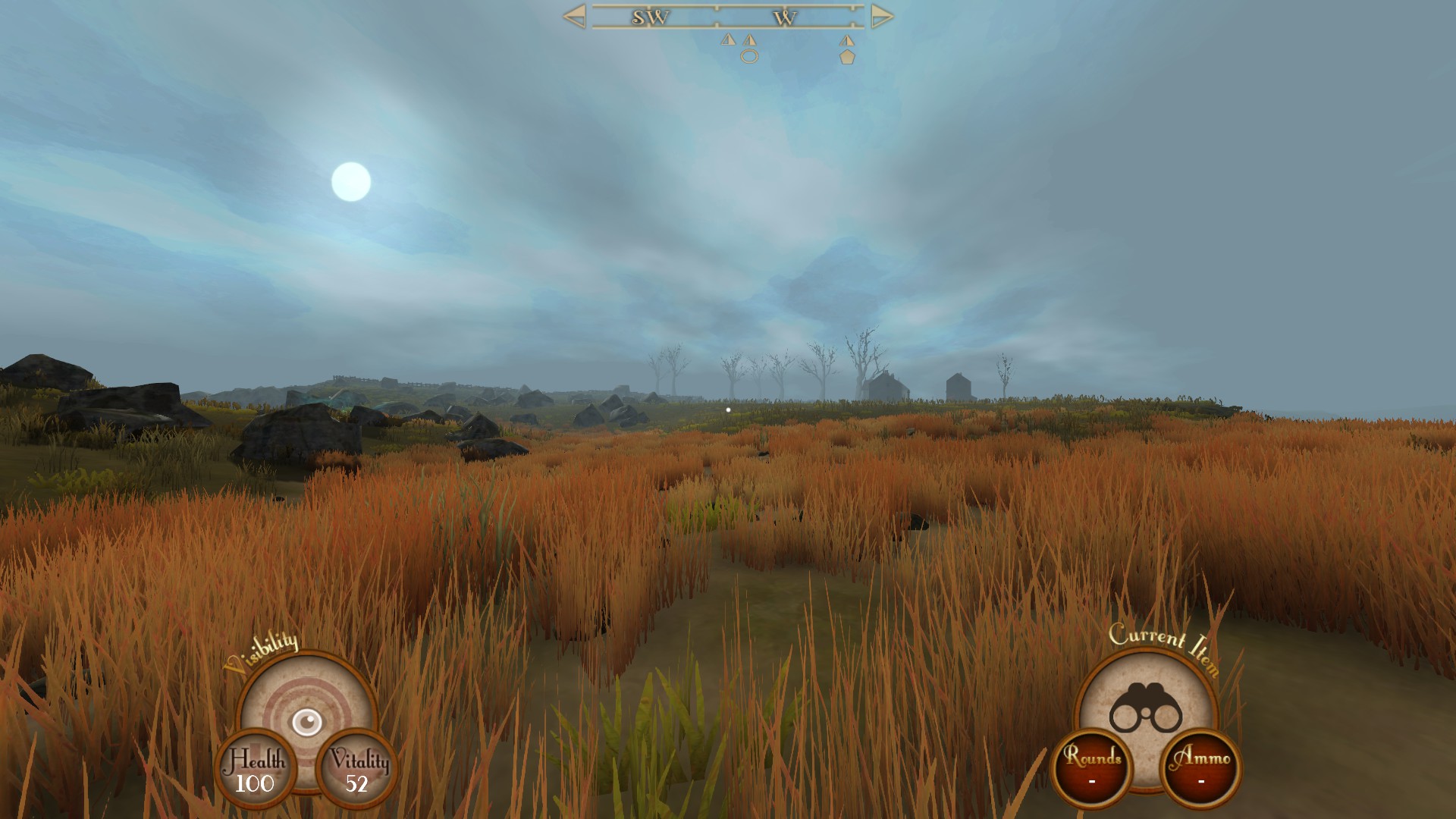 I last looked at Sir, You Are Being Hunted (SYABH) back in November of last year whilst it was in Early Access. This first person sneaky, collecty, tactical survive-em-up from Jim Rossignol and company has advanced significantly since I last looked at it whilst also retaining the core experience. The story goes that you, a gentleman/lady have been stranded on a series of British themed islands by a malfunctioning machine of sorts. It is up to you to travel around these said islands gathering parts of the machine in order to rebuild it and escape. The catch is that these islands are inhabited by gentlemanly robots out for a pleasant bit of hunting, and you’re the prey. The premise is quite odd and yet simultaneously very compelling, especially when combined with the well thought out and now well honed mechanics that make up the core of the gameplay experience. I’ve always had high hopes for this game hence why I jumped on it on Kickstarter. It had everything that made it potentially very good; an experienced development team, a team lead known as a writer for one of the finest PC gaming publications on the net, a responsive development model and a clearly defined scope for the final release. Somewhat spoiling the rest of this review I will tell you now that these aspects have in fact created a game that is very very good and a thoroughly enjoyable experience. This is a big relief for the part of me that is adamant that Early Access and especially Kickstarter can really work well in stripping the need for pesky publishers from gaming and still produce a final product of brilliant quality. At this point there have been some significant horror stories bourne from the Kickstarter boom and it’s a relief to be able to show that this is not an ultimately doomed model of funding and that it can, in fact, produce tangible results meeting or exceeding the original promises.

Much of the core gameplay is much as it was in the development build that I previewed, but with a little more polish. The stealth and combat remains as strong as ever, with some variables having been tweaked in order to balance it a little. For example. I’m fairly sure small wooded copses have had their sneak potential buffed a little so as to make them a little fairer than before. Movement and inventory management also seem to be improved, movement speed and noise is nicely balanced so that whilst crouched movement is slow, it’s not frustratingly so. Small touches like the lean show good play testing or response to player feedback, among other things. One thing I would like to see the is a non-drag item management somewhat like shift-click in Minecraft. The new additions since I last played are mostly new enemy types which include some interesting new behaviours. One enemy type, the scarecrow has Slenderman like behaviour and I seriously dislike those damned things, they have been the end of me on more than one occasion. I will avoid spoiling other additions to the enemy pool but I will assure you that they are interesting, varied and challenging in their mechanics. New items and traps have also been added, along with some refinement to those that were already in the game. These are brilliant in the options that they give to the player in how they approach a situation in which they are outgunned and outnumbered, ie most situations in the game. Objects from simple stones and bottles to the alarm clock, toy train or beartrap can all be used to coerce and draw enemies into traps or away from areas. This is really where the game shines as the emergent gameplay brought about by the procedural generation creates scenarios that often require the careful use of stealth and tactics to solve. Other additions since my preview focus on new biomes including mountains, industrial and fens. These biomes each have their own different traits and combine with the new items to further the potential for new and interesting scenarios. In short the new additions are primarily content and this add yet more replayability potential to an already expansive indie game.

I previously compared this to the STALKER games and I stand by that claim as much of the same dynamic living world elements are shared by both. SYABH is a limited compared a STALKER game but this is a consequence of it being a much smaller game type and to be fair it knows the scope that it was aiming for. I will admit the idea of factions or some form of aggressive wildlife hostile to the robots and you would be a fine addition and continue to produce fun and interesting interactions, especially on larger maps. However this is something that was never really within the design spec and I can’t really hold it against them that they haven’t such features, I can just hope for something of the sort in a sequel. Speaking of features; whilst the game has reached complete status the developers have actually promised the neat and much requested addition of multiplayer support. This could have some significant potential in expanding the replayability of the game even more and the prospect of co-op is really very tantalising.

The aesthetic is the same as it was in the development build I previewed in that “the graphical fidelity of the game is exactly what it needs to be, the environments are as grim as necessary, the atmosphere never lets up for a second and the enemies are appropriately comical and threatening in equal measure.” One little addition that I will make is that the game looks a hell of a lot better with anti-aliasing and for the life of me I couldn’t find a setting in game for this. So I recommend going into your respective graphics driver control panel and forcing anti-aliasing or FXAA for a superior experience if your machine can handle it. The overall atmosphere of the game with the varying weather and day/night cycle is brilliant and cannot be faulted as it not only adds to the gameplay experience but also to the overall immersion. The sound design also remains awesome, although this time I left the music on and I have to say that I get a weird Bladerunner vibe from it, which is unexpected but far from a bad thing.

As before the game is available on Windows, Mac and Linux and the system requirements are not particularly frightening; Core2 Duo, 2GB RAM and a ShaderModel3 compatible graphics card. This is a low end gaming desktop or mid-range laptop spec and should be achievable for most unless you’re using a toaster, in which case take a peek at the last two articles I wrote for some awesome games to play on that underpowered little thing! Price wise the game is normally $20.00 (approx £12.00) from the Humble Widget on the game page however for a limited time (especially after this gets published) it’s on sale with a few bucks off. It’s also available on Steam but as ever I’d recommend the Humble Widget, you folks know why by now. In short this is a very well crafted game with a dynamic and replayable experience that will provide hours of entertainment far beyond the cost of the title and I highly recommend it.