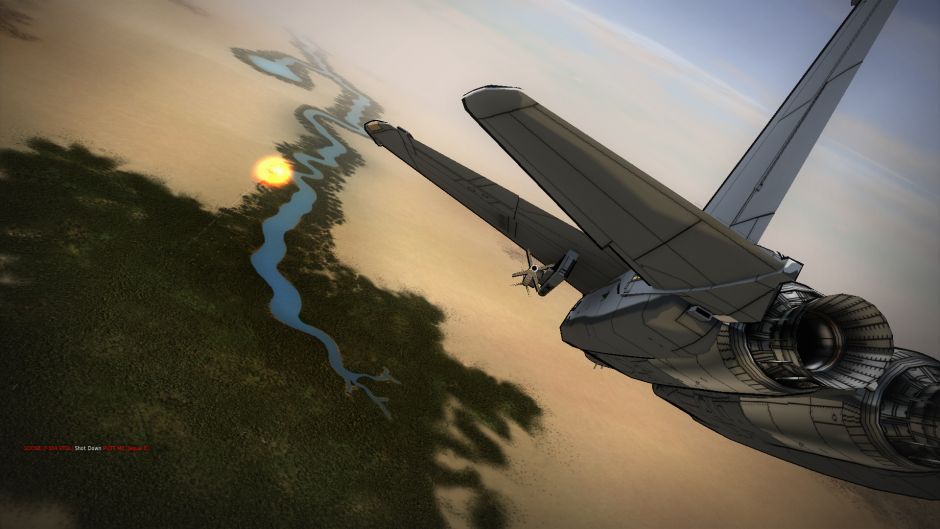 The tradition of the older Ace Combat games has gone to the dogs somewhat. Whilst modern Ace Combat games do exist they lack the character and flavour that their predecessors managed to achieve. It’s worth being honest that the finest Ace Combat game I’ve ever played was Ace Combat 3: Electrosphere, which was an astonishingly good mix of not-so-near-future tech and plot with solid Ace Combat gameplay. Vector Thrust is an indie air combat game that is more in line with the older Ace Combat games, taking the arcadey air combat mechanics and sprinkling in a wide plane and weapon selection from a variety of real world and experimental designs. This is then coupled with an interesting cartoony style to create an experience that is fun in all the right ways and uniquely attractive.

The gameplay, much like the Ace Combat games from which it takes inspiration is an arcade-style air combat gig. There are restrictions of ammo, but they are a far cry from any realistic sim, loading you out with 40 or so air to air missiles and expecting some pretty fierce dog-fighting in the place of long-range guided missile stand-offs. This is a game that was necessary on the PC, which has thus far lacked the vast majority of the Ace Combat games. The realistic simulator market is thriving on the PC with the likes of DCS providing all of the ultra-realistic air combat you could desire, however for when you’re looking for a lighter alternative that won’t provide challenge and check-list following complexity from the very outset there isn’t a huge selection. This is where I feel Vector Thrust provides a valuable service in providing such a experience to the PC crowd.

Being early-access Vector Thrust isn’t finished, however in spite of this fact it is very playable. There are a variety of game-modes including campaigns and challenges which can be played to varying degrees of success in order to unlock other air-craft. This system from what I’ve gathered may not be complete, or it lacked intuition as each campaign would ring-fence its gains and not provide plane unlocks elsewhere. I’m not sure how that’s going to play out in the full game however it would be nice for the progression system to be developed a little into something clearer and more concrete. This isn’t to say that the progression system within the campaigns is broken, nay it is very satisfying unlocking newer aircraft with which to decimate countless enemies. The challenges too, a series of seemingly dynamically generated tasks can vary a little in the difficulty level, provide a great deal of entertainment. The death-match mode is particularly fun, even against bots: The last I played proved to be a half-hour of intense close quarters dogfighting involving missiles and guns in tandem. The death-match mode provides more than one life, whereupon I was forced to bail and lose a life in order to re-arm as I had a single opponent remaining and had expended all of my missiles long ago and all cannon ammunition in a handful of last ditch attempts to down him.

The control scheme is logical and worked very well (after configuration) on both an XBox360 pad and a Thrustmaster T.Flight Hotas X. It was a superior experience on the Hotas admittedly although there was a certain nostalgia to playing such a title with a controller. Aesthetically the game shines as the unique to the genre cartoon appearance offsets the inherent problem with indie studios attempting graphically intense games. This is essentially a ‘get out of of jail free/cheap’ card for the studio in terms of creating a graphically pleasing yet functional game: They can dedicate a certain amount of man-power towards creating art assets without having to succumb to triple-A levels of department-level dedication, something that would probably be impossible for an indie studio anyway. The end-result is far from negative, as the unique-to-the-genre art-style differentiates the game from its distant hyper-realistic simulator cousins and therefore sets the expectations accordingly. This is probably a surprisingly important aspect of the aesthetic, gamers can often be very fickle creatures; very fast to judge on little more than the briefest glimpse and had Vector Thrust attempted to marry this genre with any other aesthetic they would likely have found a barrage of negative reviews from less-than-stellar examples of humanity.

I normally discuss the development model earlier in the article than this, however in this case I felt it better to do so with context for the state of the game. Vector Thrust is, like many of the games I look at, early-access and it has been for quite sometime. Seemingly from a very early point in development the game could be found on Desura, which is where I first saw it although I admit that I skipped it at that point as development progress didn’t quite match the marked asking price. This is an ideal example of early-access working well for a title; the relatively small platform upon which it launched probably provided some of the necessary funds for continued development whilst also building a dedicated community of testers and followers. When the game eventually hit Steam it was in a fairly good state for play and provided enough bang-per-buck to actually make sense as a purchase. This is likely the ideal model for early-access, a slower and quieter method than throwing a barely functional prototype to the fickle dogs of Steam and then attempting to filter out the crap that the users are capable of from genuine useful feedback. Perhaps like Rimworld it is better to follower a smaller and more dedicated early-access model.

System requirements have been kept pretty reasonable thanks to the stylised aesthetic offsetting the need for graphical fidelity or photorealism. We’re looking at a generic 1GHz processor claim, 1GB RAM and a DirectX 9.0c compatible card. Although I’ve not tried it out yet due to it being Windows only I would be tempted to say that this could be a laptop game. A controller of some sort is also something that if it isn’t a bare-essential is highly recommended. Price-wise the game is available on Steam and Desura for around £10.99 (approx $17.66). This is a pretty good price for the game as it is at the moment, especially if you’re already an established fan of the Ace Combat series. Overall, it’s worth remembering that the game is in constant development and evolution however it is very playable as is and seems to just be getting better.