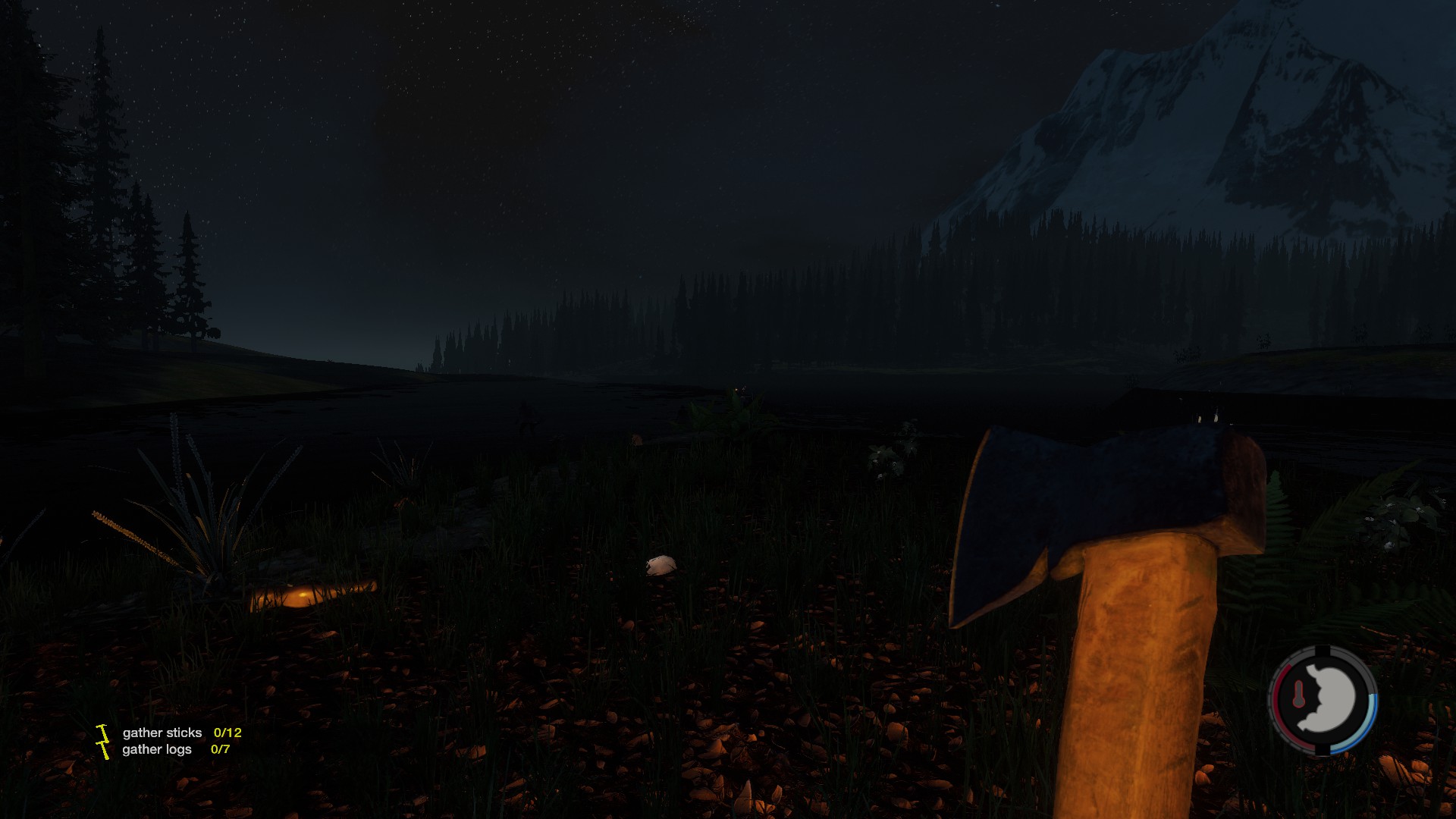 The Forest had been teased a few times in past months and whilst it looked very pretty I was a little sceptical. Now however the Alpha Early Access release is available for the public and it is very interesting indeed. Based around the Lost scenario of being in a plane crash on a remote island. Unlike Lost there are only two known survivors; yourself and a small child, presumably your offspring that is taken from you by the island’s natives. The natives are not the friendliest of folk and I’ll talk about that more later, but for now let’s consider them a worrying combination of curiosity and aggression. As far as how developed the game is; it certainly deserves the alpha tag. Whilst many of the fundamentals are functional there are still fairly severe bugs, from things like an infinite supply of seagulls to being flung 20 meters into the air when attempting to crouch into a shelter. If buggy Early Access games are not your bag then I’d recommend waiting until this is finished or at least in beta before picking it up. There’s a lot of potential here and for an indie game that is early in development it looks great and plays ok.

The gameplay is a somewhat stripped down survival style although this may be down to the early stage in development and my recent excursions into the undoubtedly more complex Cataclysm:DDA. Your character has hunger and health, with the former helping recovery of the latter. Food doesn’t seem to be particularly scarce as the wildlife have a bit of a Dodo complex going on when it comes to their treatment of humans. Evidently the cannibals have been so busy eating each other that they’ve forgotten about the abundant wildlife on the island which at this point will happily skip right up to you having seen you murder ten of their kind. Nowhere is this more evident than in the seagull bug whereupon an infinitely respawning pool of gulls will land on specific point one after another, although the gulls cannot be eaten so this is certainly a bug rather than an exploit. Hopefully they will work on the animal AI as well as adding variety and some difficulty to the available foodstuffs, it would be nice to have a bit of hunger induced panic hunting or scavenging. As it is the real difficulty is not in the surviving itself but in the natives.

The natives are an unpleasant cannibalistic bunch, they live in a village somewhere on the island and will very quickly track you down if you hang around too long. The animation, modelling and AI of the cannibals are quite extraordinary actually. They move just too quickly for comfort and rather than being straight up hostile they will often approach with curiosity and then dart off up a tree. Your first encounter is very unsettling even if you’re expecting them, often you’ll see one standing at the tree-line before darting off up a tree. Gradually they will become braver or gain enough reinforcements to feel confident enough to attack. The combat is brutal and the cannibals can take a frankly unfair amount of beating with both the starting axe and the wood axe. Take on more than two of these suckers at once and you’ve got a severe problem, normally followed by death or rather non-death. The first defeat you have will not result in death but instead will ditch you in the dark in a cave filled with… well I’ll let you find out, but needless to say that cave is not easy to escape. Once you have escaped though you will have a second chance and potentially more equipment gathered during your impromptu spelunking holiday. Building a camp is useful and fire will keep the natives at bay to a small degree. Traps can be constructed but can’t seem to be reset and seemingly the best way of keeping those pesky cannibals at bay is to build an effigy from the severed remains of their friends, gruesome I know but it seems to be the only language they understand. I’ve yet to last a significant enough time to see the natives fully driven off, the time I got closest I got to this I was killed by a bug before I could complete the effigy. As I said before, the environmental survival is not all that difficult, it is the natives that present an almost unbalanced challenge. I’m hoping that as the game evolves they can find a more reasonable balance, although I really hope they don’t change the cannibals too much because the presence that they’ve moulded with them is quite eerie.

Aesthetically the game is extremely impressive. The island is well modelled and simulated with a responsive dynamic environment; moving plants and the like and some very fancy lighting. This is a testament to the power that indie developers have available to them with toolkits such as Unity and the now indie friendly Cryengine. Whilst not Crysis 3 standard graphics, The Forest is still very impressive even at this stage of development. The atmosphere afforded by the dynamic weather, time of day and lighting really adds to the experience in this case. The cave that I mentioned earlier is eerie to the extreme when lit by only a small lighter and nothing else. One of my camps was further inland (avoiding the natives) and although I hit an invisible wall due to this being a development version the change in environment was pronounced. I’m not sure if the constant rain was intentional, but it certainly gave a different experience. This isn’t an experience that can’t be gotten from other games but The Forest does seem to be on the right track. The sound design matches the visual design and both work in conjunction with the overall situation to create an immersive experience. At the moment this immersion is occasionally broken by development bugs like the wildlife or death crouching but eventually that should clear up.

Overall I’d say that unless you’re really very interested you should wait at least until The Forest hits beta release. What is there now is a good indication for the future of the game, if not a little brutal. I personally hope that the developers extend the environmental survival aspects and perhaps scale back on the currently pervasive cannibals. Perhaps the night could belong to the cannibals and the day to survivability, with the day-night cycle balanced accordingly. Currently the game is available on Windows only with no indication of other platforms, although considering the Unity base it probably wouldn’t be out of the question. The system requirements are relatively high, looking at a mid-range gaming PC as a reasonable standard.

The Forest on Steam: