Survival games have been going strong for some time now, to the extent that we’re seeing survival hybrids as the genre spreads beyond itself, much like RPG elements became prevalent in other genres. The result of this is a significant number of games appearing, but many of them still relatively early in development as the developers attempt to get the game out of the door in time to ride the wave of popularity. Whilst this has worked out well in some cases, there have been a few high profile flops which have both harmed the name of the survival genre and done quite significant damage to the idea of Early Access. Stranded Deep is among the more realism based survival games, essentially CastAway – The Game, Stranded Deep is set on a series of very small tropical islands probably somewhere in the Pacific. This setting is interesting for a survival game and is no-where near as unforgiving an environment as many, in fact that act of just surviving isn’t all that difficult.

The game world is essentially a large/infinite procedurally generated world of tropical islands, all about the same size. It would be nice to have the occasional larger island as the current world generation seems to have a maximum island size of perhaps a football pitch. With that in mind though, I feel that the entire balance of the game is built around these very small islands as the limited resources on any particular island demands exploration. My first major resource problem was, of all things, rocks. This was a little frustrating as I ran out of rocks fairly quickly and found that I could not “make” rocks by hitting rocks with other rocks. Instead the landscape rocks are just for show and cannot be used in crafting. Either way, this great rock famine led to a lot of paddling out to a nearby island and despite my best efforts to maintain a reasonably logical bearing I still got lost when attempting to return to my original island. There is a compass in the game, which when found or scavenged from a wrecked boat would solve this problem however I haven’t managed to find one yet. What undermines this slightly is the fact that even when stuck on a distant island away from the original with all of its mod-cons (like my lighter!), it’s still not too much of a challenge to survive. Coconuts and potato plants can provide water and food a plenty even without cooking, although it’s not an interesting diet. Ironically despite being a survival game, it’s not that difficult to just “survive”, instead much of the progression seems to be based around quality of life improvements like fire for cooked crab or fish or huts to keep dry. This could be temporary though as half of the challenge of survival games in Early Access is balancing them. It will be interesting to see where the developers take the game in that respect. 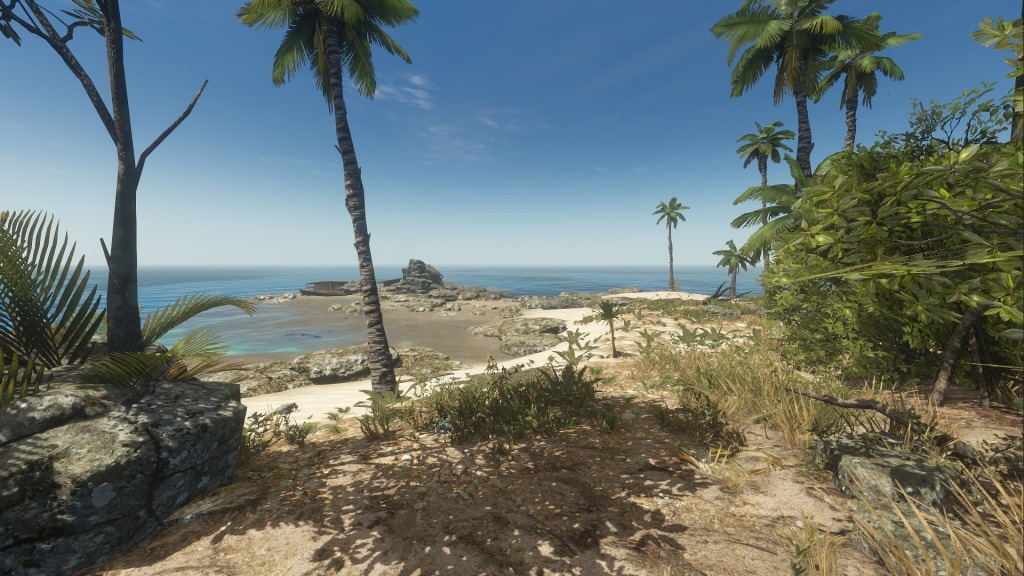 The world itself is actually rather rich in terms of content and atmosphere. There are animals, mostly aquatic which can be caught and eaten or alternatively which may attempt to eat you… yes there are sharks. The sharks introduce that necessary element of pressure when attempting to explore, especially when looking around the various wrecks scattered around. In that sense I’m glad for their presence, I’ve not attempted killing one yet but I’m hoping that they are appropriately deadly and difficult to kill. This is an interesting move and it makes the whole exploration process much more rewarding as you manage to not only navigate successfully but also avoided having your legs bitten off by a shark. It reminds me of a diving game during these sections with the breath holding, first person swimming and shark threat and that’s by no means a bad thing. 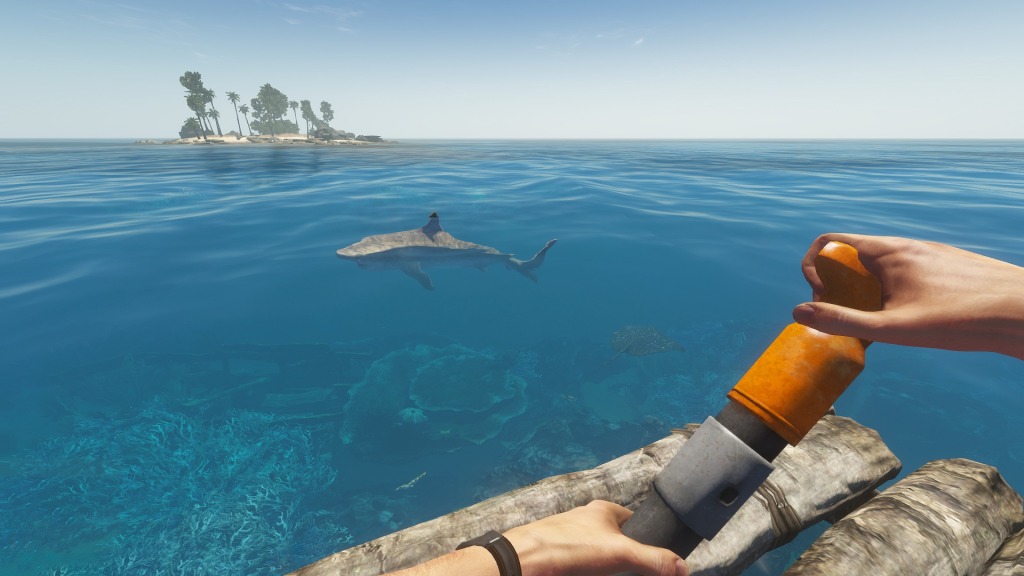 The current development status on the game shows that the team is moving over to Unity 5, which is a good idea in general. They also state that the other two main requested features are co-op and larger islands. Co-op gameplay would be amazing although it would seem that whilst it is being worked on, it is not a main goal. Larger islands are also being worked on and I’m pretty psyched about that, however I can imagine that it would require quite a degree of rebalancing once that gets implemented, as at the moment the requirement for surviving and thriving is exploration to other islands. I feel though that the inclusion of slightly larger islands would make the game feel more authentic and the environment less like an artificial series of very similarly sized small islands. It will be interesting to see exactly where Beam Team take the game as Early Access continues. Luckily this is a genre of game that can thrive in Early Access as the gameplay isn’t reliant on pre-made story but instead can be replayed with many different results. That said, the potential is what sells this game as the current content can be burned through reasonably quick. In most other situations that would seem like a reason to steer clear, but with the developers actively updating the game that potential seems like it could well bear fruit.

I can’t really write this review without mentioning the graphics: they are spectacular. This really is a fantastic looking depiction of something amounting to a tropical paradise. They are taking full advantage of the fancy effects that Unity offers nowadays with brilliant lighting and features such as ambient occlusion working in harmony with very pretty water effects and nicely textured models. In short, whilst The Forest is a pretty game and does a very good job of making an appealing tropical paradise, Stranded Deep does it a little better.

System requirements aren’t too heavy but I’d recommend a mid-range gaming rig in order to get the most out of the game’s prettiness. The Steam recommended specs match this, recommending 4GB memory and an Nvidia GTX600 card, which is about mid-range. Currently the game costs £10.99 (approx $17.30) and it has been known to go below that in sales. This is a tough recommendation as I personally rather enjoy it and if anything the environment and graphics alone give this a great deal of potential as an enjoyable walking simulator with the survival elements only improving the experience. I would say that if you are pre-disposed towards survival games and aren’t afraid of a bit of Early Access then it’s probably worth picking up.