Space Engine is more of an engine than a game, in that there is no explicit gamey features but instead a massive universe to explore at your will. The essence of Space Engine is that combining real world data and procedural generation the developer has created an awesomely massive universe filled with galaxies which are in turn filled with stars which are in turn surrounded by planets, moons and asteroids. The sheer scale is fantastic and just exploring what the procedural generation has produced is enough to satisfy my requirements for many hours of entertainment. The development funding model for Space Engine is interesting too with the developer providing the game free of charge and surviving on donations; the Dwarf Fortress model. This is fantastic news as far as this review goes because you can literally finish reading this, download Space Engine and try it! (And then donate because it’s amazing and worth it). 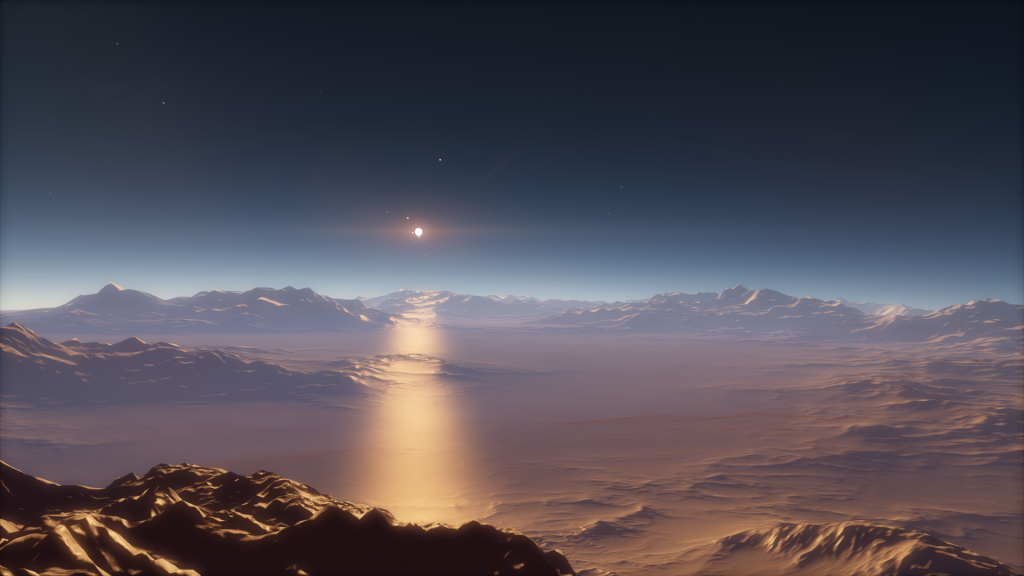 The best way to describe Space Engine is really as a combination of the universe simulator Celestia and the terrain generator Terragen. It also reminds me very much of the old DOS-based game Noctis IV which also presented the player with a procedural universe and the ability to land on planets. It represents what I believe the procedural generation in Elite: Dangerous wishes it could be in that Space Engine makes Elite’s universe seem simplified by comparison. The manner in which the universe is generated is quite fantastic as it essentially follows a series of rules closely modelled on reality to generate a digital universe with a scale ranging from a small hill-side to galactic superclusters. The terrain generation is based upon the physical properties of the object as well as gravitational tidal forces, temperature, proximity to stars and other bodies, etc. This level of detail can produce some fantastically varied worlds, like the tidally locked planet that does support life but only at the permanent day/night terminator where the temperature is a balance between the scorched day side and the frozen night side. The life is not limited to extremophiles with the possibility for complex multicellular life under the correct conditions, and in some surprisingly terran scenarios. One of my favourite places at the moment is a fantastic oceanic moon which is in a tidally locked orbit around its gas giant parent but still experiences day/night cycles for the binary stars its parent orbits. The tidally locked orbit means that wherever you sit on the surface the parent gas giant never moves, but instead hovers in the sky whilst the binary stars create bright, pleasant days and gorgeous sunsets. The whole system is also located within a dense star cluster making the night sky packed with stars. This cherry on top of this is a comfortable 23-24℃ temperature on the surface, making this moon an amazing choice for an ocean cruise as travelling around the moon would alter the day/night length and move the parent body in the sky, I’m thinking Fhloston Paradise from The Fifth Element. I used this as a screensaver for a bit as finding a nice point where the parent and sunset were visible and cranking up the simulation speed created something very appealing to watch. Another sight I found was a golden sunset with scattered lines as both the rings and their shadows of an oceanic moon interfered with the light from the setting sun. (Next image) 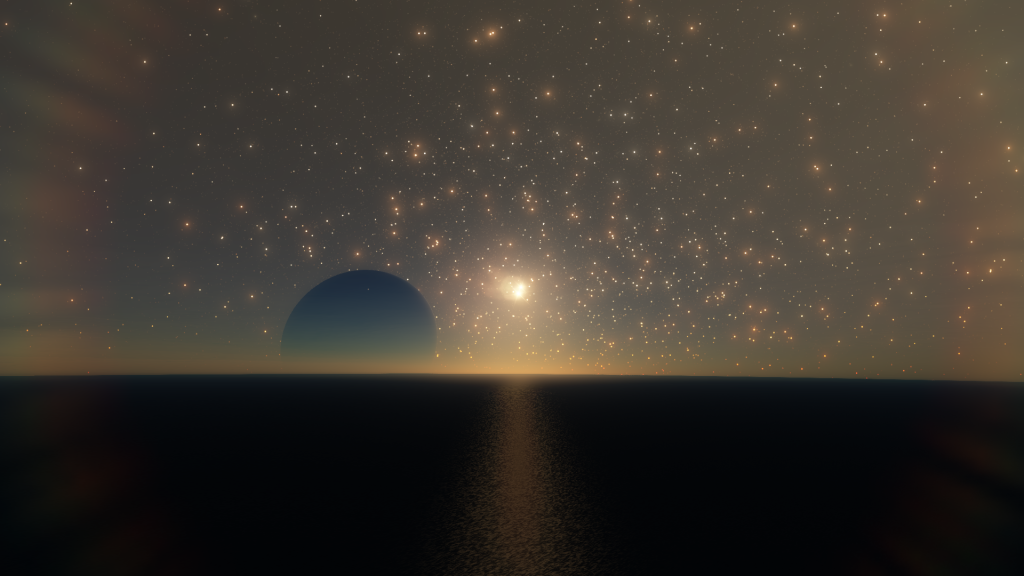 These are just a couple of examples of many that I’ve found personally and millions that are possible within the engine. The game is a screenshot frenzy as the fantastic lighting simulation, terrain generation and atmospheric modelling combine with the celestial circumstances that produced them. Sometimes the celestial generation can create some oddball systems with unreasonable ring systems or other such broken physics behaviour but for the most part everything is reasonably believable, impressive considering Space Engine still has not hit version 1. I think a recent comment on an imgur album best describes what’s so fantastic about Space Engine:

“The coolest thing about space engine is that if you see it on screen, you can go there. Every. Single. Star.”

And that’s just it, this is the ultimate open-world game universe because it is literally an entire universe and that is itself a technological marvel and beautiful at the same time. It may not be everyone’s cup of tea but I have been looking for something along these lines since Noctis opened up the idea of procedurally generated universes, although Noctis had a very simple ruleset compared to Space Engine as it did not simulate the physics but just dynamically generated the planets according to set numbers. Space Engine is astonishing and can be breathtaking in the sheer scale at which it operates, as well as quite enlightening when that scale is applied to the source of its procedural ruleset, the ultimate example of procedural generation: the actual universe. Space Engine takes the idea that we’re just a smear of biomatter on an insignificant little lump of rock, orbiting a non-exceptional star among 100 billion others within a galaxy which itself is among 100 billion other galaxies and gives it some digestibility. There’s even a thread on /r/spaceengine discussing the discomfort that this sensation can cause, coupled with the wonder as well. 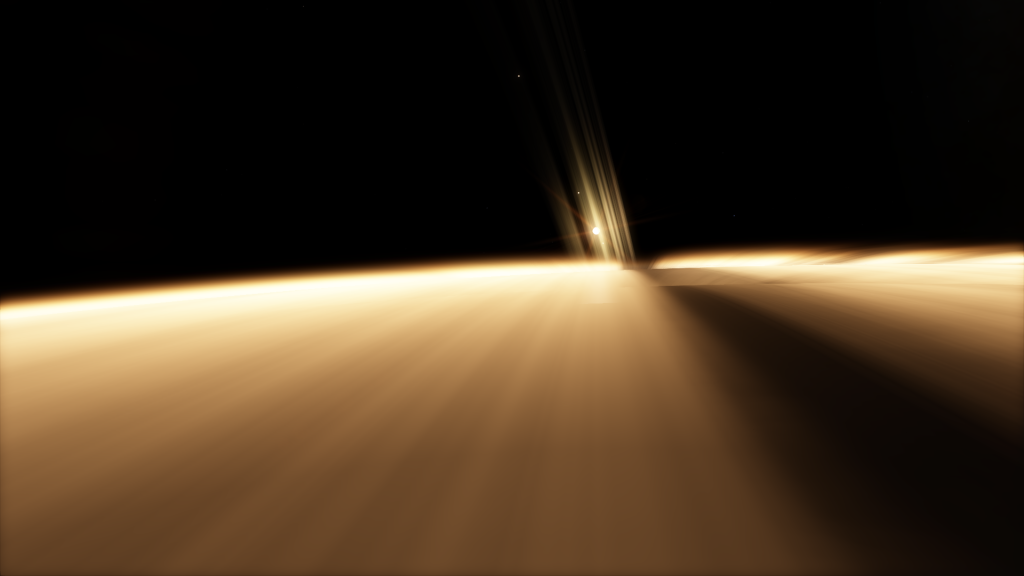 Space Engine is currently available free of charge for Windows from the website. The funding goal for a Linux native version was reached in late December and the developer has stated that this will probably be a couple of versions away as the next release will be a bug fix release for the current version, but it is coming. The system requirements are not exceptional with the recommended spec being a reasonably quick CPU (~3GHz), 4 GB of RAM (although 2 GB may also work) and a newish GPU. The settings allow for a great deal of graphics customisation so whilst you may not get to appreciate the full beauty possible running it on a toaster hooked into a 30 year old CRT, it will probably run to some extent. The barrier to entry really is the OS, system requirements and maybe bandwidth for the quite hefty download, but beyond that it’s free so I would highly recommend giving it a shot. If you do try it and find it as thoroughly enjoyable as I do then please consider donating so that it can continue to develop and improve.

/r/spaceengine (Just look at some of those screenshots!):