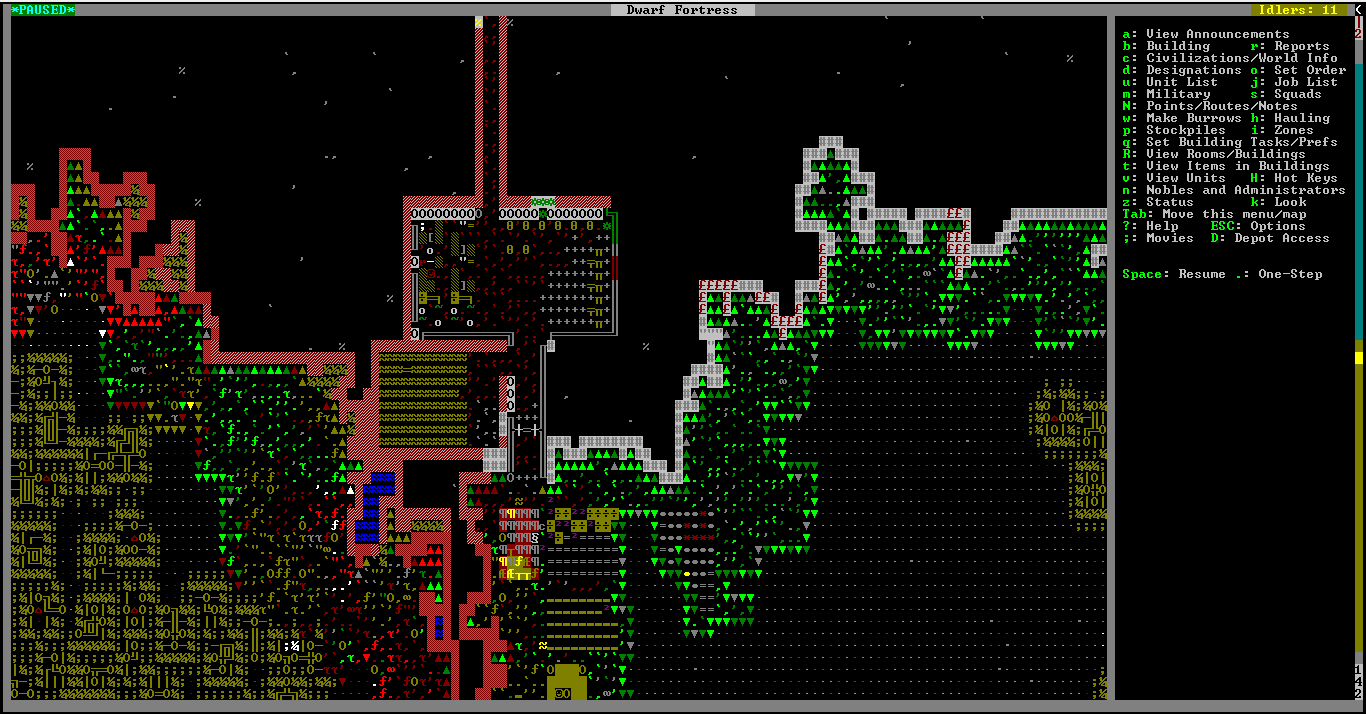 I’ve skirted around this, evangalised narrative-generation games and played derivatives for far too long… it’s time for Dwarf Fortress. As a quick disclaimer; whilst i have played a reasonable amount of the game I am still very much a newbie and am well aware that I have only just scratched the surface of what is possible in this truly immense game. I have tried before to get into Dwarf Fortress, I tried the Starter Pack, the Masterwork mods, etc. On this attempt however I decided to just go vanilla, no mods, assistant programs or even tilesets. The game recently got
it’s first update in quite some time which is supposed to be buggy as hell so I’ve essentially decided that this is the time to try it out, vanilla and broken. I’m looking at the 0.40.x release with no mods and the default Code page 437 (extended ASCII, but may as well just say ASCII) appearance. I’m also only looking at the fortress mode, not the adventure mode. I haven’t yet had a chance to look at the rogue-like adventure mode but I have it on good authority that it is very enjoyable, perhaps I will get a chance to delve into it and review it at some point in the future.

Starting off Dwarf Fortress is more an exercise in dynamic world generation as the entire world and history of the world is generated before you can embark. There is no pre-made world and history here, instead the game will dynamically create the physical world and environment and then populate that world with creatures. Each of these creatures will then live out a history to the extent where it is possible to trace the life of a creature or character as they function within the world. This is dynamic story generation before you’ve even begun your journey, creating a brand
spanking new, dynamically generated world and history for you story to take place in. A super-narrative in which your comparatively minor sub-narrative can fit. The history can be important as the creatures that have ravaged many holds before could still be roaming around, a good reason to research the name of a particular attacking beast.

Following world generation it is necessary to choose your spawn location and starting dwarves, this will generally determine the type of game that you will be playing. Choose a location which is evil in nature and the game will become both very difficult to play and very difficult to predict and the evil presence makes itself known in odd and/or unpleasant random occurrences. Alternatively there are easier starting locations, a choice I decided to go with. My choice on the latest game actually turned out pretty good with a nice mountain to dig into, a stream, some
trees and a nice sandy layer for underground farming. Along with choosing a location it is necessary to choose your starting dwarves. This isn’t something I’m particularly skilled or experienced in and I eventually just went with a pre-baked starting group, which actually seems to have turned out ok.

Once embarked the gameplay becomes, well, like Dwarf Fortress. Food and drink production are to be sorted and then managed whilst living quarters, workshops and other such things need building. Eventually the focus of the fortress will alter depending on what you want, be it trading vast amounts of fine crafts, creating a small army of dwarves to fend off attackers or digging too deep and too greedily. This is really where Dwarf Fortress shines as the player has the freedom to do what they please, dig where they please and essentially react to whatever situation may
arise.

Where Dwarf Fortress does not shine as bright is the interface. Now I’m fine with the text-based graphics, Cataclysm:DDA for example is perfectly playable. The interface however is not quite as intuitive as one might hope, with some quite strange hoops that must be jumped through in order to perform or order tasks. It’s still not quite as bad as the vanilla Windows 8 interface (shutting-down a computer in that is ghastly) but it can present a new player with an almost vertical learning curve. I would recommend watching youtube videos as a makeshift tutorial, the likes of Quill18 or Aavak are a good place to start.

I would normally do a section on the graphics and sound design here but it seems a little redundant with Dwarf Fortress. The extended-ASCII character set does provide a relatively easy to understand representation of what is going on after a certain acclimatisation period. I feel that it could be exactly that acclimatisation period combined with the less-than-intuitive interface which could put people off. This is something of a shame and I would implore you to give the game a real chance and put a little effort in if trying Dwarf Fortress, as it is an experience that takes a little work for a short while to unlock a huge amount of entertainment in the long run.

System requirements for Dwarf Fortress are not excessive, although a reasonable CPU and RAM are going to help in the long run. I’ve been enjoying it running on Debian on my Thinkpad X220 (Sandybridge i5 2520m @2.5GHz, 8GB RAM) and I have yet to see any major problem beyond a couple of keyboard rebinds. The beauty of the game is that it will run on a wide-range of hardware, Windows, Mac and Linux and is available for free. Had I discovered this game during university then I’m not sure I’d have any qualifications whatsoever right now. The game is available for free as the developers Bay 12 Games (two brothers) rely on donations to support
their development. The lead developer Tarn Adams has even called the game his life work and expects decades more development time left to complete the game to the level he wants. Dwarf Fortress has been around for some time and it looks like it will be around for much much longer. If you do try the game and get some enjoyment out of it then consider throwing a few bucks at Bay 12 games so that development can continue.