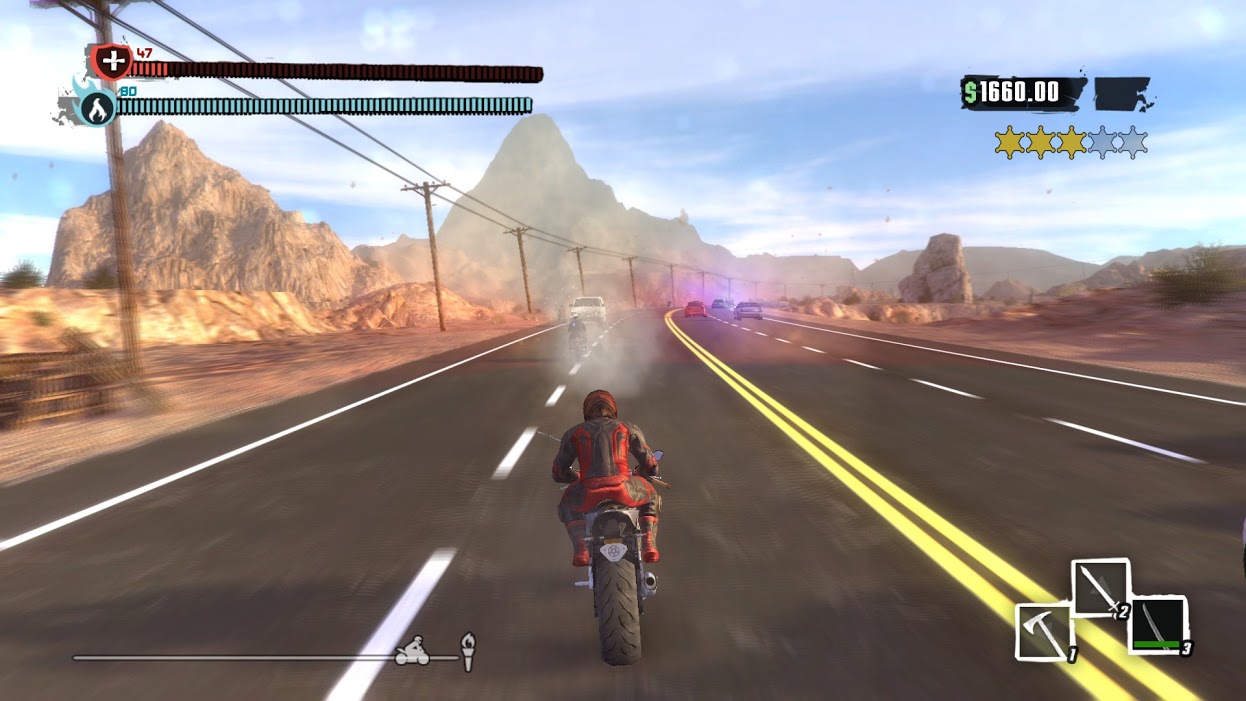 I have some very fond memories of playing Road Rash 2 on the Sega Megadrive (Sega Genesis for you Americans out there) as a child. It was among my most played childhood games along with Sonic 2 and F22 Interceptor, and certainly the most memorable of the three. I also had a bit of a Road Rash 2 renaissance in school whereupon an emulator allowed me to waste many an hour playing Road Rash when I was meant to be studying; doing some arbitrary MS Office task (IT has/had a useless and pointless syllabus). Road Redemption appeared on the scene as a Kickstarter in May 2013 with a fairly conservative funding request of $160,000 and it was funded successfully at $173,000. The developers promised Road Rash-like gameplay, which is something that hasn’t actually been seen since, and evidently awakened the same nostalgia in others as it did in me. As much as I’d like to preview this game as a one-off I’m not likely to be able to and therefore you should perhaps expect comparisons to the Road Rash series throughout.

The core gameplay of Road Redemption is arcade motorcycle racing and combat, much like its inspiration. Road Redemption changes a few things though; as the races are not exclusively just races but have a variety of different game modes. These game modes are accessed through the campaign which appears to pick them at random as you progress through the levels. Winning will net you experience and money and dying will force a campaign restart but also allow the spending of experience points on the unlock tree. (See; weird roguelike mechanic bolted on). The unlock tree provides a variety of mostly combat orientated upgrades and unlike the purchases and money remains intact through campaign attempts. This is a significant change from the Road Rash series and I have to be honest, I’m not sold on it. There is far too much emphasis on the combat and not enough on the racing and tracks. I’d much rather see an updated variant of the Road Rash 2 model whereupon money can be earned from races, bikes can be upgraded and purchased and so on a so forth. Whilst the Road Rash games had combat, and it was fun, it was never the main focus of the game in the same way that Road Redemption obsesses over it. The whole campaign structure of Road Rash 2 for example was very good, and Road Redemption doesn’t come close at the moment. The different game modes are nice to have but again, I don’t want them forced upon me. The combat should be something that merges into the overall racing experience and game modes that focus entirely on it should be present as an option but not a part of the main campaign. Maybe they should be available as side missions or something. The track variety could be a little greater and I am absolutely not sold at all on the rooftop track which is very far from the original experience and at quite a few points irritating. This is not to say that the other tracks are no good, it’s just the the variety seems somewhat limited and overall they can seem quite bland which I suppose is to aid the whole combat-over-racing focus.

The racing and combat itself does feel right even if the combat feels overused and the racing underused. The bike handling is arcadey enough to be a lot of fun and when racing does happen it feels like Road Rash did, with just enough wacky physics to make it work. I’m not a fan of having other motorbikes on the road that are not racing, that doesn’t feel right as they are just there for combat irritation or fodder. I also don’t like that there are cars racing, these are motorbike races and cars don’t belong there as anything but obstacles and scenery. The melee combat is fun, although somewhat over-complicated with different buttons for left, right, kick, grab and a whole different ranged set where it probably on needs an intelligent single button or just left, right and kick. The ranged combat is… well it’s not really my cup of tea. Using a controller the whole process of racing and aiming is a pain and whilst it can be mildly satisfying when it actually works it then feels very overpowered and unsporting. Perhaps I should just request a ‘Classic Mode’ whereupon there are no silly melee weapons or ranged weapons, only classic bats, chains and pipes and such. Such a mode would also do away with the alternate game modes in the campaign, leaving racing with incidental combat.

I’m well aware that every complaint I’ve made so far has essentially been; “it’s not Road Rash 2”, but I also feel that that’s a fair comment to make. Why bother making a Road Rash-like game and then ignore your reference material in favour of a weird ‘modernised’ campaign model, excessive melee weapons, an unsporting ranged system and a general over-focus on combat. I probably wouldn’t even mind that much if it weren’t for that campaign and levelling system: Just because lots of games have experience points doesn’t mean that they have to be rammed into every game in existence. Money and gear are perfectly fine as modifiers for progression, this has been proved by the reference material. The formula wasn’t broken in the early 90s and it isn’t broken now. Despite all of this negativity I did have a reasonable time playing Road Redemption and in no way do I regret backing it during its crowdfunding. I can see what the developers are doing and they are doing it well, it’s just not the direction that I would’ve taken the game.

Visually the game is just the right amount of zany cartoony fun without losing the grittier feel that is somewhat necessary for the theme. It’s not the most graphically astounding game I’ve ever seen and it doesn’t push the Unity engine particularly hard, but I don’t think that pouring resources into making it prettier would have been a reasonable use of manpower. That being said a variety in the visual department is fairly necessary to stop the game seeming bland and samey, and to some extent that’s already true although some greater track variety would be nice. (Except the rooftop tracks, kill those with fire). The sound design seems good and the music is ok, but really it falls far short of the likes of Road Rash 2 which has an astonishing soundtrack. Emulate that Road Rage 2 soundtrack and I’d forgive every ‘modernisation’ design decision all the way to microtransactions, because damn was that one funky OST!

This has seemed like a predominantly negative preview, but it’s not that I don’t like the concept or the developers implementing it, it’s just not what I personally wanted from a new Road Rash-a-like. Currently the game as early-access for $19.99 (approx £12.35) and I’m tempted to recommend holding out until later in the development process to see where it goes. The game also may be your cup of tea, perhaps check out some online videos and such to see how you feel about it. I’d imagine that someone coming at the game without the same expectations as I have may be quite happy to jump right in for $20.00, but I’m personally unable to get past those expectations. The system requirements are not too extreme, normal Unity engine requirements. Compatibility is promised to be Windows, Mac and Linux, although at this current time the early access is Windows only. It’s Unity, why not develop cross-platform from the start rather than trying to rework existing builds onto other systems later?! Either way, as with the general gameplay recommendation I’d recommend holding out for now if you want the game on other platforms, it’s not unknown for developers with less-than-ideal cross-platform development practices to pull away from prior promises. I wish I could have been more optimistic. Despite the gameplay being fun a lot of the time, the game is missing the mark I was hoping it was aiming for and is let down by trying to emphasize the combat over the racing and jamming ‘modern’ game tropes into a genre that doesn’t need them.