Mini Metro is an interesting game and follows a narrative that reads much like similar projects, it started as a game jam entry which then evolved into an alpha release and has gradually been seeing steady development into a full game. Mini Metro is a small game where abstracted subway/underground/metro lines must be planned around various station types and passengers, with an ever expanding city to keep up with. This is in essence a puzzle game, providing a pausable and stimulating experience that requires rethinking different routes according to requirements. The game is currently an Early Access title on Steam, although this is not to be seen as a negative as the development seems to be steadily progressing with more maps and features creeping into the game. Certain aspects of the game are still missing, most noticeably sound and music however that is promised in a later update.

The first map on offer is the London map with the very distinctive River Thames running across said map. The game starts with a few stations and then gradually expands out. The stations themselves are represented by a certain shape, each “passenger” is also represented by the same pool of shapes and the game is merely a matter of getting the correct shaped passengers to the correct shaped station. If a passenger is sat at a station too long then the game will end, so it’s important to have things moving as much as possible. The process of getting these passengers around begins with dragging out a line between stations and then placing locomotives on that line, and later on adding extra carriages to said lines. Depending on the difficulty these lines can be reconfigured at will, and the game paused so that it’s possible to wipe the slate clean and start afresh if need be. I’ve tried this game in various guises, from the very early version to the current release and one thing that I’ve noticed very clearly is the huge improvement in interface. When playing the early versions the dragging of lines could get very fiddly and frustrating as one grabbed the wrong line or deleted from a station accidentally or various other little niggling issues, however at this stage the entire experience is a whole lot smoother. The action of drawing out the lines is core to the game and to have that now feeling so smooth and natural allows the game to become the zen little puzzle game that it always had the potential to be. 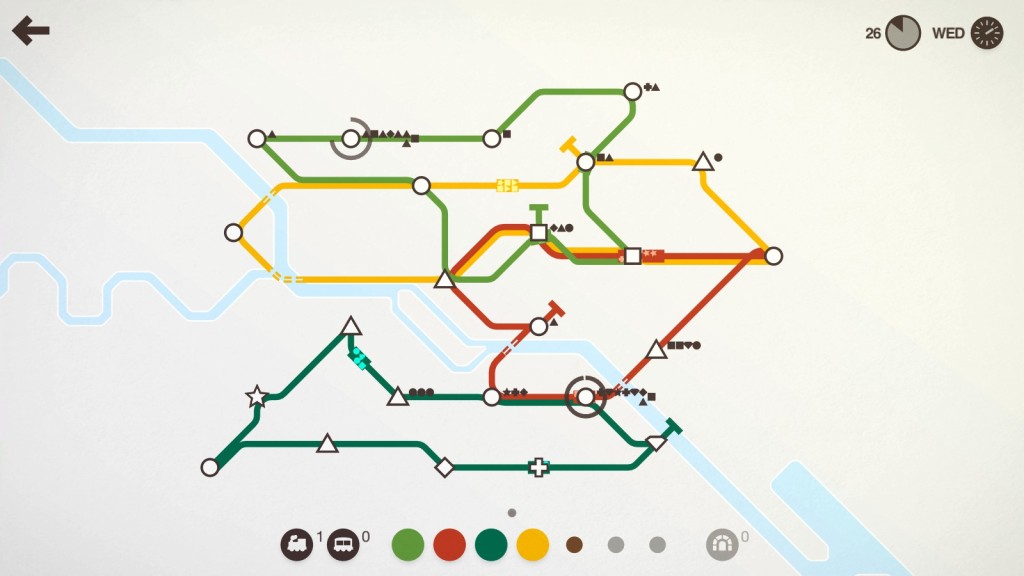 There have been additional mechanics added since the early versions, with the ability to add extra locomotives and carriages to lines as well as various other management elements that I’ll leave you to discover. In short what this development time seems to be being used for is a deepening of the fun but simplistic gameplay pioneered by the game jam prototype. This is positive to see and I’d imagine that once the sound has been implemented and refined to match the gameplay the developers should have a game very nearly finished. As it stands now I’m not opposed to the lack of sound as it allows me to play it in a window on the desktop as a video or music is playing, it’s a pretty nice way to play the game. There are little moments of stress as the game tends to snowball problems and small mistakes in layout at the start can become significant messes. This is a little like the subway system in Cities: Skylines but standalone and more in depth, however unlike Cities this can be paused and everything placed new with no cost. (Cities can be paused but tearing up infrastructure is a pain). It is these features that blunt the later and more stressful elements as one is less likely to be overwhelmed with the ability to pause completely and spend some time thinking over possible solutions. It’s worth noting that other difficulty levels are available including a more relaxed infinite mode where the game doesn’t end as passengers have infinite patience and a much harder and more stressful mode which makes lines permanent.

Well worth mention are the simplistic yet beautiful aesthetics of the game based upon the work of Harry Beck. This abstracted perspective of the Underground, first developed by Beck in 1933 is a perfect visual style for a Mini Metro as the clean and functional aesthetic reduces the game to its most fundamental puzzle elements whilst still being immediately recognisable for what it is. This makes sense as Beck originally designed his Tube map around electrical diagrams intended to make a complex system easily readable, something that puzzle games also strive to do. What’s most interesting is the manner in which the instantly recognisable and visually pleasing style combines with the game to produce very attractive screenshots of even the most hideously inefficient transit design or alternatively to quote the press kit; “Each game’s map is a work of art…” I agree with the sentiment and I hope that the screenshots attached to the post will sway you in favour of agreeing too.

Currently the game in in Early Access and available from Steam for £4.99 (approx $7.15) or through the Humble Store/Widget for $6.99 (approx £4.40). As per usual I would recommend the Humble option. The system requirements aren’t significant so I wouldn’t worry too much, if anything this is an ideal little laptop game. Also of note is the compatibility which is very good: Windows, Mac and Linux on during Early Access with mobile ports expected down the line. It works great on both my X220 running Debian Jessie and my desktop also running Debian Jessie/Windows 8.1. I’m pretty happy with this, having it run on Debian on my X220 means a quick and easy game to play during study breaks. In short then Mini Metro is a visually appealing, relaxing but sometimes stressful puzzle game based around trains, and who doesn’t like trains?! (Besides certain commuters on certain lines, but shush).