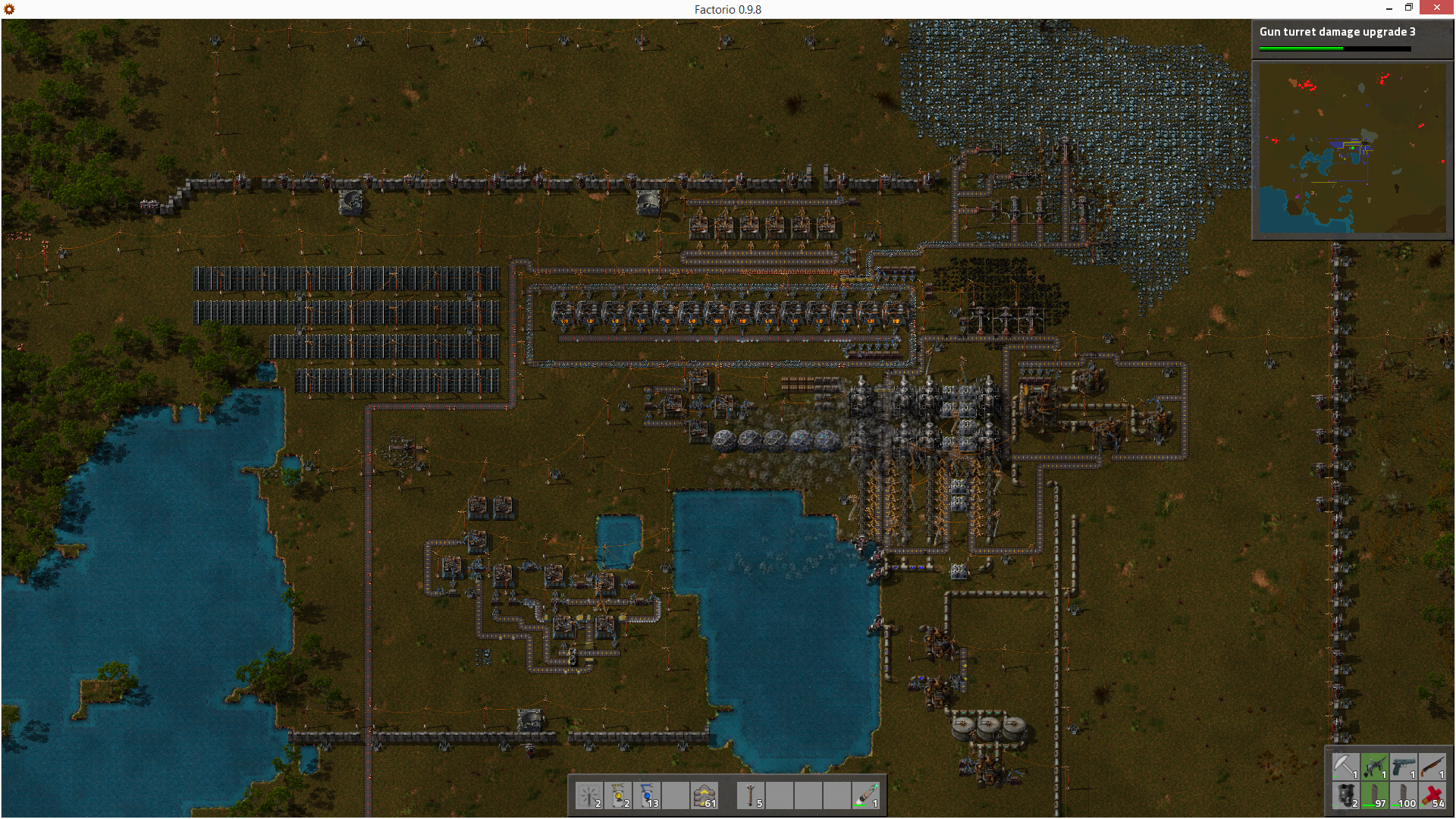 I’ve heard Factorio described as resembling a multitude of things; Tekkit, Feed The Beast, Open TTD, Minecraft, even Anno… and really in essence it is similar to all of these. It is a top-down survival game based around the use of components to produce automated systems, a Feed The Beast top-down edition.

I’m aware that this will immediately strike a chord with many including myself, the Minecraft modding community produced cumulative works such as Feed The Beast and playing with such a mod pack transformed the game. Quarries automated ore gathering but introduced the problem of transport, sorting and processing. The transport sorting and processing then required organisation and power which introduced further problems of fuel logistics and sorting and so on. When combined with multiplayer this modding extravaganza transformed Minecraft into a different game and contributed tens more hours into the hundreds that the Minecraft bug had already given. This is in essence the core to Factorio, a game that presents dynamically created puzzles and offers the tools to solve them dependant upon progress. I will also mention that Factorio is another crowd-funding success; initially an IndieGoGo campaign earning €21,626 of a €17,000 goal it was not an overwhelming success but certainly reached the target. Although the release date initially promised in this campaign has slipped significantly the development process is active with regular game and news updates. It may be a little early to say for sure but at this point I’m willing to chalk this up as another crowd-funding success, something for the naysayers to consider.

Factorio spawns your character in an open-world filled with resources, from this point it’s necessary to mine a little stone, coal and ore in order to get some basic machines going. Maybe at this point you’ll start thinking automation and logistics; what if I could move that ore from the mine to the furnace automatically? what if I could move the coal from the mine to the furnace automatically? Then come the belts and the robotic arms to carry out these desires, which leads to the next major goal; electricity. The basic electrical production is essentially a steam engine so we’ll need a water source, pumps, piping and something to burn. At this point maybe you’ll consider a redesign of the belt system feeding your furnaces to include the boilers necessary for heating the water for the steam engines. Following the establishment of electrical power it’ll be necessary to overhaul many parts of your existing system to use electrical power over coal, thus easing logistical requirements from coal feeding to simple power lines. After this point things start to accelerate as the requirement for defence against hostile native wildlife or research will prompt the creation of logistic and manufacturing setups to produce ammo or science, on top of the fairly necessary automated resource gathering and smelting systems. This is the core of Factorio and it only expands from that point on. Resource production and manufacturing can be used to research further technical advancements which lead to more efficient and expanded resource production and manufacturing. The eventual aim, at this point at least, it to research the rocket defence battery which takes a significant amount of production as well as sitting at the very end of a quite considerable tech tree.

Just this alone may make the game a little easy, imagine Minecraft without mobs. So in a really very nice if not slightly cliche sci-fi twist there is native wildlife to contend with in the form of an insectoid race. These aliens will initially be neutral and only strike when approached however a few consequences of development will eventually trigger progressively more aggressive behaviour. In addition to more aggressive behaviour there will also be a shift in the type of alien that spawns with more aggressive states evolving ever larger and fiercer aliens. The main concerns over development that will generally provoke this response are pollution and territorial issues. Pollute and you will provoke a response, develop took close to an alien spawning area/village and you will provoke a response. Therefore it is necessary to not only industrialise for the sake of research but also defense. The production of radar to monitor the enemy, turrets to shoot the enemy and walls to keep them out should be kept in mind as an unopposed enemy swarm can wreak havoc when let loose among your beautifully designed and carefully balanced factory complex.

Aesthetically the game is top-down but with a slight offset 2.5D perspective on game elements. This makes for a somewhat unique visual style as in this case something isometric may have been more expected, however that is not to say that it is anything other than attractive. The visual style manages to be distinct and appealing whilst also retaining the essential core of functionality that such a systems oriented game relies upon. When building complex automated factory complexes with many differing components having such clear visuals is essential. The sound and music design is also very well done although I will admit I have the music muted for the moment as I’ve taken to combining Factorio with episodes of Stargate on the other monitor, it’s a good combination, don’t judge too harshly.

Compatibility-wise Factorio is second to none, Windows, Mac and Linux compatible with relatively light system requirements and some of the best windowed/fullscreen compatibility I’ve seen in a long time. I like to play games like this with something else on the other monitor and therefore a really good windowed or borderless windowed mode is very useful and Factorio delivers on this front. Stability and performance have been excellent over the time I’ve been playing although I have not truly reached the full potential scale that may start to tax the system. Factorio is getting a price increase to €15.00 (approx £12.30) on the 1st June so if it really interests you then I’d recommend grabbing it from their website for the current price of €10.00 (approx $8.20) which is an absolute steal for the content. In addition to this the devs have ticked all the right boxes and provide a free demo so that you can try it out free of charge.