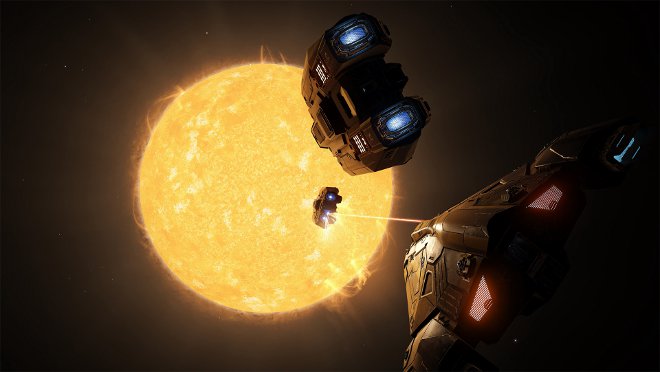 The original Elite was a little before my time, which is a shame really as I probably would’ve gotten on with it like a house on fire had I found it. Elite was a free-form space trading, combat, exploration game, or rather it was *the* free-form, space trading, combat and exploration game. Then in 2013 a team led by one of the original Elite developers; David Braben started a Kickstarter campaign to raise £1,250,000 in order to develop a modern imagining of the original Elite experience; Elite Dangerous (ED). I’ve discussed Kickstarter and crowdfunding before but ED is a good example of a project that did well because they wanted to avoid the publisher model. Inevitably the comparisons will be drawn between this and the Star Citizen campaign by Chris Roberts, and whilst the projects are slightly similar they actually represent different ways of looking at the combat space simulator and this is probably mirrored in their uptake. Star Citizen follows the more recent story driven theme found in the Wing Commander and to some extent the Freelancer games whereas ED is very much a free-form dynamic game where the player generates their own narratives within the procedural content. I’d liken it to the difference between a traditional open-world RPG like Dragon Age: Origins and the completely free-form RPG like the stellar Mount & Blade: Warband. It is for their differences that comparisons are somewhat null and there really is ample space in the risen-from-the-ashes space combat simulator genre for both. The Kickstarter eventually earned £1,578,316 of the £1,250,000 goal, obviously beating it. As of very recently the pre-purchase development releases hit feature freeze with the release of Gamma 1.0, a significant milestone leading up to the anticipated launch date on the 16th December 2014. I personally have only played the later Beta releases and this Gamma release, so whilst I can comment on the recent history of the development I do not have much experience of much older builds.

The game experience begins with a basic loaned ship in a random system, from which you are encouraged to take on missions from the bulletin board to earn some cash. After you’ve earned some cash the game is as open as it could possibly be, with theoretically the entire galaxy simulated and a whole host of options for you as a player. This is initially rather daunting and in my first few attempts at playing the Beta I bounced off purely through a lack of direction (and perhaps time constraints). With the release of Gamma though and being ditched in a random system penniless I got my feet a little through a nice agricultural-tourism system. This system contained a high wealth, high population station with a flourishing tourism industry. Tourism stations are brilliant consumers of just about everything valuable, including tobacco which was cheaply available from the agricultural stations in the same system. Thus started the somewhat grindy process of hauling tobacco to the tourism station and then biowaste (poop) back to the agricultural station (tiny profit but it makes sense to make some money on the trip back). This isn’t the most complex trade-route nor the most interesting but it is above all very very cheap. Fuel costs for the inner-system trip are negligible whilst the profit on a unit of tobacco can be over 1k credits, which in my newly bought and slightly refitted Hauler will produce over 12k income for one inner-system run and under 30 credits fuel expenses. My intention is to continue farming this trade route and upgrading the Hauler until I can afford a larger transport ship, and so on. This however is just one way of playing the game, and not a particularly inventive manner of doing even that. If I’d wanted I could have taken to accepting bounty missions, hunting down criminals for profit and then investing that profit in combat upgrades or a new combat oriented vessel. I could also have taken to stripping down my ship to a fuel tank, sensors and a fuel scoop and proceeded to explore systems for valuable data. There really is a whole galaxy open to you.

Not all of ED is smooth sailing with one key feature proving more than a little irritating; always online requirement. The game apparently runs much of its economy and other large scale elements through online servers, so that they react to the player based dynamic economy and such. The upside of this is easily integrated multiplayer and a game universe that feels far more alive than it otherwise may. The downside is the requirement to be always online, introducing two points of failure just to play alone. If the servers go down, you can’t play, full stop, you are shit outta luck. The same applies for your net connection, say your scumbag ISP naffs up your connection, again, shit outta luck and no ED for you today. This is the Diablo 3 problem all over again: Online requirement should not be enforced for single player games, to do so is bullshit. The developers should be given a rickety piece of crap Orange DSL connection or dial up for a few months and then asked how enthusiastic they are about always-online requirements. As long as you’ve got a reasonably reliable connection and the servers stay up this isn’t likely to be a problem, but it’s still irritating getting kicked from a single player session because of a connection hiccup. This has also caused controversy with Kickstarter backers who were promised a DRM-free version. Such a version is entirely impossible with the always-online requirement, being that it’s the most invasive and inconvenient form of DRM around (requiring optical media in a drive is a very close second, man I hate that).

Aesthetically the game looks brilliant. The attention to detail and the beauty to be found in the procedurally generated galaxy is immense and whilst it’s not quite the levels that Star Citizen is promising it is certainly the prettiest space game I’ve played in a very long time. The design doesn’t stray too far from the same principals as the game’s predecessors, just updated and filled out with more detail. The ability to land on planets, if it gets added in a future update could add an extra element of eye-candy but as of right now it’s a case of just looking out across the accurately modelled star systems.

The system requirements for ED are fairly high compared to many of the games that I tend to cover. It’s currently Windows only with a recommended spec of a quad core CPU, 2GB RAM, a minimum graphics card requirement of a Nvidia GTX 260 (and whatever the ATI equivalent of that is) and an internet connection. These requirements are going to nuke most laptops, although perhaps the newer iGPUs will be capable. Also I’d personally recommend adding a HOTAS joystick setup to that hardware requirement list, whilst it’s not essential the game does play much better with one. Platform support is something that’s been hinted at with an OSX port supposedly three months behind the Windows version and some very vague hints at the possibility of a Linux port. Pricing is triple-A levels with the boxed pre-order at £45.00 and the digital edition at £35.00 with no Steam release. The more expensive early-access pricing is now closed so I’m afraid purchasing now means a wait until the 16th December to actually play the game. I’d say that ED is a recommended buy, but with some significant caveats: Unreliable internet will render this unplayable, if you can’t play an MMO then ED is a no no. No prior interest in space trading combat simulators; probably not, it’s quite expensive for an impulse buy. In short it’s really great if it’s exactly what you’re looking for, I wouldn’t recommend impulse buying this in the same way I wouldn’t recommend impulse buying XPlane 10. Overall for me personally the annoying little things would probably have driven me away had it not just clicked in the same way that Mount & Blade did, it’s good enough for me to look past the negatives.

Note: The screenshot on this article will be a generic one as when I started the game to get a screenshot it updated itself and now spontaneously places a bounty upon me leading to my destruction (and a significant loss of credits) after a matter of minutes. This should hopefully be fixed soon, hopefully as it does mean I can’t play until the next hotfix.

ED on the ED Store: