So I was planning on covering Homeworld Remastered this week, and whilst I have played a reasonable enough amount to wax lyrical on how great it is, I haven’t yet played enough. Next week shall be Homeworld week, however this week is dedicated to a fun little Youtube inspired purchase: Besiege. Besiege is a fun little construction puzzle game set within a semi-realistic medieval setting. This is a game that offers a Kerbal Space Program-like build system but with specific puzzles and challenges to complete with the constructed siege engine. It’s an Early Access game, currently labelled as Alpha by the developers so there isn’t a huge amount of content with regards to challenges. In spite of the relatively sparse set of challenges the important bits are available, principally a wide variety of building blocks which act as a Lego set of creative design. 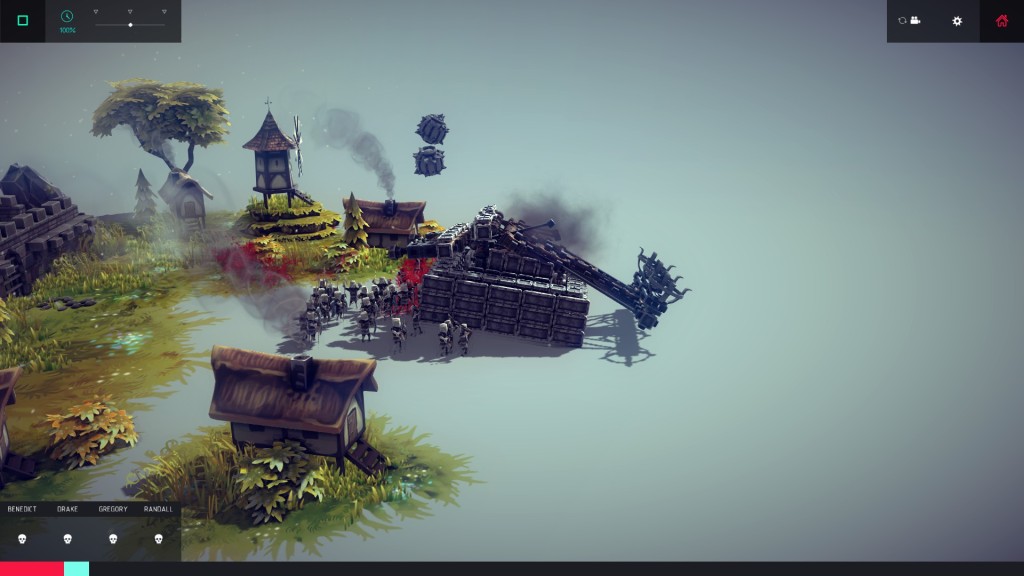 The Lego set comparison is really the most apt here, although if we were to be pedantic it is arguably closer to Lego Technic than just vanilla Lego. (Note to Americans: Lego, not Legos…) The building components are styled medieval with the more modern aspects such as flight seemingly inspired by Leonardo da Vinci, which is perfectly fine because it works well. For an alpha there is generally a very high level of polish with many of the fundamentals fully fleshed out. The physics engine is effective if not a little comical at times, apart from maybe the wings which I haven’t gotten working all that well yet. The structural simulation combined with the overall physics engine determines how you construct your vehicles as they must operate and hold together within reasonably realistic constraints. An extension of this, and an avenue not explored by the likes of un-modded Kerbal Space Program is the inclusion of weapons and bombs and such. Not only must your construction withstand the basic forces of physics but also assault from a number of enemy weapons, all whilst attempting to complete the objective. This generates interesting designs as a choice must be made as to what extent a single multirole machine or a unique design per puzzle are adequate. 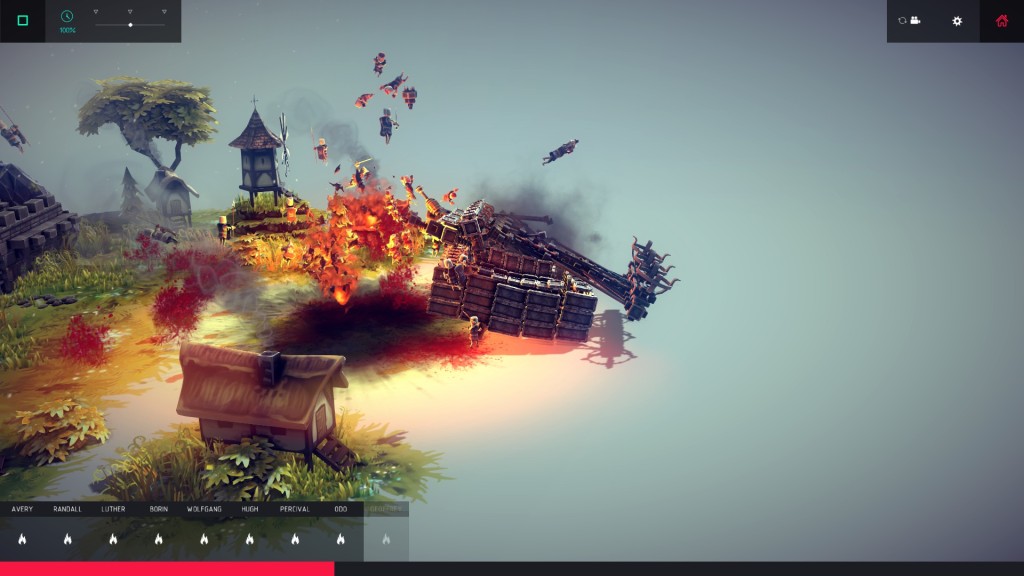 The puzzles themselves are limited at the moment however there is much indication as to a far more varied future. Many of the missions are based around various levels of destruction, with some requiring differing approaches. Some missions are straight-up battles involving just infantry opponents and these can be handled through any combination of blades, spikes, flame-throwers, cannons, crushing, bashing, etc. These, along with the basic building destruction missions represent the squishiest of targets and arguably require the least effort. Some missions, for example the minefield, will test the manoeuvrability of your vehicle and others will require the destruction of much sturdier structures. These sturdier structures cannot be breached by basic weapons and require novel weapons such as the bomb which then require an equally novel launching solution. My eventual solution to the above problems was a solid wooden frame and tank-control movement system with a separated metal armour shell for greater impact and projectile resilience. This combination made the core of the vehicle almost impervious to practically every enemy attack, in fact the greatest threat faced by this vehicle was itself. The vertically pivoted flame-throwers intended for anti-personnel purposes could set alight the target which could then set the vehicle on fire, if due care is not taken. Whilst the armour shell is metal and fire resistant, the core structure of the vehicle is still wooden, meaning that a fire can ravage the insides of the vehicle leaving just a metal shell. For the purposes of hitting much harder targets than infantry and weak buildings the vehicle is equipped with a triple shot catapult equipped with bombs. Once again, the strength of the vehicle can be its weakness as a single arrow to a bomb, a miscalculated launch or a fire could cause these bombs to cook-off, destroying the vehicle. This is the essence of Besiege, creating crazy contraptions to solve puzzles and then attempting to solve the ridiculous problems that these crazy contraptions introduce. Some of the puzzles are not necessarily combat based, with one requiring the movement of bundles of wood into a target area using a grabber. My hope is that these early missions are an indication of what’s to come and I also very much hope that there will be a mission editor and Steam Workshop support, thus enabling significant longevity to the game through interesting and fun level creation and user-made content. 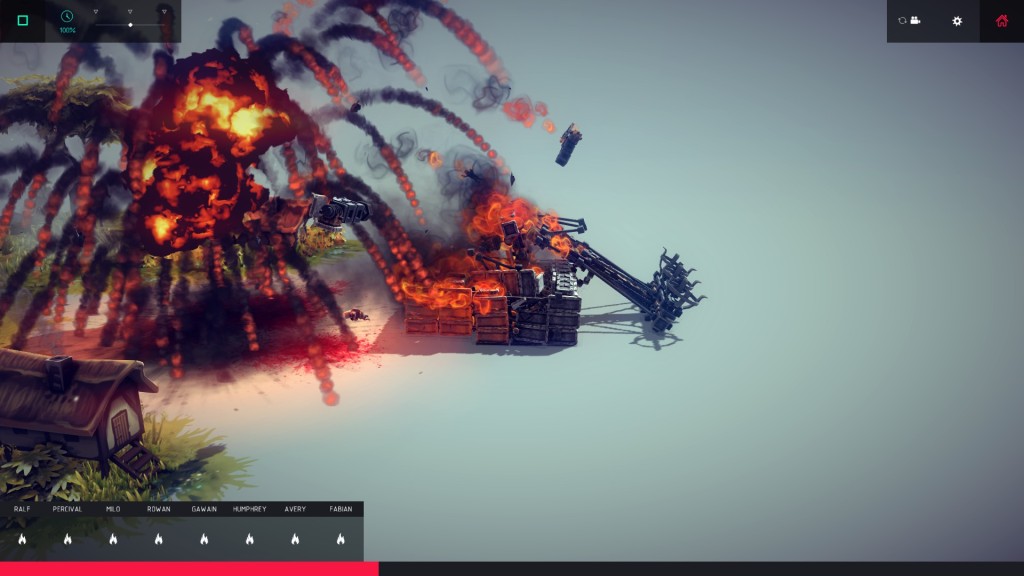 The aesthetics of Besiege and surprisingly polished for an alpha release. The developers have very much decided to emphasise the puzzle nature of the game through the aesthetic as the levels contain a fairly cartoony series of assets placed within a sterile white environment, reducing the scene principally to the main puzzle aspects and ignoring any form of wider context. At first I was sceptical about this, but mostly because I was more inclined towards the open-world vehicle creator, but as I’ve played through the game a couple of times it seems to fit with the overall feel. If one wants a game of medieval construction with an open world and wider context then Medieval Engineers has that covered. Besiege is a puzzle game at heart, it’s just that the solutions to those puzzles are as varied as the imagination and already varied toolset allows and the visual design mirrors that. 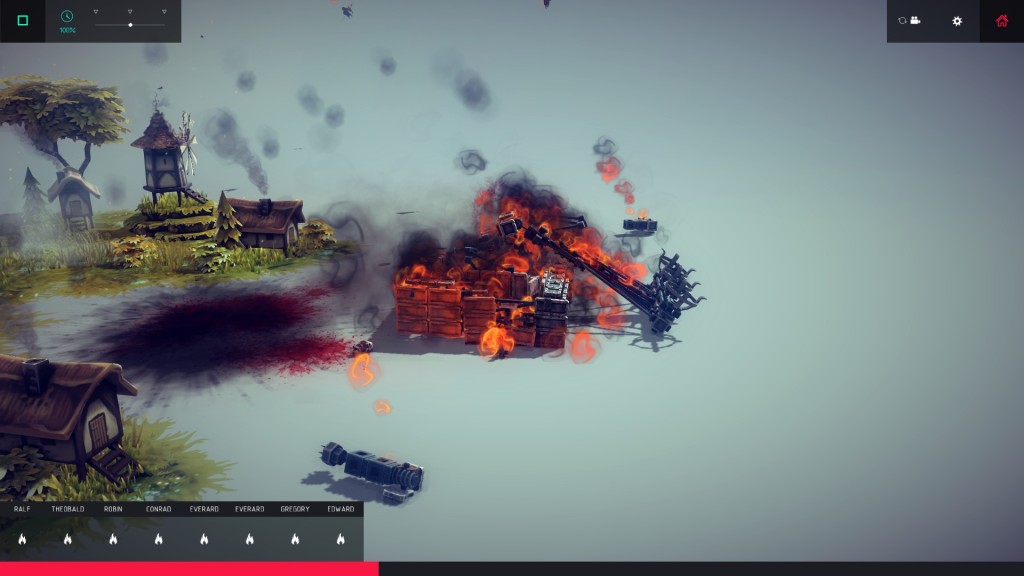 If any of this sounds remotely interesting then I would highly recommend checking out some Youtube videos of the game and Robbaz in particular. His construction of a not only functional but very very stable and effective Chinook-esque helicopter is by far one of the more impressive feats, especially as that same helicopter proved a very good multirole vehicle for completing the level set as it stands. Currently the game is in an early access release on Windows, Mac and Linux available for £4.99 (approx $7.60) on Steam and £4.58 (approx $6.99) on their site through the Humble widget, as ever the Humble option is highly recommended. System requirements aren’t too major, although I haven’t yet had a chance to test it on my lower-end hardware so I can’t confirm.