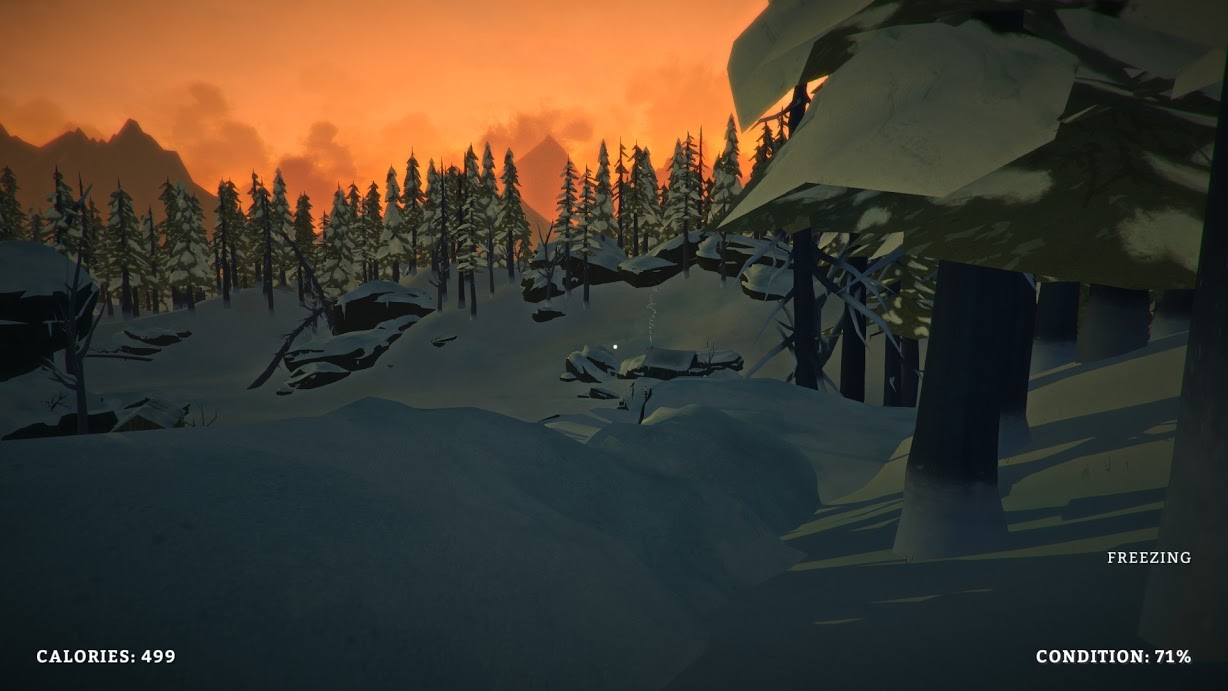 Today I’m back in my comfort zone with The Long Dark. The Long Dark is an immersive survival game set in the harsh frozen north. This first came to my attention as a Kickstarter about a year ago and it seemed exactly up my street with a strong showing and the added bonus of an early bird discount. Since then the game seems to have been developing nicely and the public early access release recently became available. Judging from the general reception the game is having a slightly rocky time, although that seems to be mostly related to the public perception of the developer’s past and mechanics that are most certainly tweakable at this stage. The subject of having ex-AAA developers working as indies is something I won’t cover here, but the tweakable elements that could be improved are certainly worth mention.

The Long Dark currently only offers the sandbox mode which will ditch the player in the wilderness, seemingly equipped with the okay but not stellar equipment of a pilot. The story principal of the game is that a large geomagnetic storm has fried almost all advanced electrical equipment, including your plane. The result is a quiet apocalypse which at this stage of development doesn’t seem to mean a great deal due to the sheer remoteness of the area you crash in. I’d imagine that the area open to explore in the current sandbox would not be all that different with or without the large geomagnetic storm, but that’s neither here nor there. There is a reasonable amount of simulation with the key stats being those of hunger, thirst, fatigue and cold. Cold is the big one here as it is brutally harsh: Clothing protection and windchill are modelled along with the corresponding weather effects of general temperature and windchill. Your pilot gear is woefully inadequate and the start of the game is generally a mad dash for warmth or for shelter away from the biting wind. More and better clothing is available for scavenging and at a certain point it is fairly do-able to have a clothing set that will protect against most cold, bar the severe storms. This clothing can also be broken down or repaired allowing a good set of clothes to last as long as you need. Unfortunately on the clothing front it is not possible to layer quite as extensively as I’d like as there are a limited number of clothing slots available for use. This could possibly do with tweaking as personally I’d absolutely layer three jumpers (sweaters) if the temperature was hitting -20°C (get-with-the-21st-century°F). Other than that though, the cold mechanic is well thought out and appropriately challenging.

The hunger and thirst mechanics operate slightly differently as the thirst is seemingly based upon a constantly degrading mystery bar whereas hunger is tied into the calorie counter. The calories counter is among the parts of the game that others find issue as it is rather extreme in its brutality. I’m actually fairly on the fence with it as there is a great deal to factor in when working with such a cold environment. The general rule for cold environments is that they have an enormous effect of the body, including calorie usage as the body must burn calories just to stay warm. That being said, 2000 calories from cooked deer meat should last a little longer than what it does and starvation was the main reason for my eventual demise as following meeting clothing, drink and shelter requirements every waking hour was a search for food. I understand that the game is intended to be this challenging but my character lasted just over 4 days and in that time managed to burn through every morsel of food scavenged from a variety of locations and a multitude of dead deer. This is perhaps an element of the game that could be rebalanced slightly. Sharing a similar issue is the fatigue meter which seems to operate on a timescale that is tweaked away from the natural day/night cycle. The result of this is that your character’s sleep cycles will be entirely out of whack because even after 8 hours of sleep they can barely last the morning before needing to sleep again. I’m aware that the cold environment will affect the nature of sleeping and rest but like the calorie counter this seems to be shifted a little too far towards illogical difficulty and away from actual bodily function. The game also features wolves to add a bit more danger… if you do give this game a go then give these creatures a wide berth.

The map itself of not randomly generated and therefore is possible to learn over time. This is an interesting idea and whilst I value the creative advantages that a human-made map can have I feel that not having a randomly generated world leaves the game open to, well, gaming. After a few plays you will know much of the map, the best spots and where to scavenge for materials, which kind of hurts the replay value a bit. At the moment this is something of a killer, but is less important as it is in early access and is not finished. I can unfortunately see the nature of sandbox as a curated non-randomly generated mode being quite limited. Perhaps this will change as the story mode is phased in, perhaps the story mode will expand the game with more replayability or maybe the map will be expanded to a size where even with a non-random nature it will remain replayable. As is I enjoyed the map however I did find that even after only a couple of hours play I was circling back to the same places multiple times. Perhaps I’m just too accustomed to randomly generated maps that offer a new, albeit algorithm-generated experience every time.

The aesthetic of The Long Dark is also interesting point as rather than photorealism the developers have opted for a more cartoony and stylised look. I’m in no way opposed to this and there are times where the game looks absolutely astonishing. It must be said that the colouring that they’ve gone with combined with the simple yet clean textures and models creates an awesome effect, especially with the variable dynamic lighting and shadows. That may sound like a GPU manufacturers’ sales blurb but in the case of The Long Dark it is entirely true. The sound design is similarly refined, creating an amazing sense of atmosphere and managing to reinforce the numbers of brutal unforgiving weather with sound effects to match.

The system requirements of the game are reasonable as it can be quite a pretty and resource munching creature; minimum spec is an i5 2GHz+ with at least an HD4000 iGPU or equivalent and 2GB RAM. As a low-end spec that’s approximately a mid range current laptop so this does not get to enjoy toaster compatibility. Platform compatibility is questionable as the Kickstarter promised Windows, Mac and Linux compatibility but only the first two are evident at this point. Whilst this is not necessarily an absolutely bad omen it doesn’t bode well for a development process that allows for pain-free cross-platform releases, so perhaps that Kickstarter promise may need putting on ice for the moment. Pricing at this point seems to be £14.99 (approx $24.50) on Steam and $19.99 (approx £12.24) through the Humble widget on the developer’s website. As ever I am recommending the Humble option as it provides exactly the same as the Steam version plus DRM free options, plus a greater developer cut and all at a lower price.

The Long Dark on Steam:

The Long Dark Kickstarter for reference: