Following on from last week where I discussed very generally the idea of modding will be a series of modding spotlights, looking at examples of great games made greater through the brilliant modding community and the tools provided to them. Today I’ll be looking at the recently fully released Kerbal Space Program (KSP). I’m aware that is yet another article on KSP but my recent review of it and the questions raised by last week’s modding article sparked a desire to explain in detail why modding makes some of my favourite games, my favourite games. KSP had a long and open development period, with Squad consistently making the game open to modders throughout it. The end result of this is that by the time the game was released there was already an enormously active modding community spanning multiple repository websites and changing almost anything about the game you could imagine. 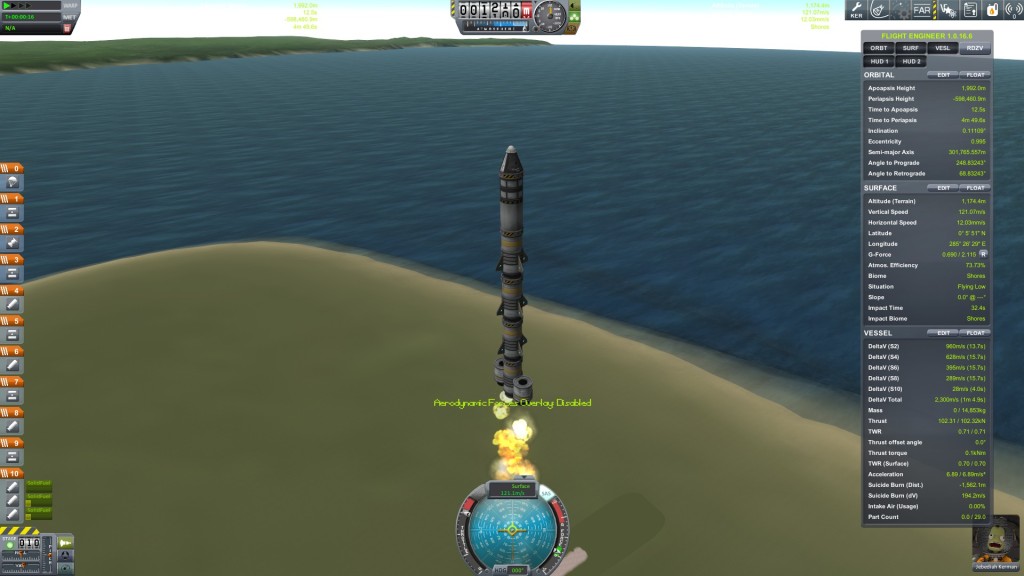 Modding within the development period is an interesting strategy and something of a double edged sword: On the one hand it opens up the potential for players to customise their game to whatever they want it to be without altering the development of the core game, a vital move in avoiding feature creep and a never ending development cycle. On the other hand the constantly shifting codebase of an in-development game means that there is a high likelihood of mods breaking as updates are rolled out, potentially affecting the player’s’ experience or inclining them to avoid testing the newer version. The modders also suffer under this rapidly shifting codebase as the constantly shifting core game makes maintaining mods in a functional state much more work as they need to be altered or completely rewritten in order to accommodate the changes. Squad have been fairly good although I think the issue of mods regularly breaking has cost the community somewhat, as modders move away from the scene due to the high maintenance and otherwise fantastic mods disappear into obscurity. The manner in which modding has allowed Squad to develop the game for the wider market that they originally envisaged whilst still satisfying the hardcore fans is possibly its greatest accomplishment. 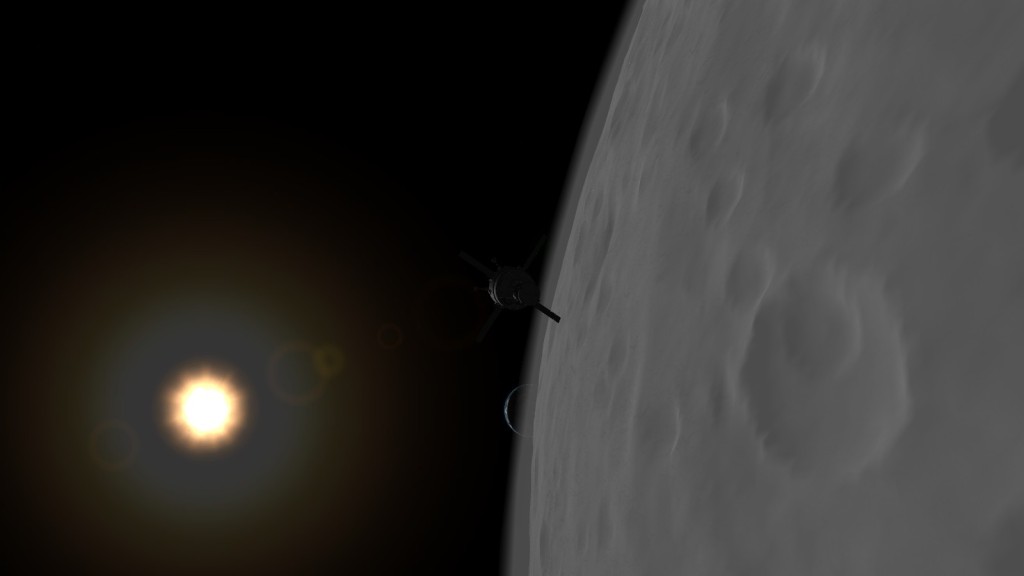 First of all I’ll discuss Ferram Aerospace Research (FAR) which is a mod that completely overhauls the atmospheric modelling of the game. This is has become something of a hot topic recently as the final release of the game included a completely revamped atmospheric flight system, however following feedback Squad have been tweaking the figures on this model back and forth, overshooting on almost every attempt and breaking many previously functional designs. This upset people quite a lot as at the time FAR had not been updated, so those that would originally have merely dismissed the changes to the core game off hand and used the mod were suffering along with those happy with the vanilla game. Luckily FAR has now been updated and represents a significant advance from its prior iterations and the newer core game modelling and an enormous advance over the old vanilla aerodynamic modelling. FAR uses a voxel-based system to calculate the aerodynamics of the craft  as a whole rather than relying on the specifications of the individual parts. The result of this is a very accurate modelling of aircraft flight characteristics, improving the feel of everything from space-planes to rockets. Ultimately this was a necessary change in the development versions of KSP which had very basic atmospheric modelling, and with the current pendulum effect of Squad calibrating the new vanilla model it feels rather necessary now. I couple FAR with a mod called Deadly Reentry (DR) which previously added fatal atmospheric reentry but now represents a upgrade in reentry modelling over the new vanilla model. FAR and DR combine to significantly alter the experience of anything that isn’t space-based in KSP which is important as that makes a up good chunk of the most challenging elements of the game. 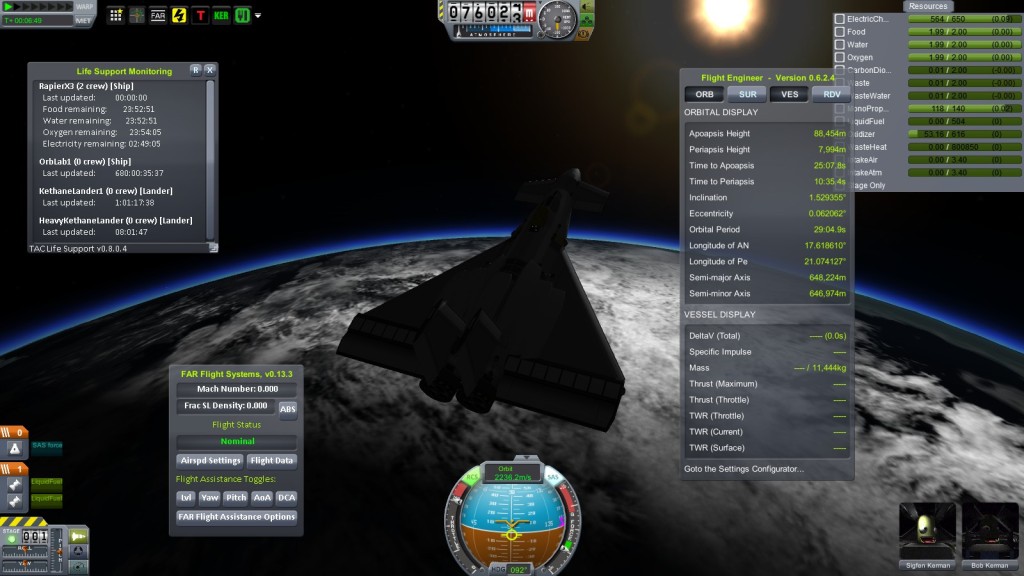 Next up on this little mini tour of mods is the non-vital but very interesting and entertaining Remote Tech. Vanilla KSP makes probes rather overpowered in comparison to their real-life counterparts. Whilst the science updates overcame this limitation somewhat by requiring crewed missions to fully take advantage of the science points available, probes still represent a low-risk, low-cost solution to exploration without the real-world difficulties actually experienced by craft of this kind. Remote Tech essentially nerfs these qualities by introducing appropriate connection mechanics. This isn’t just a straight difficulty modifier as Remote Tech is far more than that, it adds in the requirement for remote probes to be in radio contact with a base station, which as you can imagine isn’t very easy. Line-of-sight plays a big part in Remote Tech, launching an unmanned probe from the Kerbal Space Centre without any form of relaying communication network will eventually render the probe uncontrollable once it loses site of the ground station or goes beyond its antenna’s range. The end result is an immensely satisfying problematisation of unmanned exploration or remote data transmission. The need to have communication networks in place means planning and launching the missions required to place those satellites into that orbit, as well as ensuring that the hardware on the satellites isn’t going to suddenly stop working, dropping a section of the net off line or the whole system if you decided to just chain the connections. 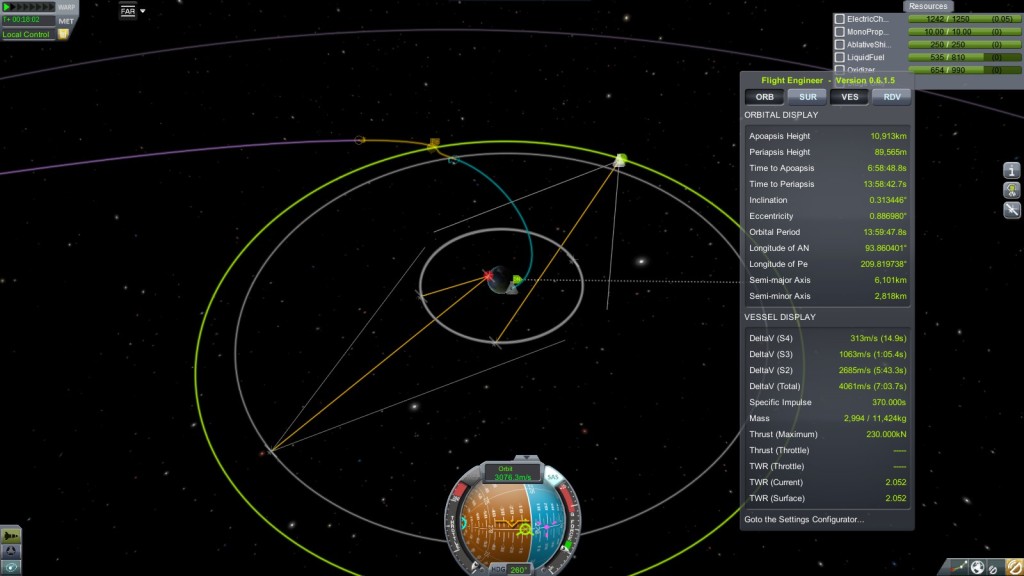 Related to Remote Tech somewhat is the TAC Life Support system. I would describe this as doing for manned missions what Remote Tech does for unmanned: It introduces a variety of different resource types that either decrease or increase according to their nature with regards to the crew. The obvious oxygen, food and water must be dealt with but there’s also a requirement for electrical power to keep these systems running as well as a waste resource that builds up. With TAC Life Support it is genuinely possible to have an orbiting tank of “waste” if the need arises. I’ve not pushed TAC Life Support in the release version yet, but the overall experience in the past has been very satisfying adding an extra layer of complexity and planning to missions. This is an addon that means it’s not likely going to be possible to accelerate time out of a problem, if the next intercept with Kerbin is years away then you either need to get out there are rescue your stranded little dude or accept that by the time he gets back to Kerbin there won’t be much left. The combination of Remote Tech and TAC Life Support go on to do for space what FAR and DR did for the atmosphere.

I’ve gone over just a few of my favourite and essential KSP mods here, and I will perhaps continue this list later as other vital mods are updated, mods such as B9 Aerospace and KW Rocketry, which are principally part packs, but very very good ones and the various graphical improvement mods that can make the game look amazing. Squad don’t seem set to reduce mod compatibility with KSP and they would be foolish to consider doing so. Modding allows KSP to be whatever game it is you want it to be and that truly represents a strength so significant that it puts almost every triple-A game to shame in terms of playability, replayability and well… fun. There’s a very good reason KSP is my most played game on Steam, and in general it’s probably beaten by the bastion of recent gaming Minecraft. My hope is that Squad will attempt to push KSP onto the newer Unity versions and as such allow a stable 64bit build, opening up modding opportunities massively as potentially vast amounts of memory are put on the table for mods to play with.