Continuing the theme of mods, we’ll be looking at a very recent mod-driven success story: Cities: Skylines (C:S). This is a game which was built from the bottom-up to encourage and support an active modding community and within days of release, that was exactly what happened. Along with Steam Workshop support and modding tools the game has a relatively open development structure, all of which have contributed to a quite astounding modding scene that has expanded even beyond the expectations of the developers. The way in which this has placed the game within the general gaming consciousness is fascinating, especially as we have a counter example in the latest SimCity release. I’ve discussed the relationships between these two games before but I think the modding aspect needs reiterating, especially with regards to both the developer and publisher’s attitudes. The SimCity that Maxis built for EA was as closed an ecosystem as it plausible, with minimal mod support in order to theoretically boost DLC sales and the always-online requirements theoretically squashing piracy. Compare this to the openness of C:S that Colossal Order intentionally built into the game and a publisher that is not only supportive of this modding but also free content updates as well as substantial DLCs, more in line with the traditional “expansion pack” than modern micro-transactions. These are all pretty convincing arguments in favour of a particular way of making games, I would call it the Paradox way, but they are just one among quite a few publishers and developers that are actually grasping this set of concepts. I think the key thing here, even looking at it from a “business” standpoint is that it turns out that having someone interested in the medium running things is actually better than having a profit orientated faceless executive barking senseless orders. Those people belong in the console market and the AppStore, where the market is a either as vacant as the executive or locked into a walled garden to the extent that they essentially have to accept it.

Speaking of free updates, this modding spotlight is interestingly timed as Colossal Order have just recently released their first major update to C:S. This update has added a significant amount of content including “European” style buildings with the aim to make the whole thing feel a little less US-centric. Interestingly these new building types also connect wall-to-wall to allow terraces, a very neat feature for those aiming to build cities in that style. The update also added tunnels, which has opened up a whole other dimension (or at least half of one) for fancy transport and road designs. This is in addition to a selection of bug fixes across all platforms, and all for free. This idea that Colossal Order release updates that build upon the elements of the game that aren’t quite as accessible to the modders is fantastic and I’m personally hoping that they add quite a significant new transport type to the game: bicycles. Designing a car-free city would be rather pleasant, living in one even more-so.

Discussing transport, it’s time to look at some of the mods that I would recommend for C:S. I’ll start with the Extended Public Transport mod which provides a far superior interface over what was to be fair a slightly clunky vanilla approach. This mod essentially allows you to properly manage everything from the small and basic public transport systems of a small city to the huge and complex public transport systems of very large cities, a pretty key thing. Following in the same vein is the Traffic Report Tool, which provides detailed information on traffic routing and road usage. With the complexities of road design escalating with the ever increasing size and population of a growing city it can be very difficult to pinpoint exactly what part of your road network is acting as the pesky bottleneck, unless you’ve got this tool! Of course once you’ve found what the problem with your road network was you’ve got the job of attempting to fix it. Within the vanilla game this may necessitate tearing out massive chunks of highway and the blocks that rely on it in order to fix the problem, unless you use the Extended Road Upgrade mod which will allow otherwise very troublesome road edits to be done fairly painlessly. I’ve seen this tool save entire neighbourhoods accidentally built upon one-way roads before, so it could well save your bacon too.

Next up is a garden-city tool, the Tree Brush which takes the individual placement of trees that whilst satisfying is a prime candidate for RSI and give you a scalable brush instead. This is such a simple thing, but has a dramatic effect and is one of those little mods that are vital. Speaking of vital mods, some find this next mod vital and many find it slightly inadequate: the Chirper Position Changer mod. Some find it necessary to exterminate Chirper altogether however I can’t quite bring myself to do that, as buried in those horrific hashtags as actual workable game information. I choose to view Chirper as a satirical entity, a tongue-in-the-cheek game mechanic, because anything else makes my head hurt a little. Continuing the theme of vital mods is the ever brilliant Automatic Bulldoze mod. Whilst this mod technically strips out a game mechanic, it wasn’t a particularly strong mechanic and was essentially a glorified game of whack-a-mole. Once certain city sizes are accomplished, the busy work of clearing out derelict buildings by hand is irritating at best so the inclusion of the above mod is very justified. 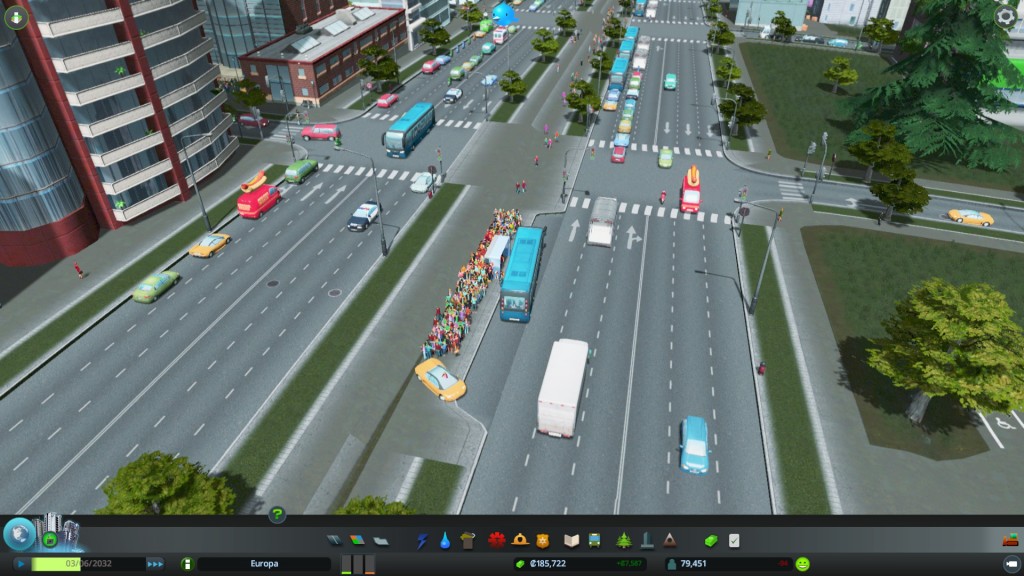 Mods aren’t just expanding the gameplay or fixing those little personal niggles, but also taking full advantage of the relatively open nature of Unity in milking whatever they can out of the game graphically. First of let us talk of the Dynamic Resolution mod which essentially uses resolution scaling to render in a higher resolution and shrink the image to the display resolution, providing a very significant improvement in visual results and significant anti-aliasing. In addition are the Ambient Occlusion and Sun Shaft mods which add their respective lighting improvements to the game, making the game even prettier but possibly at the cost of a little performance. Finally a mod that isn’t quite a gameplay mod and isn’t quite a graphics mod but is very cool: the First Person Camera mod. This allows the player to step down from their mayor-sky-throne and walk or drive among the people of their fine city, observing the intense amount of detail that Colossal Order put into the animations, models and textures up close.

This is only a small selection of what is a huge modding scene and ignores straight-up content additions such as new building and the like, but I hope it at least gives some impression of just what the modders are doing and what Colossal Order are helping them do, with Paradox Interactive there supporting the whole venture. C:S has an immense future ahead of it, not only in terms of modding but also free updates and hopefully substantial paid expansion packs. In this case the developers and publishers are doing things right and I’d say they’re being handsomely rewarded for this not just financially but also critically and in the popular realm. The game is in the minds of gamers, it still hits the gaming news and shows absolutely no sign of disappearing.