Not really sure where to start on “Ash of Gods: Redemption”. There’s a fare few things to talk about, some not necessarily about the game itself, but we have to start somewhere. So lets start with the game itself.

‘Ash of Gods’ is a 2D animated, RPG visual novel. From what I’ve seen around they really don’t what to call it a visual novel but that’s what it is. At least in its core elements. I know there’s a bit of a sigma around ‘visual novels’ but they’re not all bad and not all sordid affairs. It’s all just about story and the core part of this game is getting and piecing together information to understand the games big mystery. At least the mystery for one of the three story strands… This is why it’s hard to know where to start.

The gameplay is split into two parts, the narrative sections and combat sections. The narrative sections are the visual novel elements. You are either talking to people in a city or on the map dealing with random happenings. The combat sections are the RPG strategy elements with you placing your squad on to a grid battlefield, moving them about in a ‘move-to-move’ turn structure, with the sole goal being to defeat all the enemy forces. The structure of the combat is built well as everything in and out of the fight has to be considered. You move a unit then you opponent does the same and so on, but you can’t move that unit again until you’ve moved your whole team. It forces strategy and planning. You could go in with one unit and go turn to turn, or you can have a tactical squad and use team tactics. I went with the latter with a team always consisting of two archers, two heaves, a quick attacker and a healer. At least when I could.

I say ‘when I could’ because the game is split into three story strings that come together in the final chapter. This where the first of my quibbles comes in. It would have been better if the strings were completely separate and played individually. The best example I have is the way that Sonic Adventure 2’s story is presented. You finish one string, which unlocks the second, which unlocks the last. The reason why I say this is because the narratives for each string have very different tones.

The first (and core string) is the story of Thorn and his daughter. You start with their town being struck by ‘The Reaping’, a mystical event that kills many and can lead to the end of the world. The core story is Thorn’s quest to save his daughter from the reaping as his wife is killed leaving only him and his daughter. It’s a classic fantasy story of travelling the land to save the one you love. 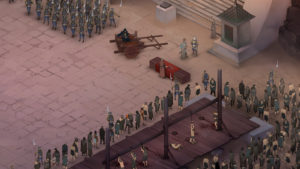 The last story is about Hooper who is an Umbra, the same kind as the reapers. His quest is where the mystery is as the only people that join him are there for dialogue only and he’s more ambivalent to the reaping as here was there at the previous one near 700 years ago. He makes it his quest to find out why it’s happening again and why this reaping is so different to the one before.

The game sees you play one chapter for each string at a time (chapter one for all three, then chapter two for all three, etc,) which I think spoils some of the intrigue. I can’t help but feel like it would be better to play through all of strings, up to the final confluence chapter, and then have the final chapter be the big conclusion. The ending cutscene does that leaving me going ‘what the hell was that? What just happened?’ but the road to get there was sometimes a march to mystery and sometimes a slow walk waiting for the next story section. Breaking them up would help the narrative flow.

But in doing that it would break one of the other things the game has, interactive story progression. You see, characters can die. All of them. Including the leading characters. There’s even an event around the mid-point where one of the leads can be straight up executed, (but it’s signposted in bright neon so it’s easy to stop).

Most of the character deaths can come from not having enough ‘strixes’. Strixes are a resource that protects you from the effects of the reaping. If you don’t have enough the characters get quickly damaged and if they get too damaged they die permanently. Damage can also be taken if characters are downed in battles but in the pause menu there is a ‘do-over’ option so it’s easy to just start over and take no damage. It’s the ‘save scum’ option and yes I took it a lot. I wanted to see the end of the stories damn it and I wasn’t going to drop down to story (easy) mode. It takes the strategy from the fights and I like to think I’m a smartypants so I did the deed and won with zero deaths.

I really did get invested in the story. It’s a Celtic/Germanic story with Russian twist that involves a lot of death and misery. Being a miserable asshole I thought it was great! I wanted to see Thorn fight to the last breath, I wanted to see Lo make the sacrifice, I wanted to see Hooper unravel the mystery.

But there is a quibble. A very big quibble that is the quibblest of quibbles. The dialogue at times is… not great. Originally I was going to say that it was because the writing was by a guy that didn’t seem versed in fantasy writing but the writer was Sergey Malitsky, a published fantasy writer since 2006. I say that because the language skews too contemporary, especially around the swearing. Before people start calling me a prude here’s what I mean.

Fantasy dialogue is meant to be grand and epic. Every word is a statement of scale and to a large extent the games wording fits that bill. But every now and then they say a contemporary phrase that breaks the verisimilitude. Having Hooper in his first chapter, after having a mysterious conversation with another supernatural being, saying ‘but if I find trouble I’m going to get the fuck out of there,’ is not good. It’s not fantasy wording and it’s only there so they can have Hopper swearing. He could of just said ‘but if I find trouble I’ll take my leave and leave you responsible’. Other characters say things like ‘we’re up shit creek’ and ‘we’re in the shit now’ which is just too contemporary for the setting they trying to create. It also happens so infrequently that when it does happen I just have to put my head in my hands and wonder why he decided to word it like that as reality comes back with audible sigh.

Before I get to my final conclusions there is the elephant in the room to deal with called the Banner Saga. Ash of Gods is very much inspired by Banner Saga right down to it’s visual style, combat mechanics, and story telling motif. They even kickstarted the game calling it a ‘Banner Saga inspired game’ and the developers of Banner Saga even chipped in some cash to the point where they are in the game, (the two lead developers appear in a random event and give you gold in a way too on the nose reference to actual happenings). Some have complained that this is just a rip-off game trying to ride on the coattails of it’s former and to an extent I can see that but I don’t agree.

My analogy would be comparing Ash of Gods and Banner Saga in the same way that I would compare Jak and Daxter and Ratchet and Clank. Two games that are very similar in style and but in the aspects of it’s design and plot are different. This is another reason why I think it would have been better to split up the story in to the three campaigns and the final chapter, as it would highlight the overarching mystery and the differing plot-lines of the three teams. I also think they shouldn’t have done the ‘decide who to follow’ final ending and gone for a single streamlined ending. From a narrative stand point there were two aspects to the ending and it should have been divided between the two characters leading to the logical conclusion to both characters arcs (not wanting to spoil anything). 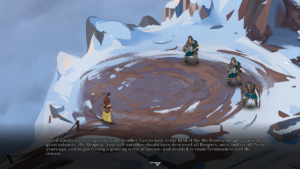 The only thing they need to do for part two (which I await with baited breath) is actually to cut things out rather than put more things in. You had me at hello! You didn’t need take walking breaks or start swearing. Just drive me to whatever that tower is and don’t stop accelerating!